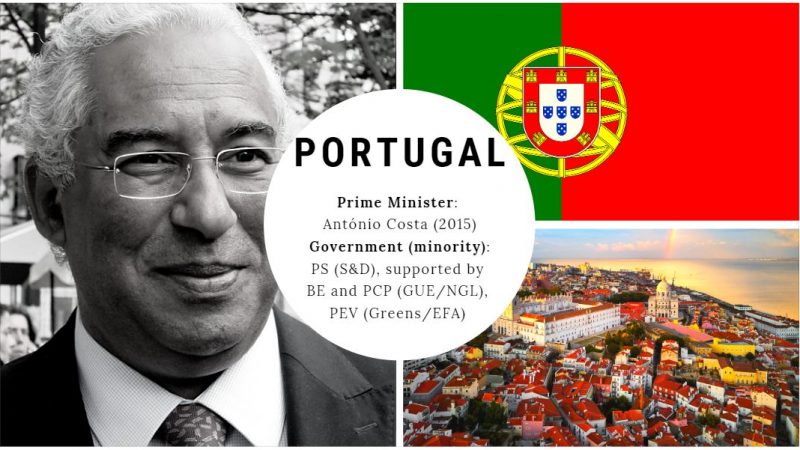 With a population of almost 10.3 million, it represents around 2.3% of all EU citizens (without the UK). Twenty-one (3%) out of the 705 members of the European Parliament (MEP) are elected in Portugal.

At the 2014 EP elections, turnout was 33.67%, below the EU average of 42%. Despite the low participation, and perhaps despite the euro crisis that struck Portugal, two-thirds (67%) of the Portuguese consider being part of the EU a good thing (8% have a negative view). Moreover, the euro is supported by 77% and 87% feel like citizens of the EU.

Portugal’s economic performance has been mixed in the past five years: while having escaped the euro crisis’ recession and exiting its three-year €78 billion financial bailout programme in 2014, its economic growth has been moderate, and is expected to slow down further, according to the European Commission’s (EC) latest autumn and winter forecasts.

Portugal moved towards democracy following the Carnation Revolution of 1974, which ended decades of dictatorship. Subsequent elections in 1975 and 1976 and a new constitution established a semi-presidential republic with a unicameral parliament.

The most important political figure is the prime minister, who is the head of government and shares political power with the president.

The political landscape has been dominated by the same political forces since the 70s: the social democrats (PSD) and socialists (PS), who have mostly alternated in power, occasionally with support from the Christian democrat CDS.

Despite Portugal’s economic turmoil caused by the financial and Euro crisis (and the subsequent bailout and austerity measures), the mostly bipartisan political landscape of the country has remained stable.

Between 2011-2015, Prime Minister Pedro Passos Coelho led a PSD-CDS coalition government and pushed through reforms and austerity measures to comply with the bailout programme.

These policies changed after the 2015 election, when a coalition led by the Socialist party (not being the most voted list) secured a majority in parliament with the Eurosceptic far-left (BE), communists (PCP) and eco-socialists (PEV). Led by Prime Minister António Costa, the government coalition raised public spending, minimum wages, incentives to business and social security transfers, while keeping the deficit at bay.

These policies initially raised eyebrows across the EU, especially in view of the Greek drama in the same year, but they complied with EU budget rules. While the results of these policies are yet to be seen, they have overall improved the country’s confidence.

The government came under heavy fire in 2017 as several forest fires killed more than 100 people. Nonetheless, the government survived the subsequent motion of no-confidence.

As the PSD implemented the most unpopular measures in the crisis, the mainstream centre-left has not experienced the loss of legitimacy like PSOE in Spain, even though  ex-Prime Minister Jose Socrates was indicted for corruption in 2017: the electoral coalition with the far left has proven popular in opinion polling and could see itself vindicated in the EP elections as well as subsequent national elections in October this year.

Relatively unaffected by the migrant crisis, Portugal now faces uncertainty because of Brexit, as the country remains largely reliant on tourism and holds an alliance to the UK dating back to the 14th century.

Recent projections reflect the current national setup, and show Costa’s PS steady at 38.5%, which would bring nine (up one) or even 10 MEP seats for the Progressive Alliance of Socialists and Democrats (S&D) and put it far ahead of the PSD, which enjoys around 23.4% of support, or just six seats for the European People’s Party (EPP). Moreover, CDS-PP could win two seats for the EPP as well, adding its total to 8 (up one).

The communist/eco-socialist alliance PCP-PEV is expected to see its support increase to 13.4% and give it 3 seats (no change), while the socialist Eurosceptic BE would win at least one seat (no change). Other political parties are not expected to win an MEP seat. However, much will depend on the actual turnout, which was just 33.7% before.

All in all, the PS bucks the trend of generally declining social democracy across Europe. If Costa’s PS and his coalition partners perform as well as expected, it could increase the chances of Costa continuing his political experiment.

Robert Steenland works as an evaluation and research consultant in EU policies, as well as an analyst in EU politics.  He holds a double degree master in European Governance

More news about EU elections in Portugal on EUnewsPortugal.com.