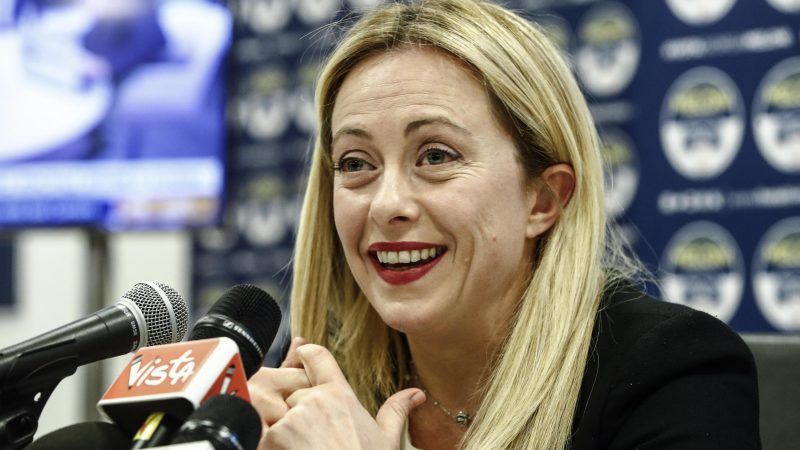 “Stop arguing. The centre-right coalition cannot risk jeopardising the result of the upcoming political elections. I will ask Matteo Salvini and Silvio Berlusconi to meet as soon as possible to avoid further divisions,” Meloni said in a video message on Facebook on Monday (27 June). [EPA-EFE/GIUSEPPE LAMI]

Fratelli d’Italia (FDI) leader Giorgia Meloni on Tuesday (6 November) met with the leadership of the Group of European Conservatives and Reformists (ECR) in the European Parliament to discuss a possible alliance after the 2019 European elections.

The FDI, created in 2012 following a split in Silvio Berlusconi’s People of Freedom (PdL) coalition, is currently sitting in the opposition ranks of the Italian parliament but it contested the March election in the centre-right coalition as a junior partner, together with Italian deputy Prime Minister Matteo Salvini’s Lega Nord and Berlusconi’s Forza Italia.

“Our aim is to give life to the next European Parliament for a major change, by building an alliance that includes everything from popular parties to sovereignists,” Meloni said.

During Tuesday’s meeting in Brussels, Meloni was introduced to ECR’s leaders by Raffaele Fitto, vice-chair of the Conservatives.

“We are ready to challenge the Europe of Brussels,” said Meloni and told reporters that her party wants to “build a Europe that knows how to defend identity, borders, the real economy, and it is also an important step.”

“Towards the birth of the great movement of conservatives and reformists, here are Raffaele Fitto and other parliamentarians who are helping us on this path,” she added.

Although no formal membership request has been made since the FDI has no MEPs in the current Parliament, the party aims to start the process to join the Conservative’s umbrella movement Alliance of Conservatives and Reformists in Europe (ACRE) as soon as possible, according to a party source.

A source close to the negotiations told EURACTIV that Meloni’s pitch met with a “positive reception” by the ECR leaders.

“Fratelli d`Italia joins the Group of European Conservatives and Reformists,” Meloni confirmed in a tweet.

“The group is led by the Polish government and the Visegrad group, which is our reference model,” she said in a Facebook video, adding that FDI shares the same political priority of defending borders and the strong focus on European identity and Christian roots.

Behind the scenes of what might be a significant alliance in Europe, there is also the attempt carried out by Meloni and Fitto to create a right-wing platform in Italy, which aims to offer an ally to Salvini’s Lega in the event of new national elections.

“We want to set a new, big movement that may be tying up with Lega to restore the government to the center-right and to get rid of the Five Star Movement,” Meloni said in the Facebook video.

“As FDI we will do our part with the group of Conservatives, which can be a fundamental bridge of dialogue between and the Le Pen-Salvini group,” Meloni said on Tuesday in Brussels.

This move comes shortly after Salvini has suggested to push his plan to consolidate the Eurosceptic right in the European Parliament – namely the European Conservatives and Reformists (ECR), the Europe of Freedom and Direct Democracy (EFDD) and the Europe of Nations and Freedom (ENF) – ahead of the 2019 May elections. Salvini has himself also held talks with the ECR leadership about possible co-operation, as well as with Steve Bannon, former adviser to US President Donald Trump, who is seeking to set up a common platform for nationalist parties across the EU.