Le Pen appeared alongside Dutch populist Geert Wilders in Prague to back local far-right lawmaker Tomio Okamura in his bid to hand the Freedom and Direct Democracy (SPD) party its first-ever seat in Strasbourg.

An alliance of populist parties including Italy’s League and Austria’s Freedom Party is expected to score in the vote but experts have cast doubt on its ability to cooperate in an environment where national interests come first.

“What we see here is the birth of a new European harmony with European national parties joining forces to offer 500 million Europeans a new framework for cooperation, a new project and a new potential for the future,” Le Pen told reporters.

At a rally in central Prague later on, she said that for the first time in these elections “the democratic movement of patriots in all countries allows a reform of the European framework.”

Her words echoed those of Italian League party leader Matteo Salvini, who visited Okamura in Prague earlier this month.

Salvini has recently called on nationalist parties scattered across the European Parliament to join forces and form a new alliance, which Le Pen called the European Alliance of Nations.

He expects the new bloc to be the largest in the 751-member parliament after the 23-26 May vote.

Parties like League, Alternative for Germany (AfD) or Denmark’s People’s Party foresee unprecedented gains in the vote as they campaign on anti-migrant, anti-Islam policies and promote national sovereignty.

The SPD favours a “Czexit” from the EU, just as Wilders’s PVV promotes a “Nexit”.

“If the EU cannot be reformed into a democratic bloc, we have to leave it,” Ivan David, a psychiatrist and the SPD’s top candidate in the EU vote, said at the rally.

Several anti-system parties have marked gains in recent national elections, including the Finns Party’s narrow second in a general election earlier this month.

But their ability to work together has been an issue.

“The problem with all these groups is that they cannot really cooperate, they are too focussed on their national interests,” independent Prague-based political analyst Jan Kubacek told AFP.

But Okamura insisted cooperation was already visible within the emerging alliance.

“We have the backing of Matteo Salvini, (and) of Austria’s Freedom Party, we cooperate even without Brussels’ diktat,” he said.

“We are able to make deals as national states,” added the Tokyo-born former entrepreneur who posed with Le Pen and Salvini on election posters to show that his party was “not alone in Europe”.

If an alliance emerges after the vote, it will have to pick a leader, with Le Pen and Salvini looking set to battle it out for the post.

“Salvini will have the upper hand in policymaking, the more so that he will most probably become prime minister,” said Kubacek.

“Le Pen will be very active in the European Parliament — she can’t really show her best in French politics so she uses the parliament as her second platform.”

Le Pen, Wilders and Okamura already met in Prague in December 2017 to hail the SPD’s gain of 22 seats in the 200-member Czech parliament in general elections. 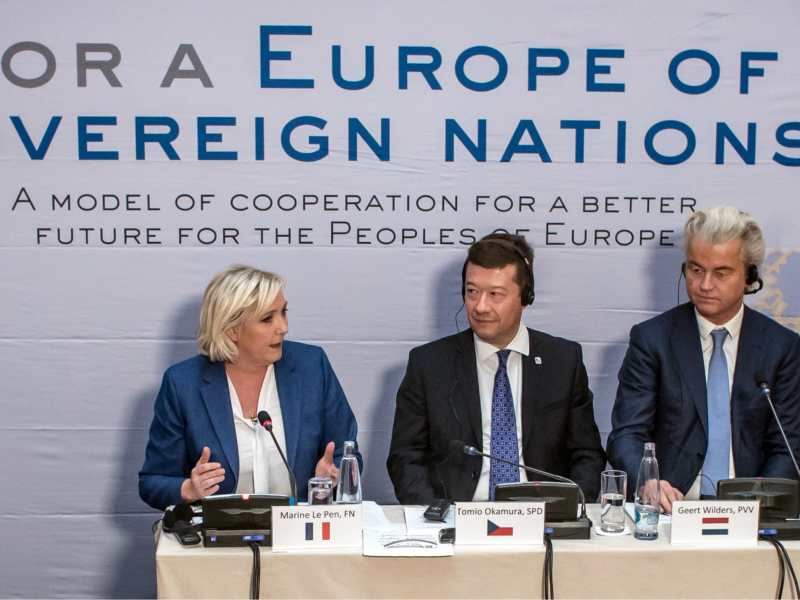 It impressed voters with an anti-migrant campaign, even though migrants have largely snubbed the Czech Republic for wealthier countries such as Germany.

“No to Islam” is the Czech party’s headline slogan for the EU vote too.

At the rally in Prague’s central Wenceslas Square, around a thousand SPD fans sported banners saying “People like Geert Wilders can save Europe” and “Migrants are not welcome”.

Several politicians talked to the sound of the “noise Olympics”, an event called to disrupt the far-right meet with drums and sirens and dispersed by riot police.

Meanwhile, Salvini has convened a big Milan meeting of anti-EU parties for 18 May, with Le Pen and Okamura expected to attend.