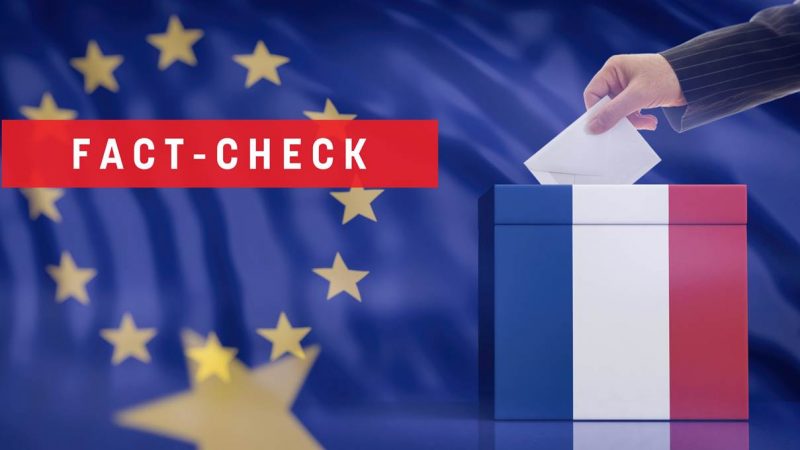 With his Renaissance list, France’s Emmanuel Macron aims to shake up the political scene in the new European Parliament. EURACTIV examines the accuracy of the campaign’s interpretation of EU electoral rules.

In early March, the French president called for a “European Renaissance” with an open letter addressed directly to the “citizens of Europe”, published in newspapers in all 28 EU member states.

On Wednesday (24 April), Macron’s La République en Marche (LREM), whose campaign is dubbed Renaissance announced the complete the list of 79 candidates running for the European elections in France.

According to the latest projections, LREM could win around 20-22 MEPs of the country’s 74* seats in the next European Parliament and appears to be slightly ahead of Marine Le Pen’s anti-immigration, far-right Rassemblement National.

LREM has repeatedly said that an alliance with the liberal ALDE group in the European Parliament might not be necessary, despite obvious affinities between the two.

Instead, ideas have been floated of forming an ad hoc coalition after the May elections rather than joining an existing group in the assembly.

Macron’s Renaissance list, made up of LREM and a loose alliance/coalition of other French parties and movements, now also carries candidates from seven EU countries (with double nationality) to reflect “a transnational ambition”, the Renaissance campaign announced on their website:

“Seven European nationalities are represented on the Renaissance list. Seven is the number of nationalities needed to create a political group in the European Parliament. Nationals from France, Greece, Portugal, Italy, Germany, Hungary and Belgium, all of whom have chosen to live in France, are united on our list for European Renaissance.”

It is seen as a prequel to the creation of a new political grouping in the next Parliament.

What are the stakes?

Putting aside the symbolism of LREM’s decision, however, most of the non-French candidates are placed below a realistic threshold anyway.

But while the idea does contain bits of truth, the assertion is nevertheless misleading.

As with everything in the European election process, such a step needs to follow an institutional process.

The Rules of Procedure of the European Parliament lay down the minimum criteria for a political group to be formally recognised as such in the hemicycle.

Rule 30 thus states that elected members may form groups according to their political affinities. However, it specifies:

Although the candidates on the Renaissance list might include nationals of seven different European member states, the French campaign may have misinterpreted the criteria.

“Parliament’s Rules of Procedure are pretty clear on this,” a European Parliament spokesperson told EURACTIV:

“It is not a question of nationality, but of country of election, and of being elected. A Group would need MEPs elected in at least seven different member states.”

“If the candidates from seven different countries and standing in those countries are indeed elected (and they are 25 or more), then, but only then, indeed would they be able to form a group on their own.”

What can be concluded?

Macron, it seems, most probably will not be able to avoid reaching out to like-minded parties around Europe if he wants to form his own grouping in the next European Parliament and have significant influence.

If, in the end, he does go for an alliance with the Liberals from ALDE, the group could become kingmakers in efforts to form a possible majority in the chamber.

* To be adapted according to the assumptions in a projected European Parliament with the UK (751) and without (705).

One response to “Fact-check: Could Macron form own political group in next Parliament?”