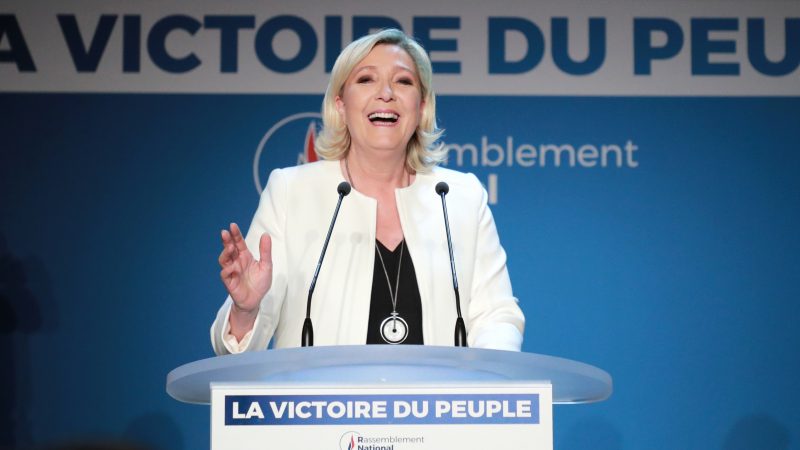 French far-right Rassemblement National (RN) President and member of French Parliament Marine Le Pen delivers a speech after the projections for the results of the European Parliament elections at the RN headquarters in Paris, France, 26 May 2019. [EPA-EFE/CHRISTOPHE PETIT TESSON]

The electoral campaign, which was led in the form of a clash between Le Pen’s Rassemblement National (RN) and Emmanuel Macron’s La République en Marche (LREM), eventually favoured the French far-right party.

“There has been a strong increase in voter turnout and this is excellent news for our democracy;” declared Prime Minister Edouard Philippe.

“The results of these European elections are like the first round of the French presidential elections. French people placed the far right in front. This is not the first time, but I will never be in the camp of those who are indifferent,” he added, regretting that “the far right is gaining ground, election after election.”

The anti-European party is in the lead with 23% of the votes, according to first estimates published by the French Institute of public opinion (Ifop). And Macron’s LREM is right behind with 22%. Despite its victory, Le Pen’s RN reached about the same percentage of votes as it did during the previous EU elections in 2014.

“The French people made their voice heard with an unexpected force. This is proof of a rise by the people against those in power. […] The EU cannot ignore such a call for freedom, for sovereignty,” declared Jordan Bardella, RN’s list leader.

The ruling party wanted to make this election a choice between the pro-Europeans and Eurosceptics. But the half-hearted campaign by LREM’s list leader Nathalie Loiseau did not work against the high number of people that voted for Rassemblement National.

On the European Parliament side, LREM will be sitting among the liberal group (ALDE), an alliance that was confirmed on Sunday.

The first surprise of these elections was the number of voters who cast their ballot. With expected voter turnout to be at 42%, like in 2014, participation ended up being far higher.

According to provisional estimates, the turnout was eight to ten points higher than during the last European Parliament elections and is expected to reach between 52% and 54%.

This unexpected participation even resulted in a few surprises.

While the two leading parties had similar results to what the pollsters had expected, the French Greens, right-wing party Les Républicains (LR) and even Jean-Luc Mélenchon’s La France Insoumise (LFI) scored some surprises.

The LR, list led by François-Xavier Bellamy, appears to be the first victim of these elections, according to a provisional result that is far below the latest estimates. Although pollsters indicated that LR would obtain between 13 and 15%, the LR list ultimately won only 8.2% of the votes, compared to more than 20% in 2014.

This was a resounding failure for the French right-wing party, which until now, had 20 MEPs in the European Parliament and will not see it halved to between 8 and 9 seats.

Another surprise defeat was the list of La France Insoumise (LFI) led by Manon Aubry. Jean-Luc Mélenchon’s party, which had been neck and neck at 8.5% with the Greens for several weeks, finally found itself at 6.7% according to preliminary results, like the joint list of the French Socialist Party (PS) and Place Publique led by Raphaël Glucksmann.

“RN in the lead, that is always bad news. We will continue to fight their anti-ecological and anti-social ideas,” said Manon Aubry, regretting the “disappointing results.”

The election confirmed the collapse of the French Socialist Party, which received 14% of the votes in the 2014 election.

“We had a higher than expected election score, but tonight we are not celebrating,” said Raphaël Glucksmann, regretting the result of the RN and the lack of unity on the left. “But the left in France is not dead […] tomorrow morning we will have to try to bring this left together,” he said.

However, the biggest surprise of these elections is the score obtained by the green party Europe-Ecology-Les Verts (EELV). The list led by Yannick Jadot obtained 12.8% of the votes, according to exit polls at 8 pm, while pre-election surveys had seen it at around 8.5%.

This green tide makes Jadot’s list the third largest French political force in the European Parliament. “I am very happy that particularly young people took part in the vote. It is a wonderful message for the future,” Jadot said.

One response to “France posts surprising results in the European elections”