For many Germans, the 72-year old veteran is the European Parliament’s most recognisable face. The MEP’s failure on Monday (7 January) to gather support for being proposed as a candidate for the European elections by the CDU board in his home state was therefore all the more surprising.

According to a correspondent from the German newspaper Die Welt, only 17 members of the CDU state board voted for Brok to have another mandate, while 20 voted against.

However, the result of the vote by the CDU board in North Rhine-Westphalia is not final. It is only considered a suggestion for the selection at the state representative assembly on 26 January. Brok could therefore still get a place on the list. So far, he has not stated whether he will stand. “The vote is just a suggestion,” Brok said.

Initially, Brok was lined up for the fourth position on the list and this was supported by the Minister-President of North Rhine-Westphalia, Armin Laschet. However, as a “sign of generational change,” Brok had said he was willing to stand as the sixth candidate on the list, which would have guaranteed him a good chance.

During the vote, Brok failed to gain the support of the eight district chairpersons and lost the race to Stefan Berger.

“I regret the fact that, by surrendering, he triggered a dynamic that ultimately turned against him,” Laschet said about the vote’s outcome. 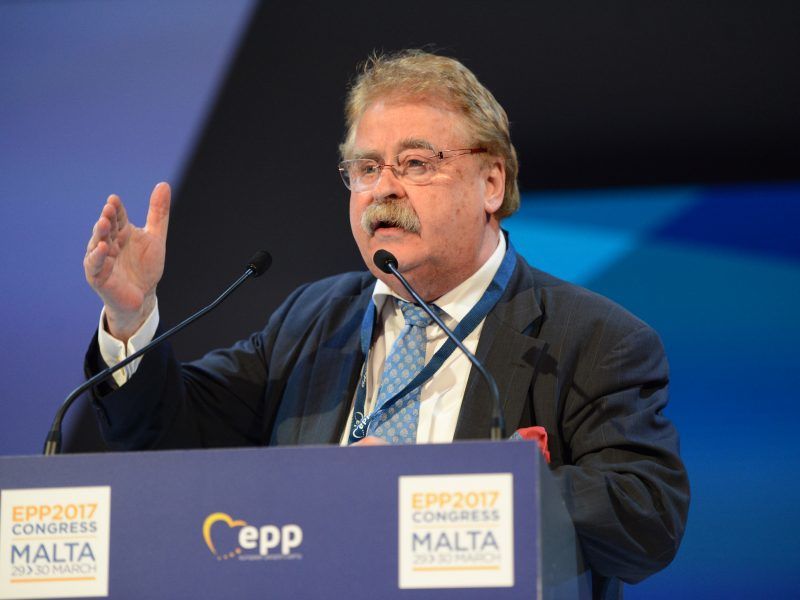 Brok, who is a close ally of Chancellor Angela …

According to the regional public broadcaster WDR, the CDU deputy chairperson in North Rhine-Westphalia, Ralph Brinkhaus, expressed disappointment at the outcome. “We’ll examine how we deal with this very closely,” Brinkhaus said.

On the other hand, Ina Scharrenbach, who is the chair on the North Rhine-Westphalia CDU board, was less surprised and spoke of a normal procedure for drawing up the list.

This could mean that, after 39 years in the Parliament, Brok’s influential career in European politics may be coming to an end.

Brok has represented the German Christian Democrats in the European Parliament since 1980 and is therefore the only MEP who has been there since the first European elections in 1979. He is seen as belonging to the old guard and has close relationships with Angela Merkel and European Commission President Jean-Claude Juncker.

As the chair of the EP’s Committee on Foreign Affairs, a post which he has occupied for 13 years, off and on, Brok was actively involved in addressing the situation in Ukraine.

Over his 39-year-long career, Brok was involved in the preparation of the EU treaties of Maastricht, Amsterdam, Nice and Lisbon. He is also the Brexit coordinator for his conservative European People’s Party (EPP) parliamentary group.

Elmar Brok: 'The idea that the EU will not advance any further is false'

EU treaty changes are laborious and come with a great deal of uncertainty. As a result, the European Parliament is assessing an own-initiative report that intends to assess what reforms of the functioning of the EU are possible without treaty changes. EURACTIV Germany reports.

The potential departure of a long-time colleague has certainly been noted in Brussels. Nevertheless, reactions to the events in Germany were restrained.

MEPs in Brussels did not want to comment on the CDU’s internal matters when approached by EURACTIV. However, parliamentary circles said his absence would be a loss for both Brussels and Berlin.

The opposition in Berlin was quite surprised. “Despite all our differences in content, this is a loss for the European Parliament,” said the former Green MEP, Franziska Brantner.

She said it was a mystery to her why the CDU in North Rhine-Westphalia no longer wanted to select Brok, one of the strongest pro-European advocates, even if he “sometimes upset people”.

She did not want to speculate whether Brok was rejected on age grounds. “There needs to be a mix of young and old. He doesn’t have to be the Spitzenkandidat.”

Sven Giegold, the spokesperson for Alliance 90/ The Greens MEPs, also tweeted of Brok’s absence as a loss.

“This would be a loss for the European Parliament,” Giegold wrote. “Elmar Brok is a wealth of experience in European policy for the CDU. Despite all of our political differences: this would be a regrettable weakening of pro-Europeans.”