Jean-Claude Juncker’s last State of the Union speech before the next European elections turned into a stocktaking of his mandate and a platform for political groups to set up their priorities for the electoral campaign.

Europe is going to the polls in May next year and the political groups are preparing for the campaign. During Juncker’s speech on Wednesday (12 September), they paid tribute to his ‘European spirit’, but rather than react to his proposal for the next few months, MEPs called for an alternative Europe in the upcoming elections. 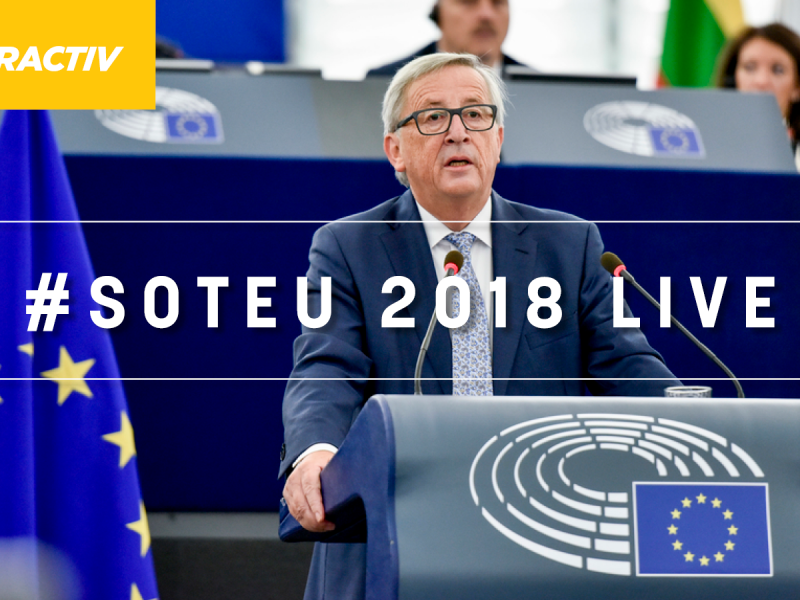 On Wednesday morning (12 September), Jean-Claude Juncker delivered his final State of the Union address to this European Parliament. Check EURACTIV’s coverage on how the speech went down and how everyone is reacting to it.

Manfred Weber, leader of the European People’s Party, who has announced his intention to run for the Commission presidency next year, even described the Commission’s policies as a success for himself.

“We created growth and a good perspective for future,” Weber said, pointing to a reduction of the migratory flows or unemployment rates, as well as the economic policies that boosted growth.

“I cannot remember that Dijssembloem, Tsipras or even Moscovici presented any kind of alternative proposal on how we should answer the challenge which was on the table,” Weber said, referring to the former eurogroup president, Greek prime minister and the Commissioner.

The EPP leader highlighted as priorities the need for a fair taxation and a new deal for the European labour market, in what seemed to be his agenda for the upcoming electoral campaign.

Weber was not alone in coming early to the electoral campaign – so did the ALDE leader Guy Verhofstadt.

“Leading the European Union is not a matter of mathematical strength, it is also a question of moral authority,” Verhofstadt argued in regard to the internal divisions in the EPP over whether to trigger article 7 against Viktor Orban’s government in Hungary.

Verhofstadt pointed out that this alternative might be built in the ideas expressed in French President Emmanuel Macron’s speech at La Sorbonne, with whom ALDE is in negotiations to potentially join forces for the upcoming elections.

The European left criticised the little importance Jean-Claude Juncker awarded in his speech to the Social Pillar he promised to build four years ago, and the lack of ambition of his social policies.

Social Democrat leader Udo Bullmann greeted the role Juncker has played as president of the Commission, as “a real political leader”. However, Bullman said, the issue is “whether or not our institutions and policies are up to the task we must deliver.”

Bullmann does not believe Europe has left behind the crisis it has faced over the past few years. Migration, climate change, the divide between North-South and East-West or the lack of development of a Social Europe are issues that are still around. And his comments were echoed by GUE chair Gabi Zimmer.

Bullmann, as well as Green co-leader Ska Keller and GUE chair Zimmer, asked Juncker to work on deepening the Social Europe, which should help counter the rise of populism both in the North and in the South.

We do not need “only nice declarations and intentions, we need a social Europe,” Keller stressed. “Ten years on from the start of the financial crisis, the level of prosperity of the pre-crisis era has still not been reached with few citizens benefitting from tentative growth,” Zimmer stressed.

She underlined that the main threats to Europe were coming from the inside, with the rise of populism and nationalism.

“It is only thanks to those courageous people who were marching for freedom and for democracy that today in Europe we have democracy,” she recalled.

Euroscepticism on the rise

Changing the course of the debate, Eurosceptic members of the Parliament said the upcoming elections would be a referendum on the very existence of the European Union itself.

“Is the EU in a better shape now that it was when you took office? I think the answer is clear: no,” said Polish conservative Ryszard Legutko, who argued that people’s discontent with the EU has been growing for years.

“You are a charming man but when you were talking I thought, my god, we are living in two different worlds,” Legutko said. To which Juncker replied he indeed did not want to live “in this world made of hatred”.

UK’s Nigel Farage accused Juncker of trying to centralise more and more power in Europe with his proposals. But people, Farage argued, “do not have a sense of European identity but a great sense of national identity.”

According to the British MEP, that is the red line between Juncker’s vision of Europe and “what has been repeatedly said by the electors”. The real state of the Union, EPP MEP Janusz Lewandowski underlined, “we will see in the result of the elections in 2019.”