By Der Tagesspiegel with agencies | translated by Daniel Eck 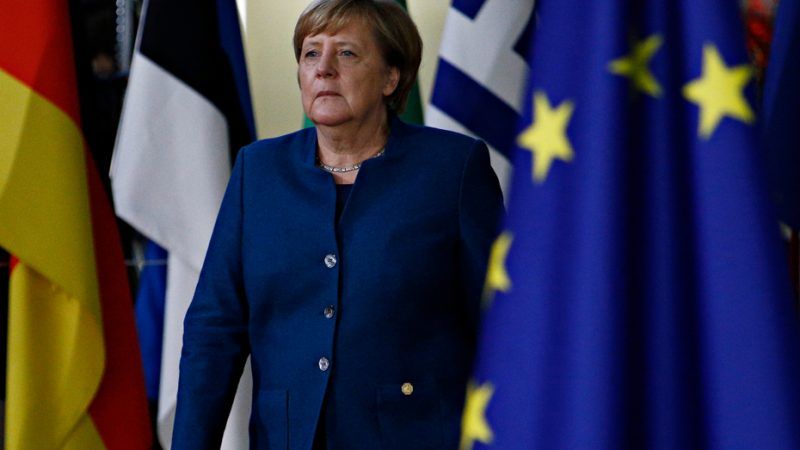 In an interview with the Bavarian newspaper the Süddeutsche Zeitung (15 May), Merkel announced that she would be working even harder for the future of Europe than before. [Alexandros Michailidis/ Shutterstock]

Chancellor Angela Merkel is showing great concern for the EU and emphasising an increased sense of responsibility for Europe. Could she have plans to move to Brussels? EURACTIV’s media partner Der Tagesspiegel reports.

Statements by Chancellor Angela Merkel from the Christian Democratic Union (CDU) that highlight her increased sense of responsibility for Europe, have fueled strong speculations about her possible transition to important EU positions.

In an interview with the Bavarian newspaper the Süddeutsche Zeitung on 15 May, Merkel announced that she would be working even harder for the future of Europe than before.

“Many people, including myself, are worried about Europe. This gives me an even greater sense of responsibility to take care, together with others, of Europe’s fate,” she said in the interview.

European Commission President Jean-Claude Juncker recently made clear that he considers it possible for Merkel to take on a role at EU level following her time as Chancellor.

“I cannot imagine Angela Merkel to just disappear,” he told Funke Media Group at the end of April. “Not only is she a person who commands respect but also a complete and loveable package,” he added. He also said “she would be highly qualified” for an EU job.

In various speculations, Merkel is usually mentioned as a possible successor to EU Council President Donald Tusk. In such a position, she could offer her great experience as a mediator.

In the same interview, Merkel admitted she has some reservations about the Spitzenkandidaten process in the European elections.

“If you ever read the press from five years ago, you know that I have always expressed a certain scepticism about the Spitzenkandidaten principle,” Merkel told the Süddeutsche Zeitung.

But Merkel was a “good member” of the conservative European People’s Party (EPP), which included the principle from 2014 into its statutes and internal regulations.

“The EPP’s top candidate is Manfred Weber and, in the event that we become the strongest political force in the elections, I will do my utmost to ensure he becomes president of the European Commission,” she added.

At last week’s EU summit in Sibiu, several EU heads of government, such as French President Emmanuel Macron, spoke out against the idea that only those who had previously been the Spitzenkandidat of one of the European political groups could lead the new European Commission.

The European Parliament, which confirms the Commission president after the European elections, following a proposal made by leaders at an EU Council, introduced the Spitzenkandidaten principle for the first time in 2014.

Merkel dodged the question of whether she would rather see Jens Weidmann as president of the European Central Bank (ECB) than Weber at the Commission helm. Weidmann is currently the head of the Bundesbank.

“Now I am supporting Weber’s bid for the Commission president. That does not rule out Germany having other outstanding personalities for other EU offices,” she said.

After the European elections, EU governments will have to decide on several top EU positions, including that of the president of the Commission, of the EU Council, of the ECB, and the High Representative for Foreign Affairs.

The Chancellor also indicated that she and Weber do not always share the same views on certain issues.

There were “several positions” on how to assess the German-Russian Nord Stream pipeline project. Weber came to a different solution “from a pan-European perspective”, but Merkel’s position was “compatible” with German and European interests.

While Weber is calling for an end to the pipeline project, Merkel favours the amendment of the EU’s gas directive and talks of an “astonishingly consensual way” of doing so. Nord Stream 2 is expected to transport gas from Russia to Germany and is particularly controversial in Eastern Europe.

Unlike Weber, Merkel did not plead for the immediate termination of EU accession negotiations with Turkey. Although recent events after the local elections did not make Turkey’s membership more likely, she referred to “common interests” with Turkey in light of the war in Syria and Islamist terrorism.

Along with Merkel, French President Macron is likely to play a key role in the distribution of top EU posts following the European elections on 26 May. Although Merkel admitted to having diverging opinions to Macron, she still considers their relationship to be solid.

“Of course, we are wrestling with each other. We have different mentalities and have differences in our understanding of our roles,” she said. This had already been the case with former leaders of the two countries.

Nevertheless, Germany and France continue to “of course, agree on broad issues” and always find compromises. “In this way, we are doing a lot for Europe, even today,” she said.

Asked if her relationship with Macron had deteriorated in recent months, she replied: “No. Not at all.”

The Chancellor also rejected the accusation that, in comparison to Macron, she provided less impetus for European policy, that he was regarded as the reformer and she as the one ‘pulling the brakes’.

“We always find a middle ground,” she said. Merkel cited “enormous progress” in defence policy for example. Both countries decided to develop a fighter plane and a tank together. “It is a great mutual compliment and a sign of trust to rely more on each other on defence policy issues,” she said.

The Chancellor also referred to differences in offices and political cultures.

“I am the Chancellor of a coalition government and much more committed to parliament than the French president, who is not even allowed to enter the French National Assembly,” Merkel said.

This even applies to the issue “of possibly acting independently from the US, even if I do not really want to be in such a situation.”

*This report has used material from dpa, Reuters and AFP