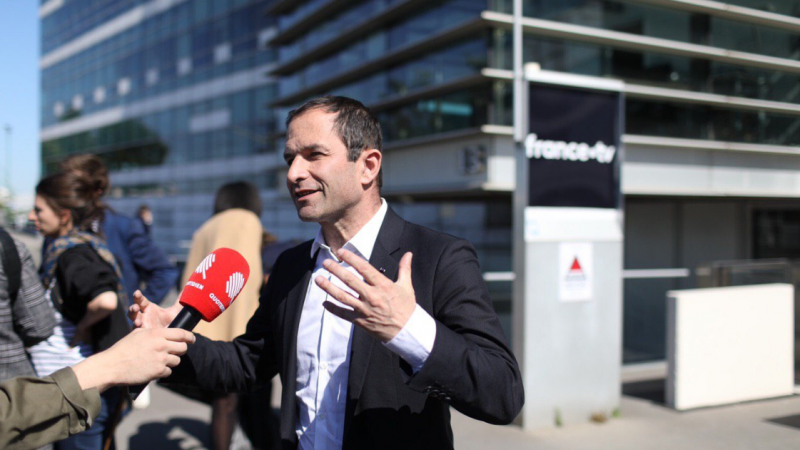 The EU election debate broadcast on France 2 next Wednesday (22 May) is causing growing controversy. Guests from minority parties have argued the structure of the debate is biased against them, and have threatened to boycott the programme. EURACTIV France reports.

There is nothing like a common enemy to unite a mixed bag of warring politicians.

Despite radically opposed programmes, the three list leaders have united against France Télévisions by meeting in front of the public broadcasting group’s headquarters and protesting its programming schedule.

France 2 intends to broadcast the second part of the debate very late on the evening of 22 May, after an earlier debate between major French parties.

A “democratic scandal”, according to the three candidates.

France 2 and France Inter are organising a debate on 22 May between 15 European election list leaders or party leaders. This inclusive choice was aimed to avoid a repeat of the candidate revolt which erupted during the first debate in April.

The question of the number of guests had already been a real headache for the public channel. Several candidates had initially been excluded from the first debate for logistical reasons. Then, some appealed to the courts to claim a right of presence. They included Benoit Hamon, François Asselineau, Ian Brossat and Jean-Philippe Lagarde.

The public channel had decided to invite candidates from minority parties, even though the French State Council agreed with the decision, stating that the channel was free to choose its guests.

But the number of candidates made preparations for the big debate difficult.

With 12 guests on set, the TV debate had turned into a cacophony. And each candidate only had 8 minutes to speak and present their political programmes. This is an excessively short time for a 3-hour debate that gathered a modest audience of 2 million viewers.

To avoid these two pitfalls, the channel decided to invite everyone, a total of 15 top candidates or party leaders,  but divided the debate into two parts.

But this is unacceptable for the group debating during the second part.

“If we three are here, despite our different opinions, it is because we all agree that this is unacceptable because it really is a democratic scandal,” Nicolas Dupont-Aignan told the press, along with Benoît Hamon and Jean-Christophe Lagarde.

Candidates proposed several alternatives, such as a draw between participants that would decide who debates during which time-slot.

France 2 is also being criticised for inviting party leaders of Le Pen’s Rassemblement National, Macron’s LREM and right-win party Les Républicains for the debate, as opposed to candidates who are at the top of the European elections lists for other parties.