Audience of Thierry Baudet's Forum for Democracy party during the results evening of the Provincial Council elections and the water board elections in Zeist, the Netherlands, on 20 March 2019. [Bart Maat/EPA/EFE]

Controversial eurosceptic Thierry Baudet’s Forum for Democracy party came from nowhere to be the second biggest in parliament’s upper house after Rutte’s, an exit poll by leading broadcaster NOS said.

The coalition led by Rutte’s centre-right VVD party is set to collapse from 38 to 31 seats in the 75-seat senate, which passes legislation approved by the lower house.

The blow for Rutte — who painstakingly formed his ruling coalition to freeze out the far-right after general elections in 2017 — will be closely watched abroad ahead of European Parliament elections in May.

Self-proclaimed intellectual Baudet — who faced criticism after failing to stop campaigning after Monday’s shooting on a tram in Utrecht in which three people died — slammed Rutte’s record on immigration. 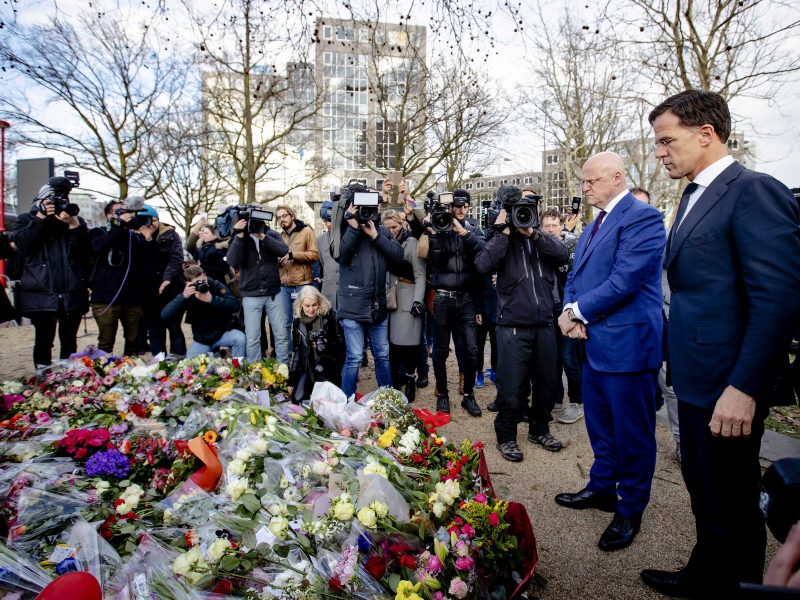 Dutch voters on Wednesday (20 March) head to provincial polls billed as a referendum on Prime Minister Mark Rutte’s policies, after a campaign overshadowed by a possible terror attack on a tram.

“We are being destroyed by the people who are supposed to be protecting us,” the telegenic 36-year-old told a crowd that chanted his name on Wednesday night (20 March).

It comes days after a suspected terror attack in Utrecht.
https://t.co/Q8823HqWGM

“Successive Rutte governments have left our borders wide open, letting in hundreds of thousands of people with cultures completely different to ours.”

Referring to the fact that the Turkish-born Utrecht suspect had only been released from jail two weeks ago, he added: “We have seen it in Utrecht on Monday, rapists and thieves go free. It’s shameful.”

Baudet has previously called for a “Nexit”, or exit from the EU by the Netherlands, but has recently backtracked on as the chaos over Britain’s departure from the bloc escalates.

The flamboyant former academic is known for controversial statements such as “women in general excel less in jobs and have less ambition”.

After eight years in power, Rutte, meanwhile, is an influential figure in Europe including in its Brexit negotiations, but the result leaves him vulnerable at home and needing to rely on other parties to pass legislation.

“We are going to have to get to work,” Rutte told supporters. “We have to talk with other parties so we can continue to lead this country well.”

Rutte’s VVD is set to drop from 13 to 12 but the other coalition partners took a hammering with the left-leaning progressive D66 falling from 10 to 7 and the Christian Democrat CDA from 12 to 8, although ChristenUnie rises from 3 to 4.

The anti-Islam Freedom Party led by far-right politician Geert Wilders is set to win six seats, down from nine, but could be influential if it teams up with Baudet.

Long a standard bearer for the far right in the Netherlands and more widely across Europe, the bleach-blonde Wilders appeared to have lost seats to the newer figure of Baudet.

Rutte could now be left to rely on opposition parties to pass legislation, including the leftist ecological party GroenLinks (Green Left) party led by Jesse Klaver, which had a good night and is set to double its seats from four to eight.

Senate members will officially be decided in May by the 570 representatives elected to the country’s 12 provinces in Wednesday’s election.

The head of the Dutch socialist party had called the vote a “Rutte referendum”, although Rutte has insisted he would not step down if his coalition lost its majority.

However after nearly a decade in power, Rutte has been widely tipped to take up a top EU post in Brussels when the current set-up led by European Commission chief Jean-Claude Juncker steps down later this year.