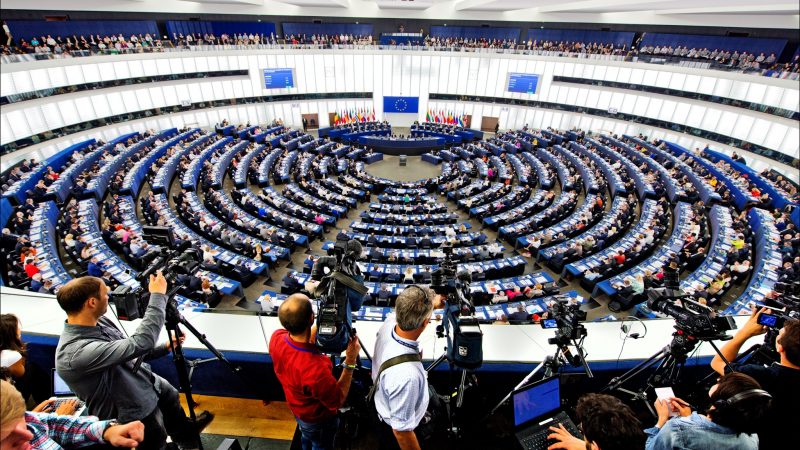 Ever wondered how many of the newly-elected MEPs are on Twitter? Or what issues they care about? EURACTIV has dug into the figures, with help from PoliMonitor, a political technology company.

PoliMonitor, which monitors the Twitter accounts of over ten thousand parliamentarians across Europe, has revealed the Twitter statistics of newly-elected MEPs.

Of the 751 European Parliament deputies scheduled to take office on 2 July, 611 have an active Twitter account. Over the last 12 months, PoliMonitor categorised 598,470 individual Tweets coming from those accounts and analysed them.

With more than 450 EU deputies expected to take their seats for the first time, PoliMonitor’s analysis provides precious insights into the new Parliament and suggests that the new Hemicycle will look and act very differently from the previous one.

First, a word of caution. Politicians love Twitter, Facebook and other social media because it allows them to engage with potential voters online and broadcast their opinions on policy matters.

But no matter how many followers you have or how much you Tweet, it is no guarantee of winning an election.

Socialist candidates could probably confirm that. Even though candidates from the Party of European Socialists (PES) tweeted more than others by a wide margin (120,971 Tweets), their seat numbers still dropped from 185 to 153 after the May poll.

Similarly, the centre-right European People’s Party (EPP), which has the second greatest number of Tweets (115,606), won 182 seats, 34 fewer than in the previous Parliament.

But despite those caveats, there is also a clear pattern emerging: Political parties that tweeted the most were also the ones that won the most parliamentary seats, as shown in the graph below: 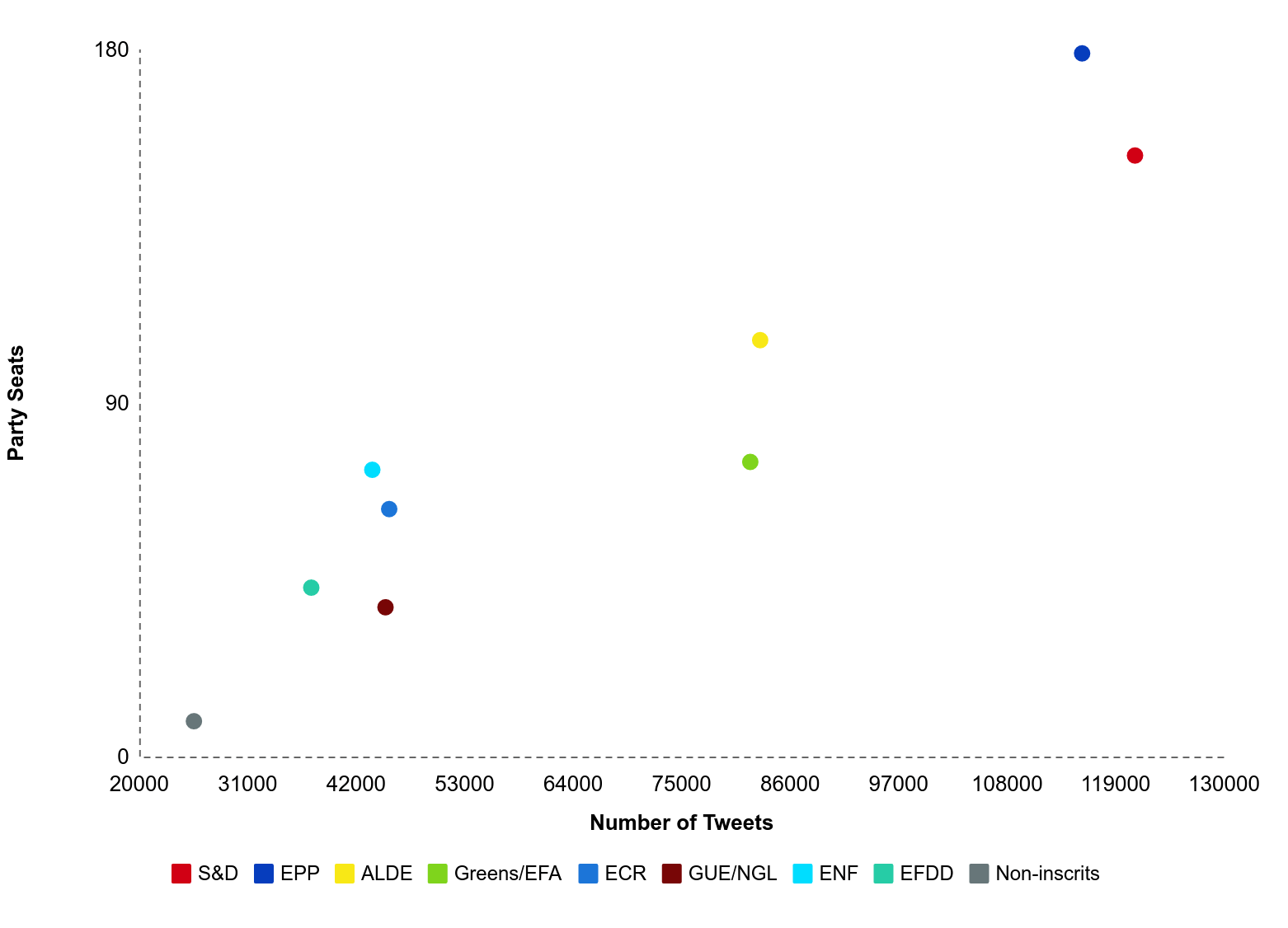 A pattern does emerge between MEPs tweeting more and gaining seats in the EU Parliament. [Hannah Archambault/EURACTIV]

“As such, it is unsurprising that the parties who made gains in the European Parliament this year far out-tweeted those parties that did not,” said Sam Cunningham, the co-founder of PoliMonitor.

“The frequency of tweeting by European groups during the 2019 election campaign seems to suggest that, in general, the more active parties gained as a result of their Twitter activity,” he told EURACTIV.

Parties which Tweeted less were among the biggest losers

Perhaps one of the biggest lessons from the European Elections was the rise of the European Greens and the liberal ALDE group (now Renew EU), which won 75 and 106 seats respectively.

Although they are smaller parties, their candidates tweeted as much as, and often more than their EPP and PES rivals, according to PoliMonitor.

“The analysis suggests a general relationship might exist between activity on social media and electoral success,” Cunningham said. “But the case is still to be established what other factors might affect a possible correlation – including message discipline and creativity on Twitter – and additionally if any causational relationship exists.”

PoliMonitor noted, however, that some candidates bucked this trend, including MEPs from the European Left, which saw their share of seats in the Parliament decrease significantly despite higher than average activity. 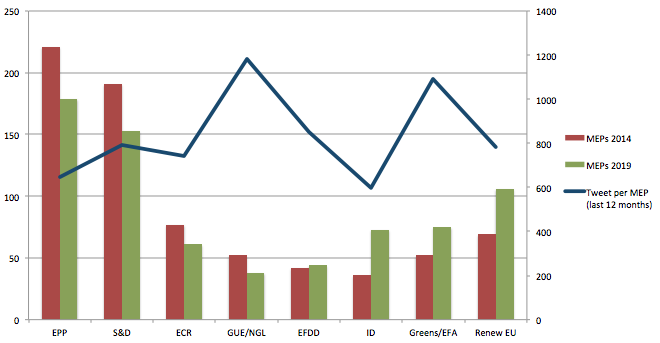 The analysis also reveals that female MEPs are embracing social media more than their male counterparts.

And despite their lower numbers, female MEPs are not far behind in terms of how many tweets they post.

Overall, however, the European Parliament remains male-dominated. Women only make up 39% of all MEPs elected this year, even though the proportion went up from 36% five years ago.

At 60%, men still hold the majority, showing the gender gap that still hasn’t been completely broken. 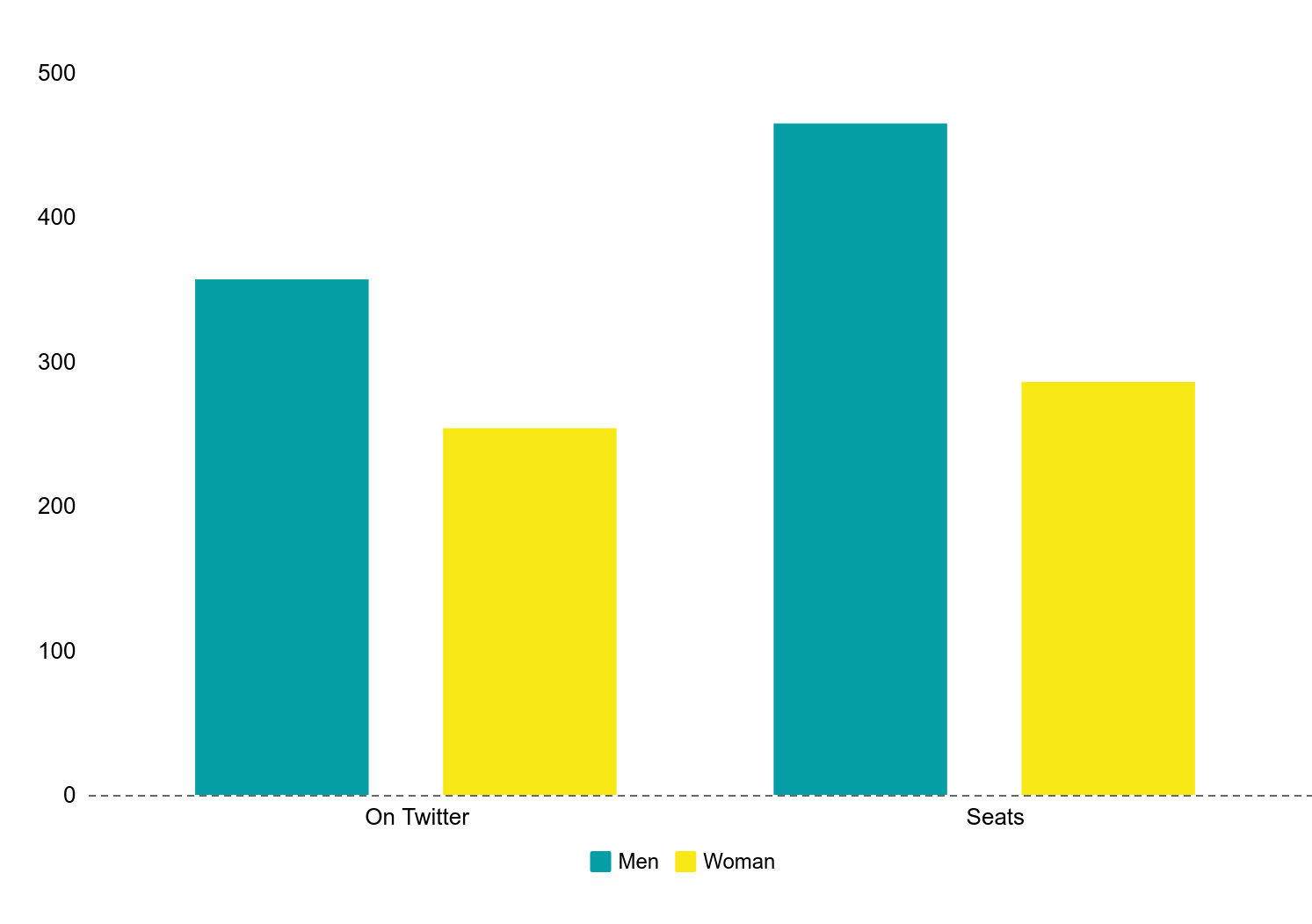 UK MEPs Tweeted the most

With about half of the Twittersphere using English as the main language, it is no surprise that Brits dominate the country ranking of which MEPs Tweeted the most. And with such a turbulent crisis as Brexit on hand, candidates had plenty to talk about, tweeting 93,805 times in total.

Given that Germany has by far the largest population in the EU (82.8 million people), it is interesting to note that they were out-tweeted by the likes of Spain, which has 31.6 million fewer people.

The top Tweeters were mostly not from major parties. Lance Forman (Brexit Party) took the top spot with 3,248 tweets. As a prominent Brexiteer, his main goal was to argue in favour of a swift exit of Britain from the EU.

Also third is Tomáš Zdechovský (3,245 tweets), a centre-right Czech politician from the EPP who focused his tweets on the corruption accusations leveled at Prime Minister Andrej Babiš. 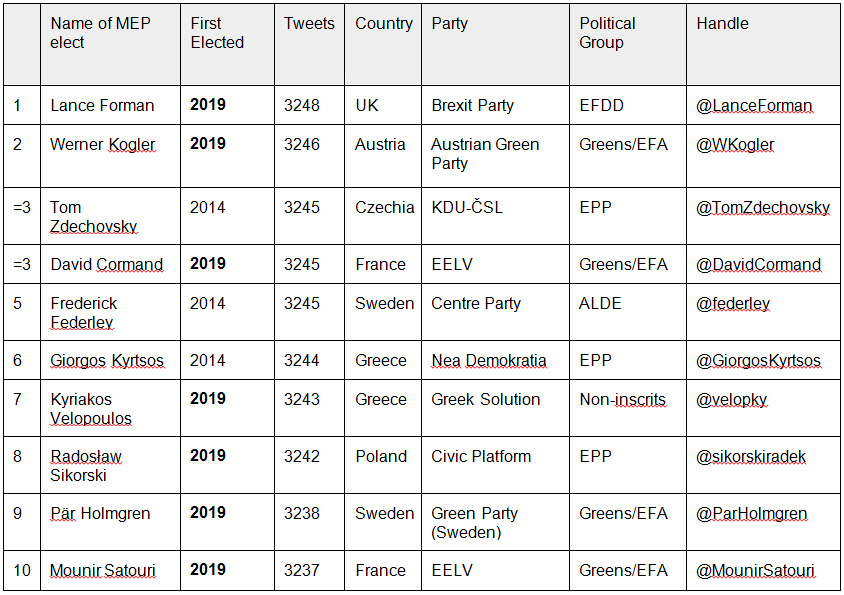 What’s on their minds

Perhaps unsurprisingly, #Brexit was the most frequently used hashtag by would-be MEPs on Twitter (6,382 occurrences). The UK’s heated Brexit debate seems to have triggered a marked pro-EU shift among MEP candidates, who expressed worries that other countries might follow suit.

The push for environmental issues such as climate change comes up as another dominating theme, with hashtags such as #Klimat, or #climat appearing frequently. This reflects the good score by the European Greens, who were able to win 75 seats in the EU Parliament, up from 52 in the 2014 assembly.

Copyright and internet freedom were also frequent subjects of debate, especially in Germany where hashtags such as #Uploadfilter and #Artikel13 came up frequently (530 and 451 times, respectively).

In France, #Macron was the most frequently used hashtag (2,091 occurrences), even though his centrist LREM party lost the election to the far-right National Rally whose hashtag #OnArrive was used 1,331 times.

Interestingly, the #Macron hashtag came up 2,275 times across Europe overall, while #Merkel appeared only 666 times (we don’t recommend reading into that number too much though). 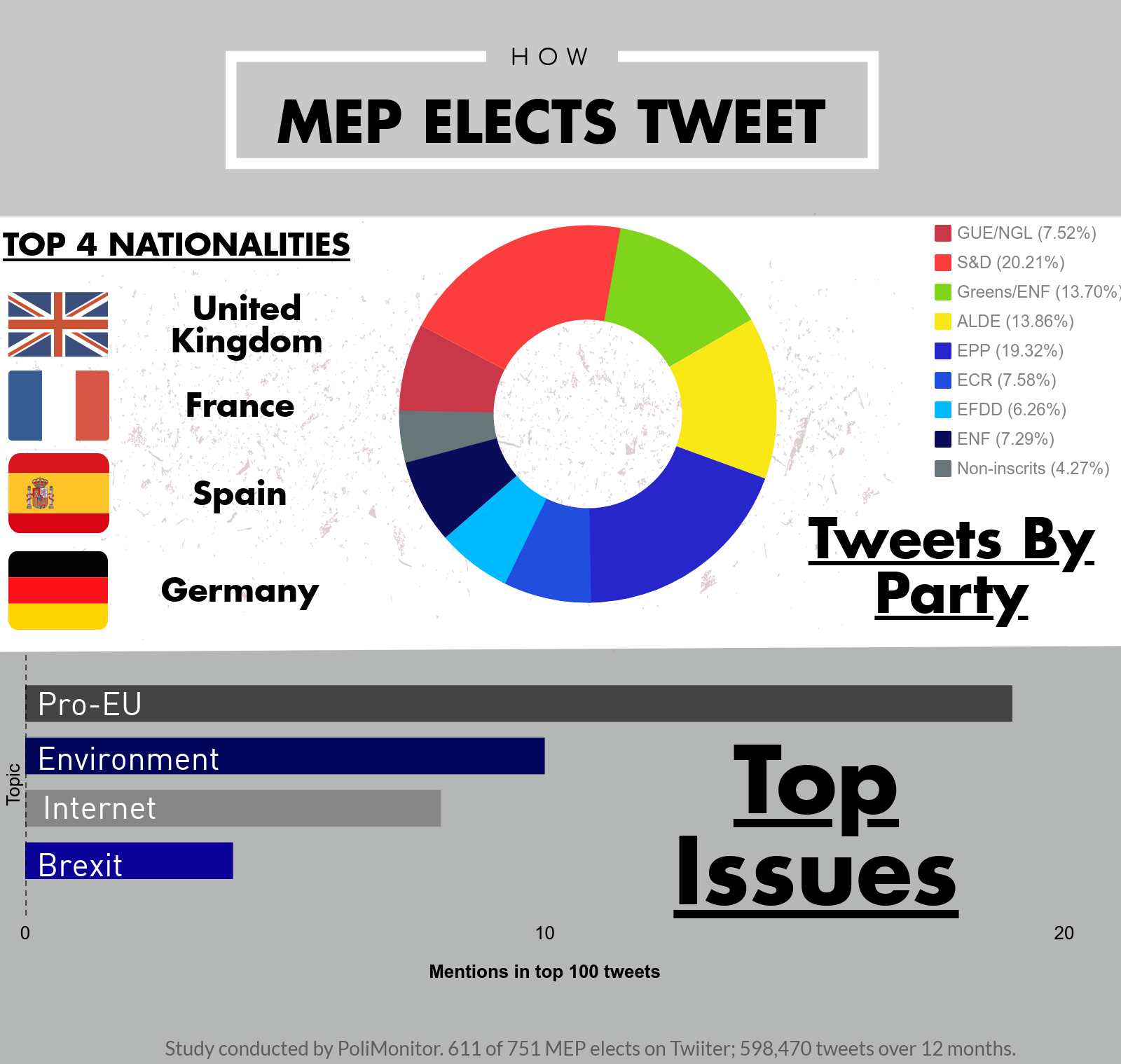 According to Cunningham, the newly-elected MEPs will increasingly take debates outside the Hemicycle and on to social media.

“This development should be welcomed as it offers the prospect of greater levels of transparency, scrutiny and crucially public awareness of their work and engagement in these important policy discussions,” Cunningham said.

PoliMonitor’s analysis indicates that “European unity, copyright laws, climate change and environmental issues more broadly will be among the top priorities for the new Parliament,” he said.