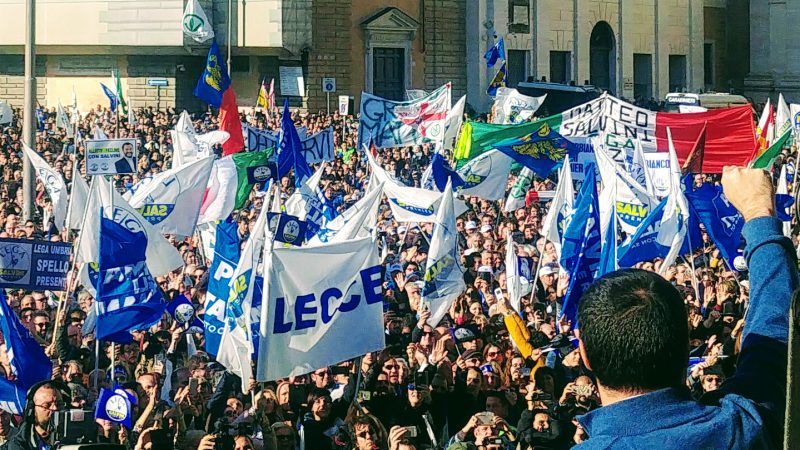 Thousands of Italy's right supporters were gathered in Rome by League's leader Matteo Salvini who asked for confirmation of his political line. [Gerardo Fortuna]

Salvini asked for a mandate to personally negotiate with the EU on behalf of the Italian people, marking the start of League’s political campaign for the next elections in May.

Having imposed a radical shift in the nature of the League, turning it from a separatist party into a national one, Salvini is now trying to fuel resentment toward the current EU establishment. The opposition to the European project, and particularly to the euro currency, is still really strong within the League.

“I ask you the mandate to go deal [with the EU] with respect, not as a minister nor as a [representative of the] government, but on behalf of 60 million Italians that want to cherish hope and leave Italy better than they found it,” he said on the stage in Piazza del Popolo.

He explained that such a mandate did not concern at all the ongoing negotiations with the European Commission over the Italian budget plan, but was about a broader change of the European Union from the inside.

The card of being not against the EU, but against “this” EU, has been already played many times by Viktor Orbán and other Visegrád leaders.

Salvini’s pompous entrance to the sound of “Nessun Dorma” – the world famous aria from Puccini’s opera Turandot that says Vincerò, I will win – marks the fully-fledged start of League’s campaign for the European elections.

Europe never took such a central part in a League’s rally before.

The League’s manifesto for the last national elections formulates the goal of reestablishing the European Union as it was before the Maastricht treaty.

Salvini took these ideas further, lashing at those who in his words betrayed the values of the 1992 treaty and promising that his force will put in place “a new European community founded on respect and solidarity.”

According to Salvini, Europe that only focuses on inspections and economic indicators is doomed to failure. “We want to see it rise, smile and work,” he added.

Salvini expected more than 100,000 attendees and the organisers said at the end that roughly 80,000 people had filled Piazza del Popolo, but the fact remains that the square’s real capacity is around 30,000.

EURACTIV spoke to League supporters and activists, which appear highly sceptical about the “strong powers” in Berlin, Paris and Brussels.

However, the participants interviewed seemed to view positively the path of dialogue started with the European Commission and the EU in general.

Although League’s ministers, regional governors and mayors went up on stage, Salvini stole completely the show.

Salvini’s personality cult among League supporters is pretty impressive, but it should be reminded that in the past they showed the same kind of devotion to the former leader and founder of Lega Nord, Umberto Bossi.

Rumours that Salvini could be the Spitzenkandidat for the far-right alliance are growing. He has said that he will start thinking about it from March. 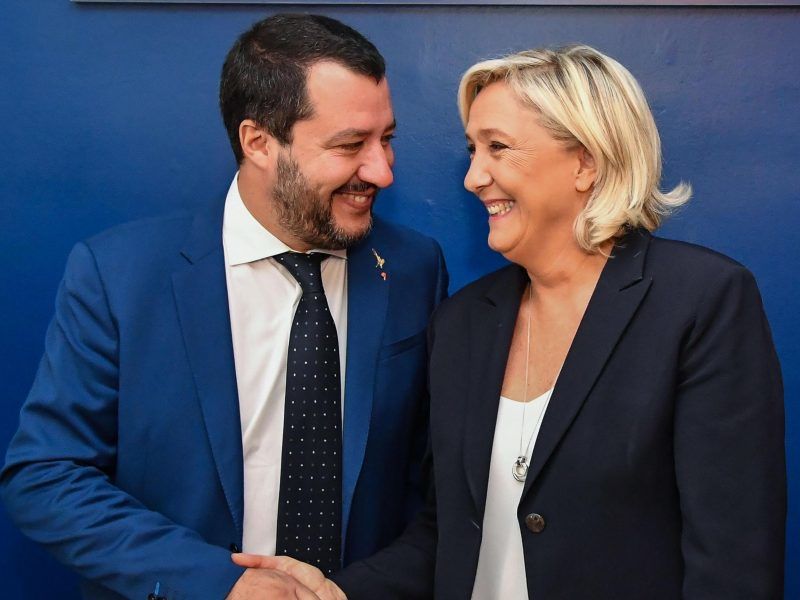 Salvini gets ready for Spitzenkandidaten battle

Italy’s far-right Interior Minister Matteo Salvini is considering running for the presidency of the European Commission if a coalition of nationalist groups wins the next EU elections, he said in an interview Thursday (18 October).

Asked what would be better: Salvini as Italian prime minister or Commission President, one activist from Lombardy found an easy answer: “Salvini is always better”.

“We need him here, for now,” said a woman from Apulia, adding that it would be enough put at the top of the Commission someone who shares his ideas.

All the supporters interviewed backed Salvini’s political line, particularly the anti-migration policy. An isolated criticism was expressed of the flat tax [a fixed 15% tax rate for companies and individuals], an electoral promise that League had to give up.

Salvini called on his supporters to be united, since other parties would try to split League in the coming months.

This message was explained to EURACTIV by a League activist from Lombardy, who admitted that contrary to some perceptions, divisions persist within the party.

“There are at least three groups of supporters: the ones still loyal to former leader Bossi who never stopped to demand independence for Northern Italy, the nationalist ones that Salvini has attracted, and the newcomers from the south of Italy that were members of the centre-right before,” the source said.

According to the supporter, the latter group had not earned Salvini’s trust yet but was still strategic for the League’s expansion all across Italy.

Asked if the original League supporters are happy with this new nationalist line, he said that there was just one way to reach to same old goals.

“We tried first with the independentism, then with the alliance with Berlusconi, then with fiscal federalism reform in 2011. The ‘national’ League is just the latest attempt of a reinvent itself process,” he said. 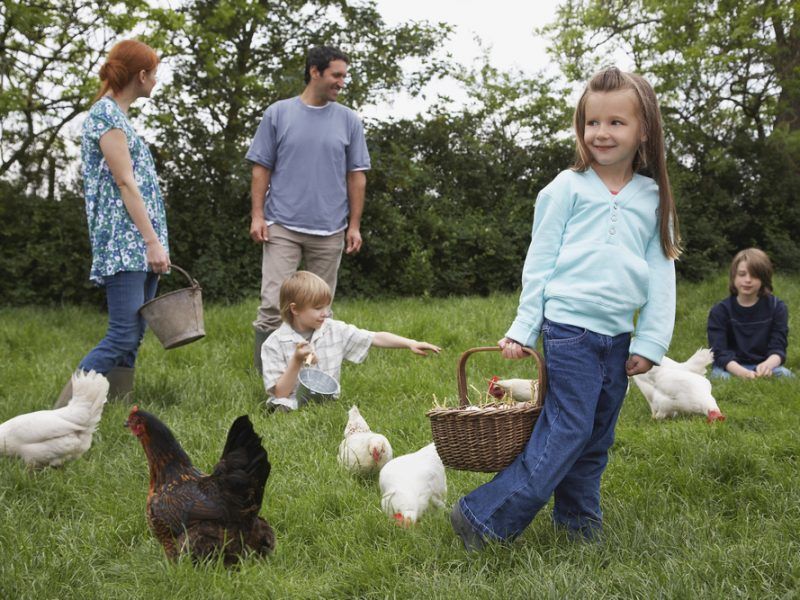 'Third-child' policy: Italy’s Lega wants to give farmland for free to large families

Italy’s populist government is proposing to give land to families about to have a third child, hoping it would help fight the growing depopulation of rural areas and abandonment of arable land. But it has not been embraced by everyone.

Salvini also made reference to the ‘yellow vest’ protests rocking neighbouring France, in an obvious attack on the economic policies of French President Emmanuel Macron.

“Those who sow poverty reap protests, those who sow false promises reap the response of those on the margins and the countryside,” he told the cheering crowd.