Activists hold posters reading 'Stop fascism' before the judicial proceedings at the Supreme Court in Bratislava, Slovakia, 29 April 2019. The Supreme Court will decide on the dismissal of the Marina Kotleba - People's Party Our Slovakia (LSNS). A motion for the dismissal was filed by General Prosecutor Jaromir Ciznar in May 2017. [Jakub Gavlak/EPA/EFE]

The Kotleba-People’s Party Our Slovakia (LSNS), which campaigns against letting migrants into the country, entered the 150-member parliament for the first time in March 2016. It currently has 13 seats.

The court ruled that “there was not enough evidence to ban the LSNS party”, she added.

Prosecutors asked for the ban in 2017, arguing the party was working to subvert democracy. They said at the time they had received some 170 formal complaints requesting the ban. 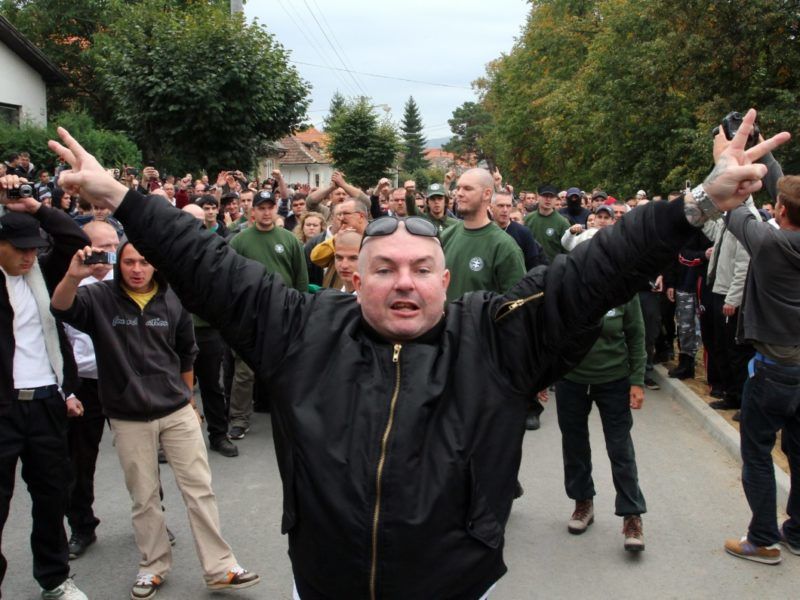 “LSNS is a fascist party,” Justice Minister Gabor Gal told AFP before the verdict. “Fascism has no place in Slovakia.”

Party chief Marian Kotleba, 42, is notorious for having led street marches with members dressed in black neo-Nazi uniforms before he entered parliament.

Marian Kotleba, a far-right politician notorious for his anti-Roma rhetoric and appearances in a Nazi-style uniform, has won the local election in the Banská Bystrica region of Slovakia by 55.5%, sending a shockwave to the political class ahead of the European elections.

Hostile to both Slovakia’s sizable Roma minority and the established elite, he was repeatedly detained and charged with hate speech, chiefly against Roma, before becoming an MP.

Kotleba responded to the ruling by thanking the judges for “their personal bravery”.

“We were aware that our party never violated any law and we never endangered democracy in Slovakia,” he told reporters.

“After today, there is no reason to be afraid to vote for our party.”

The LSNS is currently registering 10.5% voter support in the latest opinion polls. It has candidates running in the forthcoming elections to the European Parliament.

Kalman Petocz, president of the Slovak Helsinki Committee for Human Rights said he was not surprised by the ruling.

The court “may not have wanted to interfere in the upcoming European Parliament elections” to be held on 25 May, he said.

“There are so many anti-Semitic, homophobic and anti-Roma statements made by mainstream Slovak politicians that, on these grounds, many political parties could be banned,” he added.

“We have to fight extremists at the political level rather than at a judicial one.”

Kotleba unsuccessfully ran for president in March 2019, winning 10.4% of the vote.