Police said around 45,000 people packed Colon Square and surrounding streets for the event, which came just two days before the high-profile trial of Catalan separatist leaders opens in Madrid over their role in Catalonia’s failed 2017 independence bid.

Organisers said over 200,000 people took part on the rally held under the slogan “For a united Spain. Elections now!”.

Under the shadow of Colon Square’s huge Spanish red and yellow flag, demonstrators bussed in from all over the country heard speakers call for the defence of Spanish unity.

The rally was called by centre-right Ciudadanos, the conservative Popular Party (PP) and far-right Vox, which has only recently burst onto Spain’s political scene, as well as a handful of smaller far-right groups.

They are angered by Sánchez’s decision to take a more conciliatory tone with pro-independence parties, whose votes are crucial to the legislative agenda of his eight-month-old minority government, saying it amounts to “treason”.

Polls show that between them the PP, Ciudadanos and Vox would win a majority if a general election were held today, giving them the combined parliamentary clout to drive Sánchez from office. 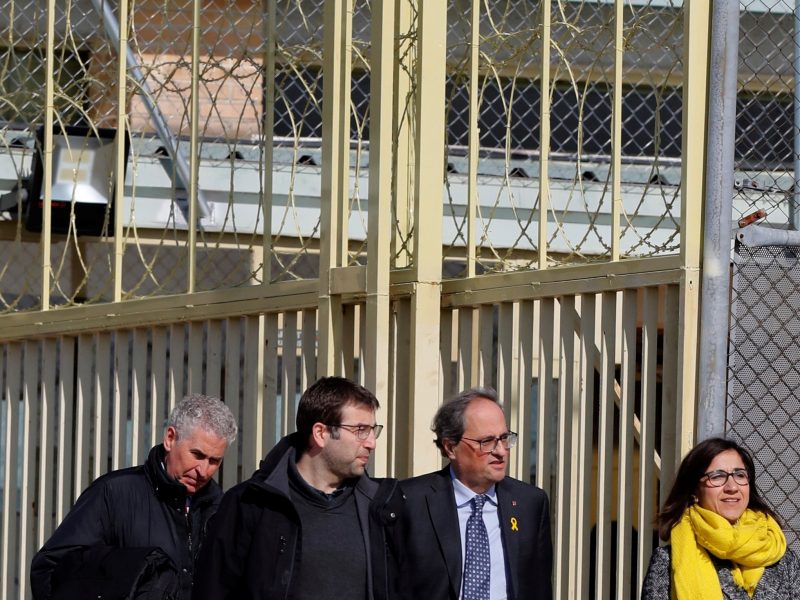 Far-right Spanish party Vox is on track to get a global soapbox as it takes part in the much-hyped trial of Catalan pro-independence leaders as a “popular prosecutor” — a Spain-specific legal mechanism that has left Madrid embarrassed.

The three parties won a majority in a regional election in the southwestern region of Andalusia in December, ousting the Socialists from power in the region after 36 years.

“The government of Sánchez’s time is up,” PP head Pablo Casado told reporters before the start of the rally.

“We are here to say no to separatism and yes to Spain,” added Ciudadanos leader Albert Rivera.

Sánchez, who came to power in June with the support of Catalan nationalist parties, defended his government’s attempts at dialogue with Catalonia.

“The government of Spain is working for the unity of Spain,” he told a party rally in the northern city of Santander.

Elena Navarro, who attended the anti-Sánchez rally in Madrid with her teenaged son, said Sánchez was “a traitor”.

“He is making pacts with our enemies, with people who have caused us great harm and want to divide Spaniards,” the 45-year-old told AFP.

Former French prime minister Manuel Valls, who was born in Barcelona and is running for mayor of Spain’s second largest city, and Peru’s Mario Vargas Llosa, a Nobel Prize-winning author who became a Spanish citizen in the 1990s and has spoken out in favour of conservative Spanish causes, were among those who attended the Madrid protest.

Conservative parties called the rally after Sánchez’s government last week accepted the presence — as requested by Catalan separatists — of an independent “rapporteur” in future talks.

Despite the government’s concession, Catalan separatist parties still refused to back the government’s 2019 budget and both sides on Friday called off their talks, with each side blaming the other for ending their dialogue.

If Sánchez is unable to approve his budget, he could call elections before his term is over in 2020.

Spain will hold municipal, regional and European Parliament elections in May.

Ana Guisasola, a 50-year-old who works for a motor lubricants firm, said she had voted for the PP and Ciudadanos in the past, but now plans to vote for Vox, which she called Spain’s “last hope”.

“I want someone who will grab a broom so that Spain can move forwards,” she told AFP at the rally.