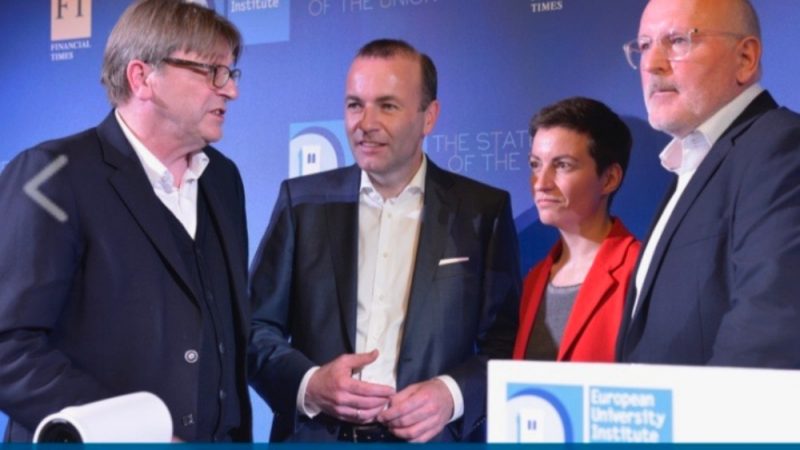 The controversial subject of the EU’s future plans for a common army provoked lively exchanges during the second Spitzenkandidaten debate on Thursday (2 May), just three weeks before the European polls.

With security and defence likely to become one of the main priorities for the next European Commission, the most confrontational moment revolved around the question of whether the EU should pool its military resources.

However, the issue exposed a rift along party lines, with both Verhofstadt and Weber speaking out in favour, while Timmermans and Keller voicing their opposition against the plans.

“The biggest waste of money in the European Union is the military, the way we organise it,” Verhostadt said.

“We spend nearly half of the Americans, we spend three times more than the Russians on the military in Europe, but I am not sure if the Russians come this way that we are capable to stop them. A European army of 20,000 people in 2024 – let’s do it.”

His comments feed into the current state of play around the bloc, whereas there are currently approximately 178 different weapon systems in the EU, compared to only around 30 in the US.

Critics for long had been pointing out that despite the EU spending half as much as the United States on defence, the effective outcome is only seen to be half as efficient.

In a nod to Verhofstadt, Weber defended the vision of the EU army and called for “great ambitions” when talking about the future of European defence.

“It’s a fundamental idea to never have war again in Europe. It’s today unthinkable, and with a common European army it would be totally unthinkable.”

“I’m really into big dreams,” Green candidate Keller responded. “But if the one, big dream for Europe is about an army…”, she said asking the questions the other candidates did not provide an answer to: “Who would send such an army into action?”

Keller criticised the lack of coherency in EU foreign policy: “That also related to weapons exports. We need to have a European weapons exports control agency that looks at whether the criteria for exports are fulfilled, which is for example definitely not the case with Saudi Arabia.”

Critics had pointed out that the “European army” talk so far has not brought any concrete information on whether such a step would mean pooling resources and equipment, or also involve the pooling of political decision-making.

Timmermans, former Dutch foreign minister, who has in principle a sense for federal European visions, declared the project unrealistic.

He scolded Verhofstadt, telling him not to “over-promise”, and that “there will be no EU army for the foreseeable future.”

Instead, the Dutchman called upon member states to make small steps in deepening their defence cooperation as it already is happening with joint projects in the framework of the EU’s permanent structure cooperation (PESCO).

He suggested to first reorganise the European defence industry to make it more competitive against non-European counterparts, which made it one of the more concrete albeit not new proposals on the matter.

Timmermans also confronted Weber on being incoherent towards European integration demands: “So you do not want a common fiscal policy,” Timmermans noted towards the Conservative, “but want an EU army? There’s a contradiction there.”

Although the EU treaties provide for the gradual definition of a common defence policy, the main takeaway from the debate was that a common plan for further European security and defence integration could be difficult to achieve in the next term due to lack of common definitions.

Unanimity is still required for EU foreign and security decisions.

Both Weber and Verhofstadt also called for the creation of an EU version of the US Federal Bureau of Investigation (FBI) to better coordinate information-sharing and fight security threats across the bloc.

Timmermans, however, poured cold water on the idea, saying that there was no point “as long as we can’t rely on national law enforcement”.

“I am not sure I would like to see all my date being transferred to Hungarian authorities,” joked Keller, providing one of the rare moments to break the rather stiff debate.