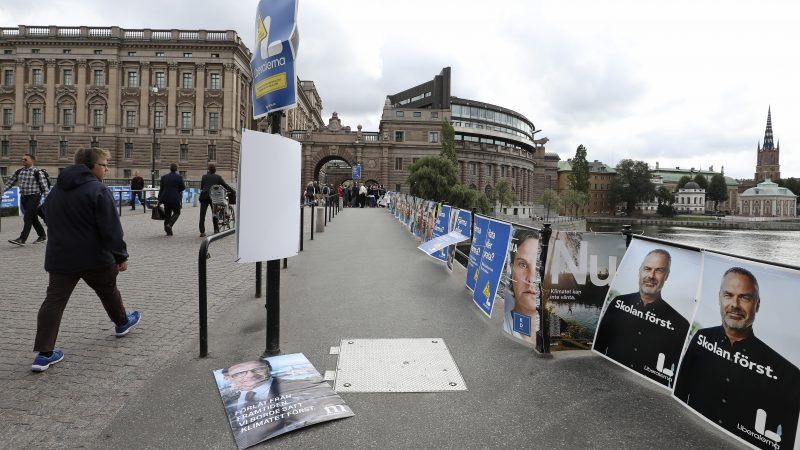 People walk past election posters near the Swedish parliament in Stockholm, Sweden, 10 September 2018, a day after the country's general election. [Soren Andersson/EPA/EFE]

With nearly all votes counted on Monday, the ruling centre-left Social Democrats and Greens and their Left Party parliamentary ally had 40.6% of the vote, while the opposition centre-right Alliance was on 40.3%. 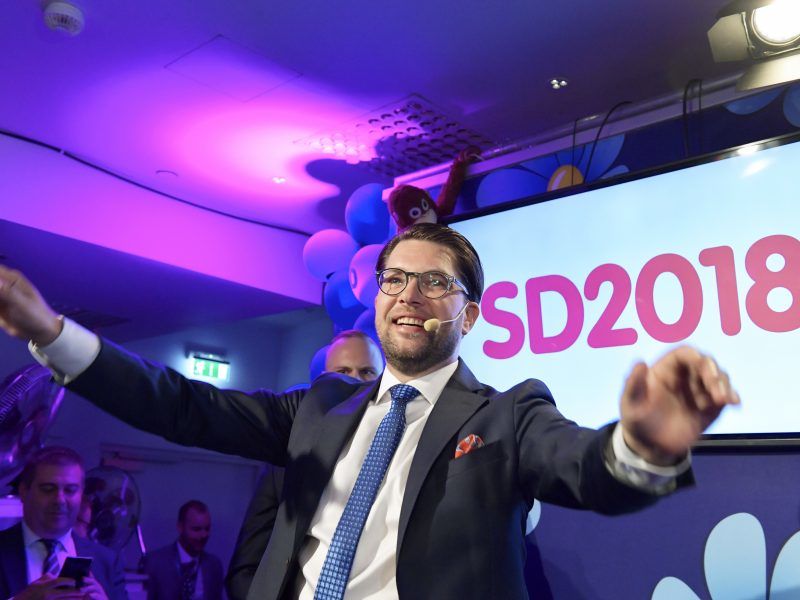 That translates into a single-seat advantage in the 349-member Riksdag.

The Sweden Democrats, a party with white supremacist roots, won 17.6%, about 5 percentage points more than four years ago. It was the biggest gain of any party and in line with conventional opinion polls but fell short of the 20-30% their leader Jimmie Åkesson had predicted.

The election result is on the Swedish newspapers. Neither the center-left nor the center-right bloc obtained a majority in the legislative elections, and the far-right Sweden Democrats solidified their position as the country's third-biggest party. (VCG/Jonathan Nackstrand) pic.twitter.com/Rr3xAt5kNA

The Sweden Democrats’ success follows a rise in popularity of other far-right parties in Europe amid growing anxiety over national identity, the effects of globalisation and fears over immigration boosted by conflicts in the Middle East and Africa.

Åkesson was adamant his party holds the balance of power. “We won’t participate in letting through a government which doesn’t give us influence,” he told TV4. “On the contrary, we will do what we can to bring down any such government.”

Åkesson’s overtures found few takers with a letter inviting the right-wing Moderates (EPP-affiliated) and Christian Democrats to talks being instantly and publicly rebuffed.

Unless parties on the centre-left and centre-right break ranks with their blocs, it is likely to be impossible to form a stable government without some kind of support from the Sweden Democrats, who want the country to leave the European Union and freeze immigration.

Sweden Democrats wants to negotiate with Moderates and Christian Democrats — both parties say no thanks#VAL2018 #SwedenElectionshttps://t.co/lAeUj6RyyR

Liberal Party leader Jan Bjorklund said he wanted to form a centre-right minority government and seek cooperation with the Social Democrats or the Greens.

He said the complicated situation meant he could not completely rule out supporting a Social Democrat-led government but said he would rather leave the Alliance than work with the Sweden Democrats.

“Should any party in the Alliance start cooperating with the Sweden Democrats then the Alliance will fall, but it will not happen,” he said in an interview for Swedish Television.

Many online surveys, which in the last election had gauged the Sweden Democrats’ vote better than conventional polls, had signalled they could dethrone the Social Democrats as the nation’s biggest party – a position the centre-left has held for a century.

In the end, the Sweden Democrats were beaten by Prime Minister Stefan Löfven’s Social Democrats by a 10 percentage point margin and eclipsed also by the Moderates of Ulf Kristersson, the Alliance’s candidate for the premiership.

“In some sense we’re happy the Sweden Democrats didn’t grow more than they did,” Liberal Party lawmaker Allan Widman told Reuters. “The bigger they become, the more hard pressed all other parties become.”

Sweden saw itself as a “humanitarian superpower” for years, but a rise in gang violence in immigrant-dominated, deprived city suburbs has also won support for the Sweden Democrats.

The costs of the wave of asylum seekers arriving in Sweden due to the refugee crisis will be much greater than previously expected, forcing the government to earmark more money in the coming years.

After the arrival of 163,000 asylum seekers in 2015 – the most in Europe in relation to the country’s population of 10 million – the government suspended many of its liberal asylum policies.

There was a sense of relief among supporters of mainstream parties about the far-right’s less dramatic gains. That was shared in Brussels. “It is clear that the claim that the far-right is on an inexorable roll and will devour everything that stands in its way is false,” said one EU official.

Sweden's "naive" approach to integrating asylum seekers has opened the door to the far-right, an outspoken lawmaker tells AFP ahead of key electionshttps://t.co/YJCCCD1l1x

Still, the Swedish election underscored a broader shift to the right in one of Europe’s most socially progressive nations.

Senior figures in the mainstream parties headed into meetings on Monday to produce a strategy for forming a government. But the process could take weeks and possibly fail.

Åkesson challenged Kristersson to choose between seeking support from the Sweden Democrats for an Alliance government or accepting four more years of Löfven as prime minister.

Kristersson called on Löfven to resign, but also rebuffed Åkesson. “We have been completely clear during the whole election. The Alliance will not govern or discuss how to form a government with the Sweden Democrats,” he said.

Both sides laid claim to being best placed to form a government, although votes from Swedes living abroad are not due to be declared until Wednesday and these could still sway the final outcome slightly.

Yet in the same breath, leaders of both sides called for bipartisan accommodation to avoid gridlock in parliament.

The scenario of a bipartisan coalition is highly uncertain.

Centre-left and centre-right parties have ruled together only a handful of times since the mid-1930s. Also, a 2014 accord to neutralise the Sweden Democrats and let the biggest bloc rule proved deeply unpopular among centre-right grassroot members and rapidly unravelled.

The Moderates – the biggest party in the Alliance – are not interested in cooperating with the Social Democrats and any such deal would also raise questions about democratic accountability. Voters might see the Sweden Democrats as the country’s only opposition party.

A new election will be called if parliament doesn’t agree on a prime minister after four attempts.

Sweden’s far right gains were driven by the issue of immigration and an increasing use of “junk news”, a new KANTAR SIFO poll, conducted over the weekend, has shown.

Junk news is defined by Oxford University as sources deliberately publishing misleading, deceptive or incorrect information purporting to be real news about politics, economics or culture – most with a right-wing focus on immigration and Islam.

The poll found that Sweden Democrat voters were more likely than the general public to have heard negative news stories about immigrants, and 95% of them said immigration played a major role in their voting decision. More than a third would have “preferred” to vote for a different party, had immigration not been an issue.

45% of Sweden Democrat voters say they have consumed news from the Sweden’s top three “junk news” websites on social media during the last year, which are publishing deliberately misleading information according to a report by Oxford University. This compares to 27% of the general public.

95% of Sweden Democrat voters said that immigration played a “very large” or “pretty big” role in their voting decision. 36% would have “preferred” to vote for a different party, had immigration not been an issue.

84% of Sweden Democrat voters reported hearing a lot of news about immigrants committing crimes or other bad acts. This compares to 72% of the general public.

“Sweden’s far-right took a page from Putin’s playbook by flooding voters with fake and manipulative news about immigration. But it didn’t work — predictions of huge gains for the far-right evaporated, and they only managed to come third. Like in the US, the far right is not rising, they’re lying.”