The Brief – Friends or foes? 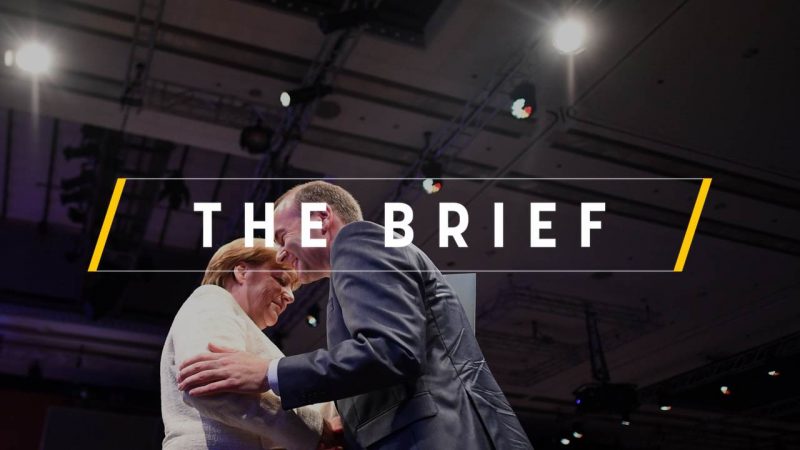 As the EU28 start horse-trading for the European Commission top job over dinner tonight, the two main negotiators find themselves in separate corners, both in weakened positions.

According to the EU treaties, EU leaders have the right to propose the candidate for the post of Commission president, after ‘taking account of the European elections’.

The crucial question of the evening will be whether they should kill the main election pledge; that only those who stood as top candidates of their political groups in the EU elections should be able to land the job.

EPP’s Manfred Weber has made his claim, having seen his group, as expected, emerge with the most seats. But that is all he can do, and it’s being widely reported that his hopes could be shattered tonight.

German Chancellor Angela Merkel is still bound by her promise to support Weber’s Spitzenkandidatur. But she has made no secret of her scepticism about the underlying idea for the process itself – fuelling doubts about her reliability as Weber’s backer.

Merkel repeated her support for Weber while touring with him during the final days of the European election campaign in Zagreb. But one could not help feeling it was still halfhearted – back at home, she stayed away from the whole EU election circus.

Ahead of the dinner, on the doorstep of the European Council building, Merkel once again said that she “naturally supports Weber” and that “the issue of Spitzenkandidaten is very important”.

But she emphasised twice that Weber is not her only concern. The priority, she said, is “the EU’s ability to act”.

An indicator that she may not be ready to take a bullet for him.

In any case, the German Chancellor arrives slightly weakened in Brussels. Her embattled ruling coalition was forced to hold ship after a thumping at the European polls that reignited questions over its survival.

Reports are now circulating that Merkel has reversed her plans to hand over the Chancellery to Annegret Kramp-Karrenbauer, her heir apparent, once she finally leaves.

So for her, tonight it is also about showing that her influence on the European stage has not waned.

But few have any doubt that, if the worst comes to the worst, Merkel will trade the Commission post for a German president at the helm of the European Central Bank.

In a telephone call on Monday, Macron told Merkel that the Spitzenkanditaten are legitimate and the selection of the new president must reflect the results of Sunday vote.

Macron has on many occasions denounced the Spitzenkandidaten procedure, instead talking up the likes of Michel Barnier and Christine Lagarde as great candidates for the job.

After election night, he went on a hunt for progressive allies, starting a flurry of phone calls and lunch appointments to lobby fellow leaders in a different direction.

One of the scenarios for tonight’s discussions could be that the two leaders reject each other’s candidates, opening up the way for a compromise candidate.

“Mercron” will meet for pre-dinner discussions. The question is whether they will still be friends afterwards.

The process of naming the next Commission president should respect the Spitzenkandidaten system, the leaders of the political groups in the European Parliament said in a joint statement. The Liberals disagreed.

As the European People’s Party and the Socialists will not able to form a majority in the European Parliament, Margrethe Vestager might emerge as ‘Queenmaker’ in this game of thrones.

Meanwhile, five members of the Juncker Commission have been elected as MEPs. What remains to be seen is whether they will take their seats in the European Parliament or stay on as Commissioners.

Chancellor Sebastian Kurz’s term has come to an end after the Austrian Parliament voted a no-confidence motion against the 32-year-old and his entire government. However, Kurz’s political career is not over.

On election Sunday, a hundred-meter queue stretches on Boulevard du Régent in Brussels where foreign embassies are located – the Romanian diaspora has emerged as force to be reckoned with.

A broad debate should be held on the possible regulation of political views expressed online, the leader of Germany’s ruling CDU Annegret Kramp-Karrenbauer said, facing an immediate backlash.

Formula One’s electric cousin came to Berlin’s defunct Tempelhof Airport, in the latest round of a rapidly advancing sport. Formula E’s fortunes have progressed hand-in-hand with those of electric vehicles in general.

Tonight’s EU leaders dinner on the EU top jobs. Watch our live blog here as we are on the ground and report on all the surprises and rumours of the night.