The Brief, powered by ADF International – The EU conclave 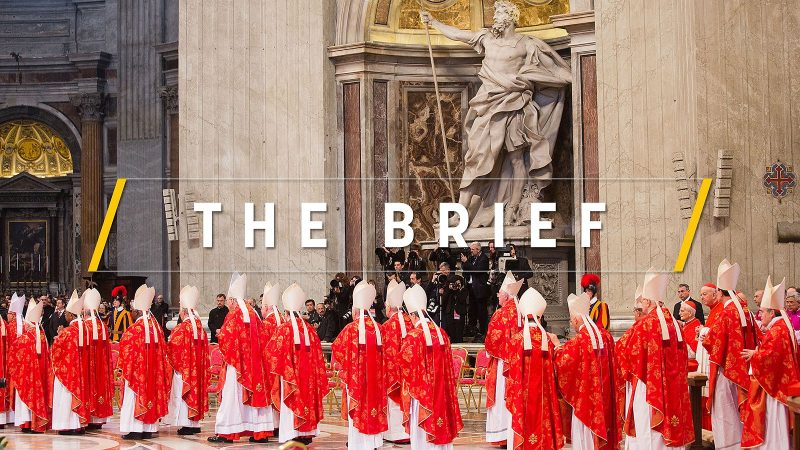 The decision-making for the top jobs in the European institutions bears some similarity to how Roman Catholic Cardinals elect the new Pope. There is a lot of unpredictability and a long wait for the outcome of a less than transparent process.

If everything goes well, we might see the wisps of white smoke in Brussels on Friday (21 June), at the end of a two-day EU summit where the four top EU jobs are expected to be decided, in principle.

The sequence should be the following. First, the Spitzenkandidaten system needs to be killed.

Yes, the EPP won the European elections as the biggest political family, but that was not a real victory. The EPP bled support, particularly in Western Europe, while other groups performed better than the last time. Anyway, Manfred Weber doesn’t enjoy broad support. Alright, Angela Merkel still supports him, but she will be flexible.

The real winner of the European elections is Emmanuel Macron.

We have already argued that this is a strange victory because he lost in France. But his group, Renew Europe, has become the kingmaker. Macron’s choice, undoubtedly, is Michel Barnier. Everybody except the UK likes Barnier, he was extremely good as the EU negotiator for Brexit.

So there we have the Commission chief. You can’t always get what you want, but Germany will get what it needs – the ECB top job.

Further down the road, the real battle will take place. There is a need for a political, gender and geographic balance, and there are several strong candidates.

Frans Timmermans, who has led a remarkable campaign on behalf of PES, is an excellent candidate for the EU foreign portfolio job, replacing Federica Mogherini.

It is widely assumed that he would be happy to get this portfolio and develop it further. It may look like a relatively smaller portfolio, but if its holder is really as good as Timmermans is assumed to be, this may turn out to be the biggest prize of the entire competition.

Moving on. Who will be the Council President? It’s always good to have a former EU prime minister or head of state, and it would be really nice to have a woman.

Lithuania’s Dalia Grybauskaite (EPP) and Denmark’s Helle Thorning Schmidt (PES) would fit the bill really well. Grybauskaite has the advantage of being from Eastern Europe. Some may argue that she is biased against Russia, but who knows, under the circumstances, this could also be her advantage.

What remains is the job of Parliament president, and the beauty of it is that it can be split in two. So that even Weber can get a consolation prize, and the Greens can have their share. Or  Guy Verhofstad could finally accomplish his dream of having a top EU job after such a remarkable service in the EU assembly.

So the EU conclave may not have such a difficult job after all.

Of course, everything is possible. In theory, even Angela Merkel could be asked to take the Commission’s top job. Or the Council. But we are not betting on that.

Freedom of religion is not only a fundamental right but is also essential for the development and preservation of an open, pluralistic, and inclusive society. There cannot be a well-functioning democracy without respect for religious freedom. And yet, this freedom is under pressure in Europe and beyond. Read more here.

Slower oil demand growth in 2019 is expected to lead to a glut of oil next year, which could have significant impacts on energy prices in Europe, according to a report released by the International Energy Agency (IEA) on Friday.

No MEP seat for Strache. Austria’s former Vice-Chancellor Heinz-Christian Strache announced on Monday (17 June) he will remain politically active in Vienna and won’t take up his MEP seat in Brussels

Will the EU honour its word to Tirana as well as Skopje or will Brussels – not for the first time – leave the West Balkans stewing in its own juice, writes Denis MacShane.

Madrid’s clean air zone could be axed by the city’s new mayor, despite the reported benefits. Jens Müller of the sustainable transport group Transport & Environment urges the new leadership to take a look at the hard facts.

“Systemic failings” marked by serious operational and transparency shortcomings, electoral security problems and a low turnout was the verdict of the EU’s election observers on Nigeria’s presidential, parliamentary and governorship elections in February, in a report released on Saturday.

Turkey will not back down from gas exploration in Cyprus even though southern European leaders urged Ankara to stop, Turkish President Recep Tayyip Erdoğan said on Sunday.

During an event organised by EURACTIV Foundation, a number of newly elected members of the European Parliament committed to joining forces in the upcoming five-year term in fighting disinformation.