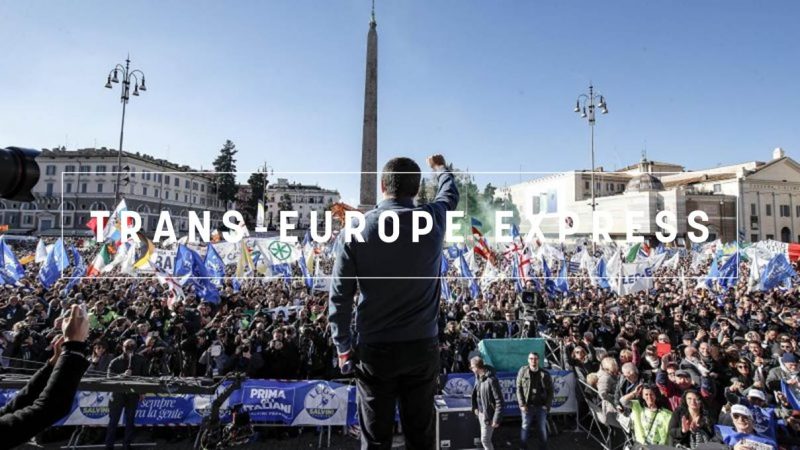 First official projections of seats in the new European Parliament have shown two right-wing ruling parties, Italy’s Lega and Poland’s PiS, as the second and third-biggest single party in the next Parliament, but the highly anticipated ‘Italo-Polish axis’ doesn’t seem to pan out.

Earlier this week (18 February), the European Parliament released the first survey on what the next European chamber could look like, based on a cross-section of national polls ahead of the European elections in May.

Updated projections will be presented to the public in the coming weeks, but at the current stage, the most significant starting point for analysis is that Matteo Salvini and Jarosław Kaczyński appear to be two top dogs ahead the election night.

Lega and PiS are expected to win 27 and 22 seats, respectively, becoming the second and the third-biggest party within the hemicycle. The first, as usual, will be Germany’s conservative CDU.

A pact between the two right-wing parties is looking more and more lucrative for both and initial contact was already made by Salvini himself, who flew to Warsaw in January to meet Kaczyński, who essentially leads PiS from the background, without being its formal chairman, and test the waters for a possible Eurosceptic alliance.

During the visit, Salvini hailed a new ‘Italo-Polish axis’ to replace the dominant French-German one, sparking a “European spring”.

At the time, this looked like the beginning of a political earthquake but, as it turns out, the Warsaw talks seemed more like a one-time thing.

There was no follow up in the weeks after and the settlement of an Italo-Polish axis now seems to be dead in the water, or at least postponed for after the elections.

There’s a red flag that shows that the parties have come to a standstill. In Poland, Salvini was asked if he was thinking about running for the European elections together with his current government’s ally in Italy, the anti-establishment Five Star Movement.

He said that there was no need to run together with them and some observers noted that it was because, with Kaczyński, Salvini wouldn’t need Di Maio.

But according to the Italian press, this week Lega proposed Five Star Movement to join them, even in a political group within the European Parliament, but got nyiet as an answer.

If Lega is considering getting someone else on board, distances with the European conservatives on certain topics – above all Russia –  are turning out to be unbridgeable.

At the current stage, conservatives need Salvini to replace the Tories, rather than the other way around, as good performance is expected also for Le Pen’s Rassemblement National.

Labour headaches. Germany is dependent on migrant workers but a decreasing number of them in the future will be EU citizens.

Run off. The Bulgarian PM is destabilised by scandals and revelations about a hidden political alliance.

Brexit uncertainty. Britain and the EU have played down the chances of clinching an immediate divorce deal, even though the clock is ticking.

French fears. An employers’ federation has said that French businesses are not prepared for a no-deal Brexit, the agricultural sector is waiting, while transporters are panicking.

Tailor-made. Polish energy companies are set to pool their resources and build an electric vehicles factory.

Tightening ties. Athens and Skopje have signed an agreement to gradually decrease roaming charges and remove them completely by 2021.

Under investigation. Estonia and Denmark are being scrutinised over Danske scandal for having failed to enforce EU rules to prevent one of the largest-ever money-laundering scandals.