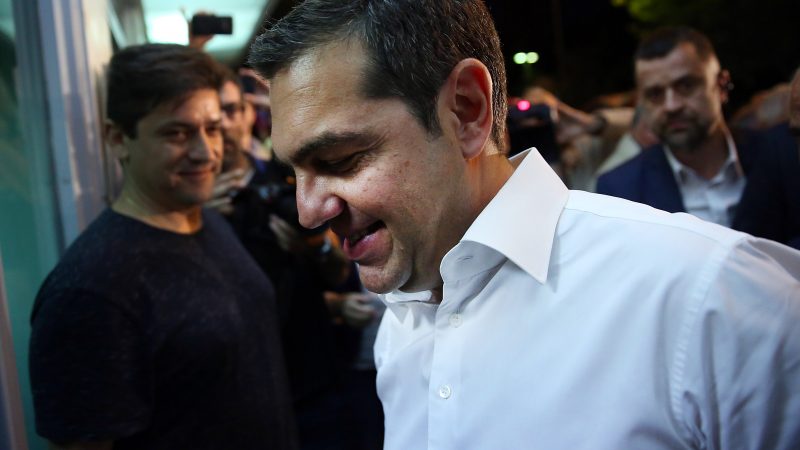 Tsipras: "Greek people will now decide if they want us to continue our plan to support the many or just return to the darkness of austerity." [EPA/ORESTIS PANAGIOTOU]

Greek Prime Minister Alexis Tsipras announced snap elections, most probably due on 30 June, following massive defeats by the conservative opposition in EU and local elections held on Sunday (26 May).

“I ask from Greek people their clear mandate. The result of the EU elections gives the opposition the right to question the exit from the bailout. I’m not going to escape,” the leftist prime minister said.

Tsipras recently announced the first relief measures following eight years of austerity-driven bailouts, but it seems they did not bring about the desired electoral results.

“Greek people will now decide if they want us to continue our plan to support the many or just return to the darkness of austerity,” Tsipras said.

“The prime minister must assume his responsibilities. For the good of the country, he must resign and call snap elections as soon as possible. This is the only clear solution,” said New Democracy leader Kyriakos Mitsotakis.

Socialist Movement of Change-Pasok (S&D) got 7% of the vote, followed by the Communist Party 5.7%, the far-right Golden Dawn (4.8%), newly established right-wing Greek Solution (4%) and Varoufakis’s DIEM25 with 3.1%.

In addition to the EU elections’ disaster, the regional and local elections that took place simultaneously dealt another blow to the ruling party.

Analysts have suggested that the name change deal with North Macedonia, the so-called Prespa Agreement reached last year, has cost Tsipras dearly, considering that all regions of northern Greece voted against Syriza and in favour of New Democracy candidates.

New Democracy has fiercely opposed the Prespa Agreement since the very beginning of the negotiations between the two countries.

Tsipras has tried to forge a progressive alliance in the country, putting much pressure on the socialist Movement of Change (Pasok), which refuses to collaborate.

Analysts suggest that Greek socialists are much closer to New Democracy despite the opposite opinion of their EU socialist family.