EU antitrust Commissioner Margrethe Vestager is the clear favourite to succeed Jean-Claude Juncker as the next president of the European Commission, according to the results of a Europe-wide online survey unveiled today (19 February).

The survey by public affairs firm Burson Cohn & Wolfe (BCW), prepared in collaboration with EURACTIV, invited respondents to give their verdict on the performance of each individual Commissioner, ranking them from 0 to 10.

With an approval rating of 50.2%, Vestager was the only Commissioner on Jean-Claude Juncker’s team of 28 to achieve a score above 50%. The Danish came just ahead of EU foreign affairs chief Federica Mogherini (49.6%), Commission First Vice-President Frans Timmermans (46.9%), and EU trade Commissioner Cecilia Malmström (44.7%).

Juncker himself came fifth, with a score of 44.4%. At the bottom of the scale is Tibor Navrascics, the EU’s education Commissioner from Hungary, who was credited with an approval rating of only 19%, just behind Croatia’s Neven Mimica, the EU’s development aid Commissioner, with 20.6%.

When he started his mandate in 2014, Juncker presented his new team as the “last chance Commission,” and urged the European Parliament to support him in bringing the EU closer to its citizens.

Almost five years on, respondents to the BCM survey painted a mixed picture of Juncker’s performance.

The Juncker Commission as a whole received an average score of 46%, a performance BCM sees as “rather disappointing” although broadly in line with surveys carried out during previous Commission mandates.

Still, most respondents (41%) believe the current Commission is “better” than its predecessor, led by former Portuguese Prime Minister José Manuel Barroso. Only 34% said the Juncker Commission fared “worse” than Barroso and 26% said it performed “the same”.

According to BCM, it is “no surprise” that Vestager came on top of the scoreboard.

“Many see [Vestager] as the brightest star of the Juncker Commission,” Burson pointed out in comments accompanying the survey, saying the Dane comes across as “smart, tough, articulate and empathetic”.

“She notably interpreted tax avoidance as part of her remit, saying it undermined free and fair markets,” Burson remarked. During her mandate, Vestager indeed led a highly publicised crack-down on corporate tax avoidance, targeting giants such as Fiat, Starbucks, Amazon and McDonalds.

Tech giants also came in the firing line of the EU’s antitrust chief. The dreaded Dane fined Google a record €4.3 billion for tying its flagship search engine to its Android mobile operating system. And she ordered the Irish government to reclaim a record €13 billion from Apple in unpaid taxes. 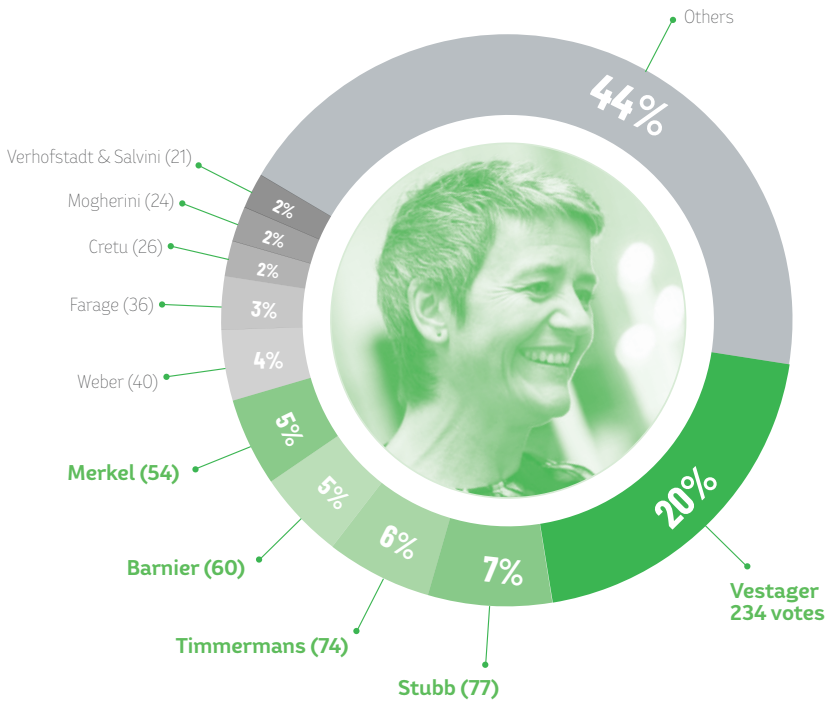 EU antitrust Commissioner Margrethe Vestager is the clear favourite to succeed Jean-Claude Juncker as the next President of the European Commission, according to the survey. [Burson Cohn & Wolfe (BCW)]

Meanwhile, some major achievements of the Juncker Commission went rather unrecognised.

Estonia’s Andrus Ansip, the Commission vice-president for the digital single market, got an approval rating of just 26.1%, despite leading a sweeping overhaul of Europe’s digital landscape with his digital market strategy, unveiled in 2015.

The former Estonian prime minister, who is running as an MEP in May, also spearheaded the General Data Protection Regulation (GDPR), which became a hallmark of the European Union, known in Silicon Valley, as well as a reform of online copyright laws, which puts the consumer at the centre.

Similarly, the EU’s energy and climate action Commissioner, Miguel Arias Cañete, only received a score of 27.6%, despite seeing through a massive package of clean energy laws, which included new ambitious targets on renewables and energy efficiency.

At the end of the day, Juncker only finds comfort in his handling of Brexit and the nomination of Frenchman Michel Barnier as chief negotiator for the EU side.

“This was not a role the EU wanted to create, but they struck gold with Michel Barnier,” Burson said. The former French foreign minister and EU Commissioner was acclaimed for handling the complex Brexit talks and earned praise for keeping Europe united at a time when it needed it most.

“He held the line with gravitas and grandeur,” Burson says, adding that “his experience put him light years ahead of his British counterparts” during the negotiations.

However, that was insufficient to earn Barnier a top spot in the ranking to become the next Commission president after the May European election.

With 20% of votes, Vestager was the clear favourite to become the chief of the EU executive, followed by Finland’s former Prime Minister Alexander Stubb (7%), Timmermans (6%) and Barnier (5%).

Manfred Weber, the lead candidate of the European People’s Party (EPP), is credited with a miserable 4% approval rating.

Other (unlikely) candidates mentioned by respondents include German Chancellor Angela Merkel (5%) and anti-EU torchbearer Nigel Farage (3%), suggesting survey results there are probably to be taken with a grain of salt.

Turning to the priorities of the next Commission, most respondents (38%) cited environment and climate change as the most important policy priority for the next EU executive.

Making the EU more democratic comes next (28%), followed by migration, and the economy (24% each). Defence and security policy is seen as a priority by only 18% of respondents, even though it made strides over the past years and is expected to continue climbing up the EU agenda.

Another clear indication emerged from the survey: a majority of respondents (54%) called for an equal gender balance in the next Commission and more ethnic diversity (49%). Of the current 28 Commissioners, only nine are women (32%) and none are non-white.