Andrea Nahles’ resignation has plunged the German Social Democrats (SPD) into chaos. With state elections coming up, the party needs to find successors – but there are not many people to choose from. EURACTIV’s media partner Der Tagesspiegel reports.

No party in Germany has seen as many party leaders resign as the Social Democrats (SPD).

Since Gerhard Schröder’s resignation from the party in autumn 2002, the SPD has had six different party leaders, with Franz Müntefering even assuming the role twice. Andrea Nahles is now the seventh.

How quickly can party members end this party leadership vacuum?

The next party conference, which normally takes place in December, could be brought forward to September, according to the SPD.

Until then, the SPD needs someone to take over the leadership of the party. However, there are not many that will fill that role.

It appears unlikely that SPD vice-president Olaf Scholz will become the party’s provisional leader. The vice-chancellor has many opponents in the party, not only because he campaigned for the party’s return to the grand coalition, but also because critics accuse him of being too soft in the alliance with the Union of CDU and CSU.

Many see the Minister President of Rhineland-Pfalz, Malu Dreyer, as a good replacement for SPD’s first female leader. But the party is also mindful of Dreyer’s health issues.

As an alternative, Mecklenburg-Vorpommern’s Prime Minister Manuela Schwesig could be considered as acting chair. First decisions on the issue are expected to be taken by the party’s board on Monday.

How is the party base involved in the SPD’s decision on Nahles’ replacement?

Many are now calling for a primary election of the next party chairman to be organised by the members.

But there is not much time left, especially with the summer holidays coming up and numerous regional conferences being necessary – as is the case regarding Angela Merkel’s successor.

In addition, the next difficult state elections in Brandenburg and Saxony are scheduled for 1 September. On Sunday, Brandenburg’s head of government, Dietmar Woidke, warned against a protracted stalemate.

Who could inherit the party leader position in the longer term?

In addition to Mecklenburg-Vorpommern’s Prime Minister Manuela Schwesig, a recurring name is that of Stephan Weil.

Niedersachsen’s prime minister has proven that he is capable of winning elections but so far, he has opposed the idea of taking on the party leadership. However, the pressure on Weil is likely to increase in view of the SPD’s existential threat.

There is also talk of two party leaders being a solution. Demands are high, especially as it remains unclear what the tasks for the new party leader will be.

At the core, the issue is whether the SPD will remain in the grand coalition.

The SPD party leader will have to continue the balancing act between sharpening his or her own profile and pursuing reliable governance. Nahles just failed to achieve this.

The party is looking for a conciliator and a bridge builder, someone capable of bringing under control the more left-leaning members of the party, led by Juso-leader Kevin Kühnert.

Who will be the new party leader?

The early election planned for Tuesday (4 June) by Nahles, which was supposed to clarify the leadership question, will likely be postponed to gain time.

So far, there is no candidate who would succeed her – and coming out from under cover at such a time could actually lead to new conflicts.

The distinguished foreign policy expert Rolf Mützenich would provisionally be the acting chair.

Achim Post, the head of the North Rhine-Westphalian parliament, and Matthias Miersch, spokesman for the parliamentary left and environmental politician, will be considered as permanent successors.

Since Nahles’ resignation, what is the state of the SPD?

Shocked and scared – that is how one could describe the mood among members of the SPD on Sunday (2 June).

The open-ended power struggle, the personal criticism of the party leader, it has left a mark. The violations are likely to cause the party, whose basic values include solidarity, a lot of trouble for a long time to come. There is talk of “shameful” behaviour and contempt of women.

“The way in which some have dealt with Andrea Nahles after the loss in the European elections has been unacceptable,” said SPD vice-president Thorsten Schäfer-Gümbel. Michael Roth, Minister of State in the Foreign Office, also spoke sharply of some of his colleagues, saying they “should be ashamed.”

Others remind us of Nahles’ achievements, of the process of renewal she initiated. Nahles had also organised debate camps and presented a welfare state concept aimed at fixing the consequences of the social welfare system Hartz IV.

She also tried to restore the Willy-Brandt-House, the SPD’s headquarters, to its former glory. Neither Nahles nor her party were able to reap the benefits of her actions, however.

In the European elections, SPD representatives lost massively among voters under-30 as only 9% of the voters from this age group voted for the SPD.

Maybe something was missing, such as an innovative solution to the issue of how social democracy can ensure security in times where employees are facing a digital revolution and having to make the transition to e-mobility.

How long will the grand coalition last?

Even Vice-Chancellor Scholz promised his party that this will truly be the last grand coalition (the Groko) in Germany. The probability that the alliance will hold until the German elections in 2021, has dropped sharply.

The SPD’s party conference that will decide on Nahle’s successor could also be key in determining the grand coalition’s survival – particularly if by then they cannot agree on a basic pension or on an ambitious climate protection law.

There are also state elections in Brandenburg and Saxon at the start of September, where the SPD is likely to face new severe losses.

According to a new Forsa poll, the SPD will only reach 12% in the national elections, following a historically poor EU election result of 15.8% of the votes.

This is also the case for the Union between the CDU and the CSU, where centrifugal forces are becoming stronger. Even if the CDU and CSU declared a continuing commitment to their union on Sunday, the new CDU leader Annegret Kramp-Karrenbauer could try and make a clean break.

What does this mean for the Greens?

The Greens would have no problem with new elections: they have been stable as they have been polling at 20% for a while now. And with party leaders Annalena Baerbock and Robert Habeck there would also be a top duo ready to start an election campaign immediately.

But the two chairmen are careful not to rashly use the word “no”. After all, in recent months, the Greens have carefully cultivated the image of the (last) reasonable force in the party spectrum: No unilateral decisions and no annoying internal party disputes. Instead, they have shown the willingness to make compromises and assume government responsibility – even in constellations that are uncomfortable for the party.

It is also clear, however, that the Greens will campaign for a new political start if the grand coalition breaks up. CDU leader Kramp-Karrenbauer’s offer for talks would certainly not be turned down by the party leadership.

But two years after the last Bundestag election, it would not be possible to arrange a new edition of the ‘Jamaica’ talks with the CDU/CSU (black) and the FDP (yellow) – especially if this were associated with a change in the Chancellor’s office. In such a situation, the voters would have to be questioned again, according to the party’s leadership.

And even if the Greens profit from the permanent crisis that affects the SPD, many in the party are also worried – not only because a joint coalition with the SPD at the federal level seems to be retreating in the distance.

Some also feel queasy at the thought that the Greens could indeed become the leading force of the centre-left, as party leader Habeck has repeatedly demanded. But such a claim goes hand in hand with far more responsibility. 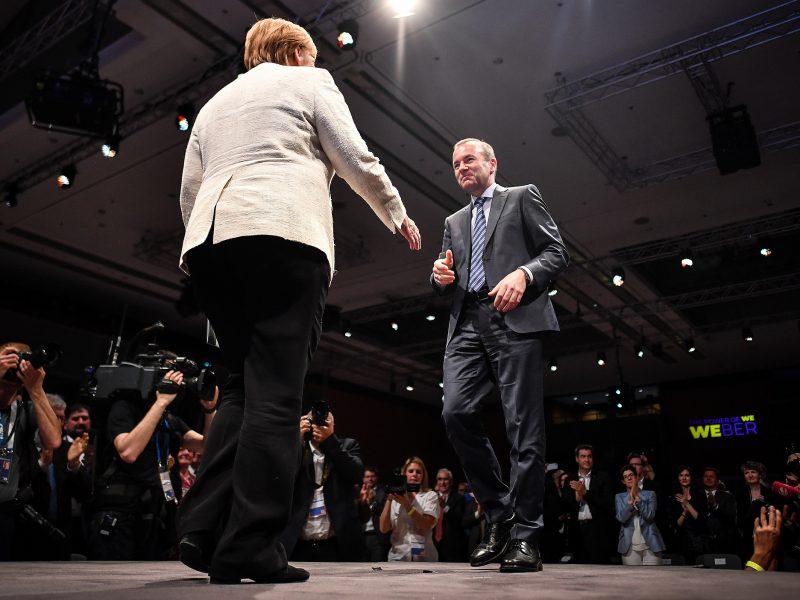 German Chancellor Angela Merkel's embattled coalition will hold crisis talks Monday (27 May) after a thumping at European polls that has reignited questions over its survival.