Von der Leyen’s nomination is a betrayal of democracy 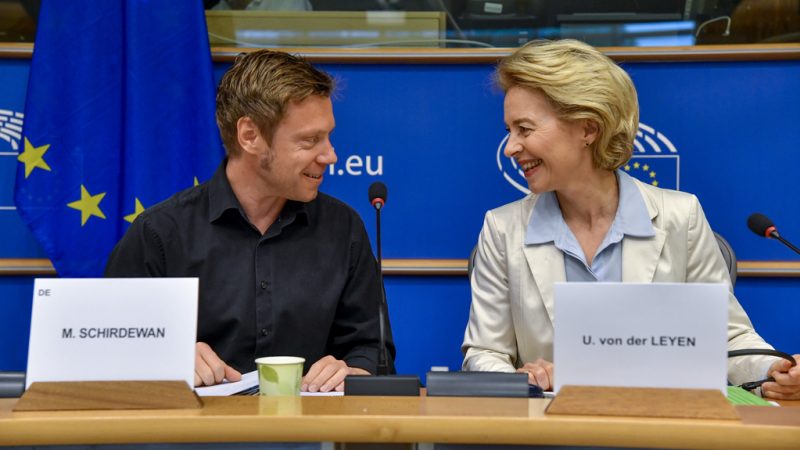 Ursula von der Leyen may be a relatively unknown name in Europe but we Germans are familiar with her work, most recently as the country’s Defence Minister, writes Martin Schirdewan.

Martin Schirdewan is a German MEP for DIE LINKE and acting president of the Confederal Group of the European United Left/Nordic Green Left (GUE-NGL) in the European Parliament.

For an EU that claims to be working to improve transparency and accountability and hoping to reclaim its damaged reputation from populist and far-right forces, it is worrying that not enough questions are being asked about von der Leyen and her track record.

In the incredibly short period between her nomination by the Council and the confirmation vote at the European Parliament, the focus has been on political horse-trading and backroom deals. Rather than promoting an open debate about the policy issues that matter to European citizens, von der Leyen has been trying to “get the numbers” to scrape through the vote.

This is why my group, the Left in the European Parliament, has sought to refocus the debate on concrete policy questions. Europeans deserve to know the political programme of the next Commission president and whether this reflects their rights and aspirations.

Our 10 key demands for EU top-job holders set out concrete measures for a truly progressive and inclusive social Europe for all citizens that can also be a positive force in the international arena.

We want radical action for a carbon-neutral EU with 100% renewable energy rather than ineffective market-based solutions like carbon trading.

The EU must end austerity policies and the kind of cuts to community social funds that have pushed millions of people into poverty. We need a Commission that strengthens the welfare state through a Social Investment Plan, Integrated anti-Poverty Strategy and a comprehensive Social Protection Programme.

We are witnessing a race to the bottom for workers’ rights. Workers deserve real salary valuations, regulation of the so-called gig-economy and equal pay. A Social Protocol to the EU Treaties can guarantee that fundamental social rights take precedence over economic freedoms.

The 2008 financial crisis is not an issue of the past. Millions of Europeans continue to suffer and struggle to make ends meet. The structural issues that led to the crisis still prevail and a new crash lurks around the corner. The Commission must show it has learnt from its mistakes and start building a robust, diverse and regulated banking sector. This means an end to the Capital Markets Union project.

With President Trump’s attempts to redefine international trade rules and drag the EU with it, we must trace an alternative path by emphasising that new trade agreements must respect UN Sustainable Development Goals, the Paris Climate Agreement and ILO conventions. This would exclude free trade agreements the EU has aggressively been promoting, and the recently finalised EU-Mercosur agreement.

There is no cause for optimism that von der Leyen will tackle these issues with a different approach from her predecessors. In fact, she avoiding giving clear answers or commitments on any of these policy proposals when questioned by our MEPs.

Germany’s Ministry of Defence is also currently subject of a probe over suspected corruption. My party succeeded in establishing an investigation committee in the German Parliament on the allocation of lucrative contracts to external consultants worth millions of euros. Von der Leyen has already admitted mistakes last year yet investigations continue, including on allegations of nepotism following the hiring of one of the consultants as her deputy overseeing the ministry’s arms procurement section.

EU militarisation, with billions allocated for arms companies at the expense of our public services, perpetuates conflict and division around the world. Von der Leyen’s profile fits this militaristic project well as a darling of repressive regimes like Saudi Arabia, facilitating training for Saudi military committing war crimes in Yemen, and as someone who has defended a massive increase in German military spending.

In the run-up to the European elections, there was intense talk about an existential crisis in the EU. Politicians promised efforts to reverse that trend if elected. The shady deals around Ursula von der Leyen have shown that the EU is hell-bent on deepening its democratic deficit and pushing citizens farther away from its decision-making.

The Left in the European Parliament, as the only group refusing to be part of the so-called Grand Coalition talks and insisting on full transparency, will continue to be the voice for workers, the environment, feminism, peace & human rights – rejecting von der Leyen is key to this.