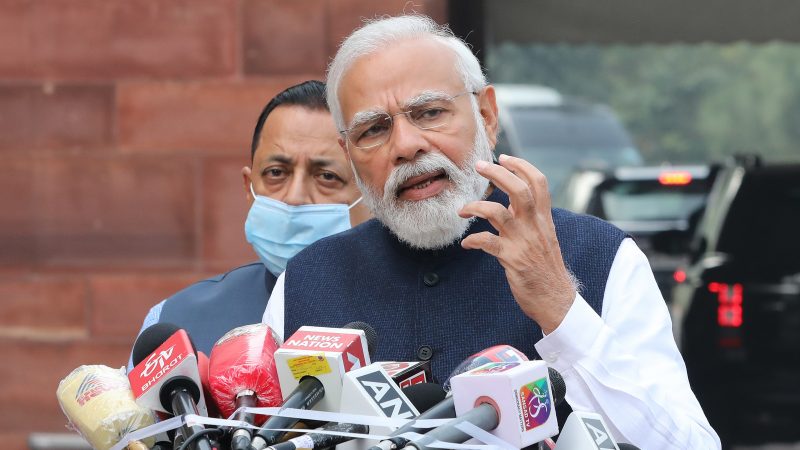 Indian prime minister Narendra Modi speaks to members of the media at the beginning of the winter session of the Indian Parliament in New Delhi, India, 29 November 2021. [EPA-EFE/HARISH TYAGI]

With its G20 Presidency starting on 1 December 2022, India hopes to play a pivotal role in what it sees as a “Decade of Action”, in view of the 2030 Agenda for Sustainable Development, writes Gauri Khandekar.

For the first time, India will assume the presidency of the G20 from 1 December 2022 to 30 November 2023. The twice-postponed presidency, which was eventually to be held this year to coincide with the country’s 75th year of independence, will now conclude with a G20 summit in India in 2023 – the first meet of the global grouping in India.

India takes the baton from Indonesia, whose presidency’s theme was ‘Recover Together, Recover Stronger’, emphasising the need to build robust partnerships and collaborations for a strong and inclusive post-pandemic recovery process and better global resilience.

As the pandemic endures, India will likely maintain Indonesia’s overall theme. India can also be expected to retain other agenda items from this year like health, digital transformation, and energy transition.

Over the years, India’s priorities at the G20 have mostly included anti-money laundering, counter-terrorist financing, cutting remittances cost, market access for key drugs, reforms of vital global institutions like the World Trade Organisation (WTO), and the “full implementation” of the Paris Climate Agreement.

During its presidency, India can be expected to shape the agenda around an inclusive and equitable post-pandemic recovery. According to the World Bank, global growth is estimated to decelerate significantly from 5.5 per cent in 2021 to 4.1 per cent in 2022 and 3.2 per cent in 2023 as backlogged demand dissipates and fiscal and monetary support are phased out across the world.

The impact on global value chains (GVCs) since the outbreak of the COVID-19 crisis has led to changes that are likely to become longer-lasting, or indeed permanent, as nations seek to restructure their most sensitive sectors, which have been brought under the spotlight. For the international economy to bounce back, it will be essential to reconstruct more resilient, climate-friendly GVCs while forestalling protectionism.

Along with South Africa, India solicited the WTO in October 2020 to temporarily suspend intellectual property (IP) rules related to COVID-19 vaccines and treatments, including patents, industrial designs, copyright and protection of undisclosed information. The IP waiver would have allowed drug makers worldwide to mass-produce COVID 19 vaccines inexpensively for timely and affordable access. Some 15 months later, the request continues to languish under negotiations.

India will presumably urge G20 member nations to address the gaps in global pandemic preparedness, address structural bottlenecks to reduce the pandemic’s scarring effects, and ensure expeditious and equitable distribution of COVID-19 vaccines to aid global recovery. At the G20 Summit in Rome in 2021, Indian Prime Minister Narendra Modi even pledged to produce over 5 billion Covid vaccine doses by the end of 2022 condition to swift approval from the World Health Organisation (WHO).

Other priorities that India may take upon including sustainable development, livelihood and future of work, access to resources through open trade, and good governance.

India hopes to play a pivotal role in what it sees as a “Decade of Action” in view of the 2030 Agenda for Sustainable Development. India, home to around one-sixth of the world’s total population, will be a crucial part of the success of the UN’s 2030 Agenda. Despite progress, both individually and collectively, through the platform, no one G20 member is on track to achieve the SDG targets.

In 2021, India committed to achieving net-zero emissions by 2070, joining several fellow G20 countries’ 2050/2060 pledges. For India, it is essential that developed countries do more to achieve net-zero carbon emissions and provide low-cost finance and technologies to developing nations for the climate transition.

India’s G20 Sherpa Piyush Goyal stated in November last year that “… developed countries, which have already enjoyed the fruits of low-cost energy for several years, will have to go in for net-zero much faster and possibly even go in for net negative so that they can release policy space and some carbon space for the developing countries to pursue their development agenda”. As chair of the G20, India will discernibly push for the provision of finance and technology as critical enablers for achieving the climate goals set by the Paris Accord.

Sustainable lifestyles, a personal mantra promoted by PM Modi, and reflected in the G20 declaration on sustainable consumption and responsible production patterns, should also see emphasis.

Livelihood and the future of work are also anticipated to figure on India’s agenda for its G20 presidency. With regards to global food security, given increasing climate extremes and being a country in which half the population is employed in the agriculture sector, India will be keen to focus on the livelihoods of small, marginal farmers.

Likewise, given that two-thirds of all developing country youth are either unemployed or trapped in low-quality jobs, a significant challenge for the G20 will be to ensure better education and training mechanisms, skills development, and employment opportunities. More than half of India’s own population is under 25 years. The G20 will be an influential forum for collective action in this area.

On the international finance track, India could push for the further development of the ‘Common Framework for debt treatment beyond the DSSI’, an initiative endorsed by the G20, together with the Paris Club to support low-income in a structural manner countries with unsustainable debt. India could also spearhead recycling of the Special Drawing Rights (SDR) US $650 billion issued by the International Monetary Fund (IMF) in 2021 towards low-income nations in most need of economic recovery given its skewed allocations towards developed countries who needed it the least – the US, EU and the UK received about half the funds, while low-income countries touched only about USD 21 billion worth of liquidity.

India may also consider ensuring that the agreement on global tax brokered by the G20 in July 2021 on profit reallocation and global minimum tax is legislated and implemented. India has also advocated the formation of a mechanism that denies entry and safe havens to fugitive economic offenders.

Finally, given the recent outbreak of war between Russia and Ukraine and the subsequent widespread economic and other sanctions issued against Russia by a number of countries, the rest of the Indonesian presidency and that of India are highly likely to be fraught with heightened political tension. Given India’s historical close ties with Russia and its strategic partnership with the European Union (EU), the US and a number of European countries, it may come to India to help assuage frictions.