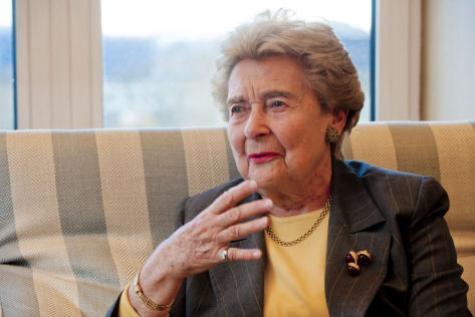 EXCLUSIVE/ Paul-Henri Spaak, one of the European Union’s founding fathers, was tormented by the unanimity rule, which still holds the EU hostage, his daughter Antoinette revealed. “We need a two-tier Europe,” she told EURACTIV.

You are the daughter of one of the founding fathers of the European Union. Do you see the sort of leadership and European vision today that pushed your father to act?

I think the atmosphere today is very much focused on social difficulties, unemployment, tax. Politicians get caught up in these problems that have to be solved in the short term. They don’t find ways to relate them to a European construction with a European vision. It’s difficult.

I think the current climate is not conducive to the emergence of great European leaders. They are all too tied up in their own urgent problems. They should be able to show that a strong Europe would be beneficial to the population, but they never really manage to enter into this discourse.

Yes, but isn’t there at least one true European leader?

I think Europe is lacking leaders. I notice that once they are relieved of the burden of resolving national problems, politicians become confident European leaders. Guy Verhofstadt is a good example. Guy Verhofstadt was prime minister of Belgium. He left national politics, entered the European Parliament and has become one of the great personalities of the institution.

It is difficult to do both. This problem didn’t exist at the time of the founders, who built the Union. Today there is economic war, but it doesn’t leave millions dead. After the war the leaders had a real obligation to do something. We are no longer in this situation.

Cohn-Bendit was a great loss to the European Parliament. He was absolutely independent and had a wonderful European vision. He was the only one.

What do you think of Mrs Merkel? Is she a unifying or a destructive power for Europe?

I have been very impressed by Mrs Merkel. She comes from East Germany, and when she became Chancellor, she said that this helped her to understand the fundamental importance of Europe for Germany and for Germany politics.

She does her best to prioritise the EU, whilst taking into account the domestic politics of her country. I think she is much braver than many other European leaders.

Is she the only one?

I see no others like her. You know, when we talk about someone like Didier Reynders – he is obviously a committed European, he is part of the eurozone, he has a good understanding of Europe – I am sorry he was not made European Commissioner. He would have brought youth and determination to the role.

Individually, they are all committed Europeans. But during the European elections, when I told them to talk about Europe in their campaigns, they said “Yes, yes, I will do it,” and I heard nothing. There is a kind of urgency surrounding the problems that excite public opinion, but the public only become interested in things when we talk about them. If we don’t talk about them, what do we expect? So it is a good question. Apart from Merkel…

Do you believe we need to talk to young people about more than just peace in order to unite them?

Oh we must talk about peace! It is not something to take for granted, it can disappear. Look at the terrible war in Yugoslavia. People were killing each other and Europe could do nothing. It was the Americans that intervened. We have to talk about peace, because it is not irreversible.

But it’s true that they relate to it less. Today we have to tell them what kind of world we would be living in without Europe. We must make them understand that Europe is in their hands and teach them European values.

At times like these, in an era of globalisation, Europe should have greater powers to preserve this way of life, where people are relatively protected. That is today’s Europe: peace, values, democracy and happiness.

What would Paul-Henri Spaak say if he made a political come-back today? What would he get upset about?

He could not get around the issue of unanimity. Europe is still shackled by unanimity on the question of immigration. The northern countries are stalling because they are not interested. They see it as an Italian problem. They have a certain amount of pity, certainly, but Europe is not doing what it should. It’s a good example of the smooth running of the institutions. A government only works when its approach is based on values and the interest of the people, but it’s difficult.

Would he be in favour of a two-tier Europe?

Yes, I think so. We need a two-tier Europe. We cannot be held to ransom by one country out of the 28 that rejects the solutions that are best for Europe as a whole. The majority should be able to over-rule the minority in the interests of good governance.

We will never solve unemployment in Belgium if the problem continues to exist in the rest of Europe. We have to work together.

The failure of the European Defence Community has been a catastrophe. If that had succeeded, we would today have an independent European army.

0 responses to “Spaak: My father was tormented by the unanimity rule”