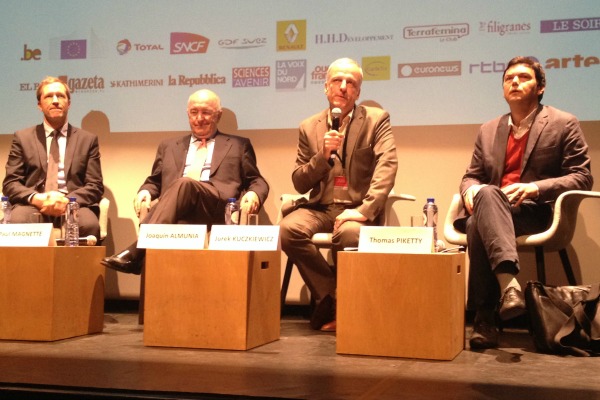 National politicians have left Brussels technocrats with the unenviable task of explaining austerity decisions taken at European level to their public opinion, undermining trust in the EU’s political system and democracy at large, according to Joaquín Almunia, the EU’s competition commissioner.

Almunia, a Spanish socialist who oversees competition policy at the European Commission, rued the national politicians who take decisions in Brussels only to decry them when they come home the next day.

“Those who take the most important political decisions in Europe in these years of crisis are not there when you need to tell people why they made ??those decisions […] and who is responsible,” he told a two-day conference on ‘Re-inventing Europe’, staged by French Magazine Le Nouvel Observateur at the Brussels Bozar museum last Friday (11 October).

National politicians make decisions in Brussels only to “leave technocrats the day after to do the explanation work and deal with public opinion,” Almunia told a panel debate at the conference, titled: ‘Has liberalism killed Europe’?

Answering the panel’s question, Almunia said the danger faced by Europe was not excessive free-trade or economic liberalism but “the lack of accountability of political leaders”.

Getting rid of the unanimity rule

Europe’s unaccountability problem is not new and has fascinated many political scientists who have discussed ad nauseum the EU’s so-called “democratic deficit”. But the eurozone debt crisis, and the tough austerity measures that were imposed on some countries in exchange for EU bailout money, have made the problem more acute than ever.

Seeking to address the root cause of the debt crisis, EU leaders have adopted a new treaty on fiscal policy coordination, forcing eurozone countries to introduce a German-style “debt brake” on their constitutions, and giving the European Commission more powers to sanction countries that break agreed deficit limits.

But these short-term measures, adopted in crisis conditions, haven’t turned the EU into a federal–style system that would make it more politically accountable, said the speakers at the Bozar debate.

Thomas Piketty, a French economist, said the new fiscal treaty had reinforced the EU’s “technocratic federalism” but failed to improve the bloc’s broader institutional setting, which he said had become “dysfunctional” because of the unanimity rule.

The fundamental problem, Piketty said, was that the European Council of heads of states does not act like a true second chamber in relation to the European Parliament, which represents the peoples of the EU, because it still decides by unanimous votes in key areas such as taxation.

When national politicians come to Brussels to make decisions in the Council, it is difficult for them to be placed in a minority without losing face in front of their public opinion at home, Piketty observed. To overcome this, he suggested that countries be represented by more than one person in order to make room for compromise and avoid the embarrassment for a national minister or head of state, of being overruled.

Paul Magnette, a Belgian socialist who started his career teaching political science at Brussels University, said such ideas had been tried before and failed, citing the Parliamentary Assembly of the European Coal and Steel Community (ECSC), set up in the 1950s.

"If you want to be federalist, you have to be consistent. You must remove the unanimity rule, have a strong European Parliament and a European Commission which is accountable before the European Parliament and where a socialist commissioner can express his view – for example that banking union is going too slowly or that a minimum wage is required.”

However, in the absence of a consensus among the 28 EU countries to reform the treaties and adopt a federal structure, Magnette said that immediate steps could be taken to avoid giving the impression that the Commission is dictating economic reforms to the member states.

According to the Belgian politician, the EU’s economic affairs commissioner, Olli Rehn, “has a legitimacy problem” when he gives recommendations to EU countries on sensitive issues like pension reform.  In his view, the EU recommendations are too detailed and “do not leave enough room for debate or compromise,” making them sound like the “tables of Moise” where the Ten Commandments are written.

“When the Commission imposes what I believe is blind austerity, we should also retain the right to say 'we do not agree' and begin a critical dialogue with this authority. In a democracy, I think that is essential.”

After the financial and sovereign debt crisis, state bailouts and austerity cuts, the May 2014 European elections will take the pulse of public confidence towards the European Union.

Economic and social issues are expected to take centre stage in national political campaigns, with voters in many countries strongly rejecting the austerity policies adopted in response to the crisis.