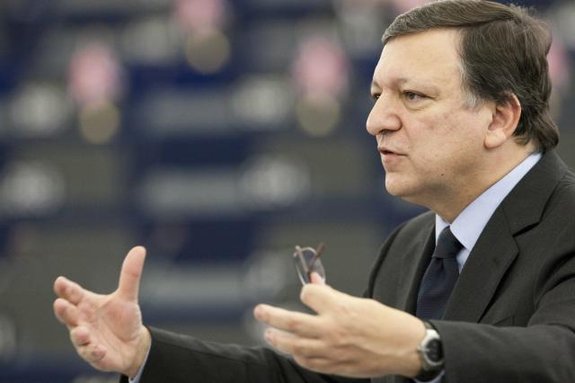 Commission President José Manuel Barroso yesterday (12 June) told the European Parliament that  member states should accept some of the chamber's demands for the 2014-2020 EU budget and strike a deal “as soon as possible”.


Barroso spoke to MEPs in the run-up to the 27-28 June EU summit, which is expected to adopt measures aimed at restoring confidence in the Union’s governance and boost economic activity.

The Commission President said it was time to develop what he called “a European consensus”.

“If we do not pull together, we will be pulled apart,” Barroso warned, borrowing a catchphrase from the early days of the eurozone debt crisis, when he said "we will either swim together or sink separately".

Barroso argued that to create jobs, the Union needed investment, and the obvious growth fund available was the EU's multi-annual budget for 2014-2020.

At the 8 February summit, EU leaders succeeded in reaching agreement on a €960 billion long-term budget, reduced from the €972 billion proposed earlier in November 2012.

However, the European Parliament made it clear that it would make full use of its new budgetary powers, setting off ‘trilogue’ negotiations with the Council and Commission (see background).

As the 1 July deadline for wrapping-up the talks approaches, Barroso urged EU member countries to co-operate with the Irish presidency “and to make a move in accepting the justified requests of the European Parliament, for example on flexibility”.

“As the Commission has always said the difference between commitments and payments in the European Council conclusions makes flexibility indispensable to a final agreement for the MFF,” Barroso said.

The EU leaders’ agreement sets the figure for “commitments” – the maximum amount of money allotted during the seven-year period – at €960bn, while budget “payments” – the amount of money that can actually be spent – have been reduced by €34bn to €908. Flexibility would make sure that the amounts committed are actually spent, and not returned to the net donors.

Barroso said programming should be completed as soon as possible in order for the new budget to have an impact on economic growth and job creation.

Joseph Daul, leader of the European Parliament centre-right EPP group, reminded that MEPs strongly insisted on flexibility, reactivity and a revision clause for the next long-term budget.

“In many EU countries we have to speed up the implementation of the programme on growth and youth employment. It is impossible with this inflexible framework. Without flexibility, the unfortunate Cypriots, the victims of the floods and the young unemployed will be put at the bottom of the list of priorities," he said.

Guy Verhofstadt, leader of the liberal ALDE group, strongly insisted on the revision clause, also in view of the 2014 European elections. He said that without such a clause, the next Commission President would be in a situation comparable to French President François Hollande implementing throughout his mandate a budget agreed under his predecessor Nicolas Sarkozy.

Speaking on 11 June, Irish Deputy Prime Minister and Foreign Minister Eamon Gilmore said good progress had been made at the “trilogue” talks held the same day and he believed a deal was within reach.

“We will resume for our fifth and hopefully last trilogue on 18 June in Brussels. I remain confident that we can reach an agreement if there is sufficient political will on all sides. Our common goal is to ensure that €960 billion in EU funding can be mobilised to support economic growth and job creation across Europe,” he said.

Budget Commissioner Janusz Lewandowski said following the “trilogue” talks that “genuine progress” had been made. But he added:

“No, we are not there yet, we will need another round of talks, next Tuesday in Brussels, but I believe that a deal is now within our grasp. […] Last night, the gap between the Council's and the Parliament's positions on the future flexibility of the EU budget and on a revision clause half-way through the next financial period got much narrower.

“Of course, there is still work to be done, of course other issues such as the future resources of the EU budget or the unity of the budget are not settled yet but nobody can deny that since last night's talks the scales of the MFF  negotiations are now tipped, even if lightly, towards a deal,” he added.

Member countries are pressing to conclude negotiations on the EU’s 2014-2020 budget before the term of the Irish presidency ends in June. Seven years ago, the political agreement on the 2007-2013 budget was reached in April.

But the European Parliament said it could not accept the budget deal in its current form and engaged in ‘trilogue’ negotiations with the Council and the Commission, led by the Irish EU Presidency, aimed at introducing flexibility, a mid-term review clause and more money for growth and investment.

If everything goes well, in autumn the Parliament and Council would need to approve by co-decision some 65 regulations, which represent the legal base of the EU budget.