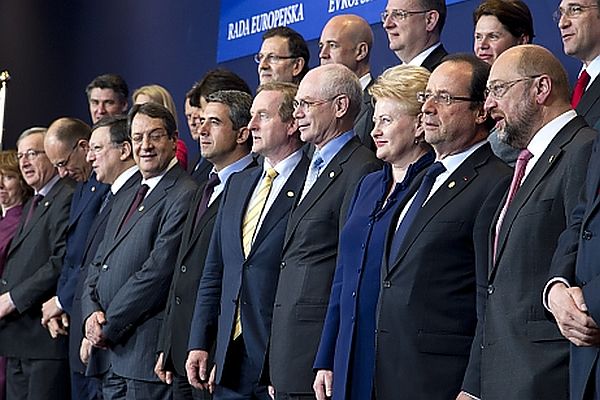 EU leaders committed to seek a broad global agreement to share data on foreign depositors to stymie tax-shirking companies and individuals at a summit in Brussels yesterday (22 May). Austria lifted its opposition in principle but support could fade should efforts to strike a similar deal with Switzerland fail.


The summit reached a compromise deal on the savings directive after Austria dropped objections to an exchange of bank information affecting EU deposits by the end of the year.

"It's a bad day for tax cheats," Austrian Chancellor Werner Faymann told reporters after the summit. "I believe we will manage the exchange of data by the end of the year," he said, adding later that although he was watching negotiations on a similar deal with Switzerland, Austria was in "full agreement".

The summit conclusions committed leaders to seek ambitious information-sharing proposals on an EU-wide and global basis, pushed originally by the United Kingdom, Germany, France, Spain and Italy – nations that are testing such a system and want to launch it before year-end.

The initiative is modelled closely on the US Fair and Accurate Credit Transactions Act, which requires American taxpayers to report their foreign financial interests, and has galvanised EU countries to act.

The issue has taken centre stage as EU nations deal with the effects of austerity and seek to maximise tax revenue.

"At a time when governments are trying to reduce their deficits, better fetch the contribution of those who do not pay taxes rather than go and ask payments to those who are already paying. It applies to individuals, it also applies to companies,” French President François Hollande said after the summit.

Referring to tax-optimisation by large companies, Hollande said it was “crucial” to fight against it. “it is very important that this struggle is conducted against so-called tax optimisation which is nothing other than the pursuit of zero taxation for a number of large groups."

Cameron claims ‘bit of a breakthrough’

British Prime Minister David Cameron is using his presidency of the G8 to promote the transparency initiative internationally, and has put tax at the top of the agenda for a meeting of the G8 in Northern Ireland next month.

German Chancellor Angela Merkel described the EU deal as an enormous step. "There is no doubt that the exchange of information about all kinds of income will be the rule for the future," she said.

Austria and Luxembourg have played for time on implementing the savings directive, with Luxembourg saying it would only implement the directive when similar agreements had been concluded between Switzerland and the EU. Switzerland is the world's biggest offshore centre, with €1.5 trillion in offshore assets.

Adopting the directive is politically sensitive in Austria, where centre-right Finance Minister Maria Fekter opposes the transparency requirements while the Social-Democrat chancellor, Werner Faymann, has disagreed with her.

Fekter’s hard line and talk of defending the interests of Austrian deposit-holders are seen as popular gestures ahead of a September general election.

The Commission estimates that tax evasion and fraud cost member states about €1 trillion a year.

"We cannot accept that a certain number of companies can put themselves in situations where they escape paying taxes in ways that are legal," French President François Hollande said after the summit. "We must coordinate at a European level, harmonise our rules and come up with strategies to stop this."

"We will work towards ensuring companies have to pay more where they are based," German Chancellor Angela Merkel told reporters, saying that new rules would affect big companies most, although it many cases companies are basing themselves in low- or no-tax jurisdictions.

"I think it's a very, very important progress that we haven't been able to make over many years. As the EU we would also like to give a contribution to placing this on the agenda of the international community. You probably know that the UK tends to put this on top of the agenda for the G8. We will address tax havens and also fight against tax fraud and tax evasion," Merkel said.

Luxembourg Prime Minister Jean-Claude Juncker played down his country's initial resistance to the information-sharing agreement on banking data. "We would like that there are first negotiations with Switzerland," he said, adding that this was not a precondition. "In light of these negotiations, we will, I hope, decide before the end of this year."

“The proposals on the table for strengthening the fight against fraud, tax evasion and tax havens are moving us in the right direction. They are necessary for a united Europe. We are living in a period in which we cannot afford to lose any time in fighting for every cent of public money. The EPP Group set the EU agenda for the fight against tax fraud, tax evasion and tax havens. We call on the member states to be more ambitious, to deliver results and to implement what has been agreed today.”

Green economic affairs spokesperson Philippe Lamberts, who attended the summit on behalf of the group, added:

“While EU leaders and governments are belatedly acknowledging the massive problem of tax avoidance and evasion, they are doing little concrete to address this €1 trillion issue. At a time of fiscal difficulties across Europe, the failure to do more is nothing short of scandalous. The one key issue on which progress was expected was on the deadlocked proposals to provide automatic information exchange under the savings directive, with a view to combating tax avoidance. Even on this one file, EU leaders have failed to deliver."

The challenge now is to deepen such cooperation and strengthen common tools. In this respect, agreement by member states on the revised Savings Directive is essential.