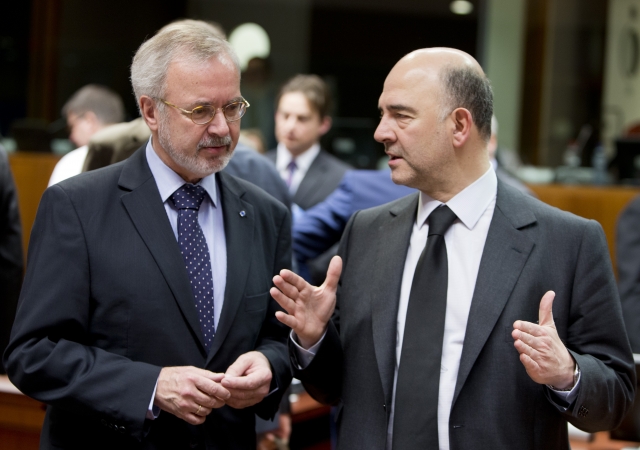 Ministers approved the regulation for the European Investment Plan Fund, as Italy pledged €8.0 billion to the programme, matching similar commitments from Germany, France and Spain.

“By reaching an agreement on the Regulation for a European Fund for Strategic Investments (EFSI) in less than two months, Member States deliver on the commitment they have taken at the European Councils in October and December last year,” European Commission Vice-President Jyrki Katainen told a news conference after ministers met in Brussels.

The Juncker Plan is supposed to unlock €315 billion to finance projects aimed at rejuvenating the EU’s moribund economy.

“The plan is the answer we need to confront the main handicap of the European economy: the lack of investment,” said Pierre Moscovici, Commissioner for Economic and Financial Affairs, adding that investment had fallen by 15 to 20 percent since 2008.

“We need to make long-term financing available for projects that contribute towards our common priorities for Europe: energy, digital, transport and innovation; as well as supporting the backbone of our economy: SMEs and mid-cap companies,” continued Katainen.

The plan is intended to spur growth in Europe through an elaborate scheme involving a total of €21 billion from the European Investment Bank and funds from the EU’s budget, which is supposed to unlock billions of private investors’ money.

The commitment from Italy and the other EU states is a bittersweet success for the Commission, which had originally hoped governments would contribute directly to the fund.

Instead, the contributions will be made only via national investment banks — thereby guaranteeing that the funds will go towards domestic projects. — in a blow to the Juncker Plan’s original EU-wide spirit.

As agreed by the European Council, the Fund should be up and running as quickly as possible to ensure that financing starts flowing to projects this summer, added Katainen.

The plan will run for four years but will be reviewed after three years to see if it is working.

A steering board made up by the European Commission and the European Investment Bank will oversee the fund, while an eight-member investment committee will choose the projects.

The list submitted in December, which EU officials stress is not definitive, includes plans for housing regeneration in the Netherlands, a new port in Ireland, and a 4.5 billion euro fast rail connection between Estonia, Latvia, Lithuania and Poland.

MEPs give green light to other investment funds

Meanwhile in Strasbourg, MEPs have adopted the rules for European Long-Term Investment Funds (ELTIFs). ELTIFs are designed to boost non-bank investment in the real economy across Europe.

They will help pension funds, insurance companies, professional and even retail investors willing to invest at least €10,000 over the long term in one or more ELTIFs, to put money into projects in their own countries or elsewhere, provided these projects benefit the EU economy, be it infrastructure, machinery or equipment, education, research or fostering the growth of small and medium-sized enterprises (SMEs).

Greeting the vote, MEP Alain Lamassoure, leading the file, said the new tool will not only give a major boost to financing long-term investment, as supported by the Juncker Plan, but will also help build the Capital Markets Union.

“The investment gap and financial crisis present us with the challenge of solving the tricky equation of maximising economic growth, increasing financial stability, removing barriers to cross-border investment, ensuring consumer protection, and enhancing competition all at the same time,” Lamassoure added.

"The speed with which the Council came to a common position is encouraging.  EFSI must be created rapidly, so we can scale up our activities and start delivering on the ambitious objective of mobilizing more than EUR 315 billion euros in investment,” said Werner Hoyer, President of the European Investment Bank.

Speaking at the meeting of EU finance ministers, Hoyer stressed that EFSI legislation needs to correctly reflect the responsibility and accountability of each of the parties involved. Hoyer stated: “Regarding the role of the EFSI ´Investment Committee’, the Committee’s task is to approve or reject the use of EU guarantees for projects brought to the EIB. Regarding all other aspects of projects the normal EIB approval processes will apply in line with the EIB statutes.”

Commission Vice-President Jyrki Katainen, responsible for Jobs, Growth, Investment and Competitiveness, said: "The ball is rolling! Italy is the fourth Member State to pledge a sizeable contribution to our Investment Plan for Europe. I am delighted that Member States are putting their money where their mouths are, helping us to make the most of the plan and to create jobs and lasting growth in Europe."

“Of course it makes sense, having an investment plan is fine,” said Benoît Potier, the CEO of French chemical company Air Liquide who is also chairman of the European Round Table of Industrialists (ERT), a business lobby group.

But he said a list of projects had to be put down in the first place before private companies put investment money on the table.

“If we don’t know which projects are going to be prioritised, what are the key priorities, we can’t make proposals. At this stage, it’s a declaration of intention.”

Sébastien Godinot, WWF Economist and author of the report From crisis to opportunity: Five steps to sustainable European economies, said: “Instead of the short-term ”grow dirty and clean up later” flawed narrative, President Juncker and EU leaders should look at the real symptoms of our troubled economies: diminishing natural resources and markets failing to take this into account. It’s simple: no economy can develop without natural resources.”

European Commission President Jean-Claude Juncker has announced a plan to mobilise €315 billion in an effort to reinvigorate the European economy.

Commissioner for Jobs, Growth, Investment and Competitiveness, Jyrki Katainen, planned the package to include a public-private partnership, to increase the loan capacity of the European Investment Bank (EIB) and the Union's other loan providers, to increase the level of investment by the member states in infrastructure and to continue to develop the single market.

The details of the plan were revealed on 25 November. Capital from the EIB, based in Luxembourg, is at the centre of the plan, which involves creating a European strategic investment fund, as well as tools to allow the EIB to take greater risks in its investments.

Solidarity with the countries of southern Europe, those worst affected by the crisis and austerity measures, is also an important part of the Juncker Plan.