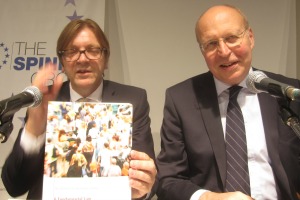 The federalist Spinelli Group and German think tank Bertelsmann Stiftung launched yesterday (3 October) a proposal for a reform of the Treaty of Lisbon in the form of a draft treaty called 'A Fundamental Law of the European Union'.

People present at the event were given copies of the 300-page book written in English which will be sold at the cost of €35, and which was dubbed by speakers ‘the treaty of Bozar'.

The book is in fact a legal text. It is preceded however by a more reader-friendly nine-page ‘Commentary’ which sums up the most important modifications proposed, the motives for those changes and the way forward.

Andrew Duff, who is an expert in constitutional law and appears to be the frontman behind the publication, said that 210 MEPs from four political groups, united in the Spinelli group, had decided last December to write a project for a new EU treaty, drawing lessons from the eurozone crisis.

He said that the proposed text could hopefully be used by a Convention to amend the present Lisbon Treaty, which could start work in the spring of 2015.

In the meantime, he said, the Spinelli Group was prepared to translate the proposed document in other EU languages and tour the EU to promote it.

A brief look at the book sows the following advances in EU integration proposed:

The eurozone crisis has shown that the intergovernmental ruling of the EU through a loose confederation of member states cannot work, argued Guy Verhofstadt, adding that the authors of the proposed “Fundamental law of the EU” were inspired by the German “Grudgesetz”.

The basic law or Constitution of Germany, approved in 1949, Grundgesetz für die Bundesrepublik Deutschland, became the cement of the nation, although it was regarded as temporary and the word Constitution does not appear in it.

Verhofstad said that “Grudgesetz” had put in place a decentralised federal state, and that the authors of the blueprint for the “Fundamental law of the EU” were inspired by it. He also said that the first 19 chapters of the blueprint (20 pages) described in an understandable way the Union and its institutions.

“You shall see, it’s not a liberal book about some changes in the treaties, it’s really a complete fundamental framework for the efficiency of the European Union of tomorrow,” Verhofstadt said.

Jo Leinen, who was one of the two European Parliament representatives in the European Convention launched by the Laeken summit in 2001 and completed its work in 2003, said that it was “a good moment” to launch this proposal after the German elections, which had overshadowed any political thinking about the future of Europe.

Leinen also regretted the fragmentation of the public debate about the future of Europe, also illustrated by the German election, and the lack of “European platform for common debate, for common solutions”.

He also said that the proposed blueprint would allow federalist forces to fight eurosceptics in the EU election campaign.

“People want clear messages, they want perspectives, they want hope, not despair. Our proposal gives hope that Europe will be better,” Leinen said.

Speaking about the differences of approach to European affairs in Germany, he noted that the Social Democrats wanted stronger EU institutions, while Chancellor Angela Merkel was in favour of having separate contractual agreements to solve problems when they appear.

In his statement, Roberto Gualtieri insisted that the proposed treaty changes did not include separate institutions for the eurozone, but rather stressed the preservation of EU's unity.