At a summit meeting in Brussels on Friday (24 October), EU leaders asked the European Commission to come up with a plan for better coordinating economic policies.

With a troubled European economy, and Germany’s reluctance to invest more in the eurozone, EU leaders agreed to work on a better governance structure, in order to coordinate actions that would boost growth in the 28 country bloc.

“We still have fairly big economic challenges such as unemployment. We also need to work for a better inflation rate,” said German Chancellor Angela Merkel.

“By December, we will hear from the Commission what kind of contributions we should make to the investment programme. We want proposals to be submitted so that we can better coordinate policies in the eurozone,” Merkel added, noting she has always been in favour of closer economic coordination.

Meanwhile, European Central Bank President Mario Draghi warned EU leaders that more needs to be done in order to avoid a return to recession, and asked them to come up with a calendar for structural reform by December.

Hinting to Germany, Draghi insisted that those countries with the requisite resources should consider stimulating demand by investing more.

“Draghi has pointed out the importance of structural reforms and creating right conditions for investment,” said Merkel.

EU leaders repeatedly said throughout the day that fiscal discipline has to go hand in hand with more investment to boost growth.

Draghi presented slides depicting the economic situation in the euro area. Those showing the situation of member states, specifically on government debt and deficit, were divided into three categories.

The countries with debt under 60% are Estonia, Luxembourg, Latvia, Lithuania, Slovakia and Finland.

The countries with debt between 60% and 90% are the Netherlands, Malta, Slovenia,Germany and Austria.

The third category of countries with debt over 90% are Spain, France, Cyprus, Belgium, Ireland, Italy, Portugal and Greece (174.9%).

On government deficits, the countries under 2% are Luxembourg, Germany, Estonia, Austria, Latvia, the Netherlands.

Those between 2% and 3% are Finland, Lithuania, Slovakia, Malta, Italy and Belgium. Those with deficits over 3% are France, Slovenia, Greece, Portugal, Cyprus, Ireland and Spain.

Regarding real GDP per capita, the slides show a widening gap between the US and the eurozone, unfavourable to the bloc of 17 countries. 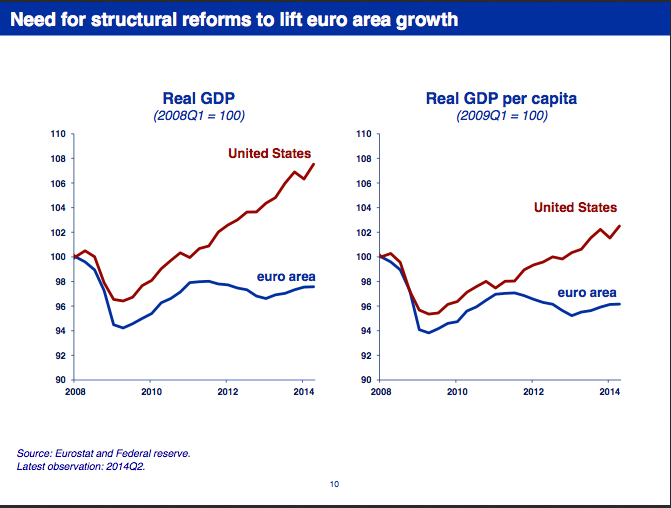 The European Commission has asked France for more information on its 2015 budget plan, French President François Hollande said after the summit. However, he ruled out making bigger savings than the unprecedented €21 billion already planned.

France is cutting its public deficit less quickly than promised to EU partners, raising the chances that the European Commission will reject its 2015 budget and ask for amendments.

Hollande’s Socialist government is wary of trying to squeeze more savings out of the budget on the grounds that tougher belt-tightening could undermine a fragile economic recovery.

Italy said it could cut its budget deficit slightly more than planned next year, after the European Commission request for clarification.

“We’re discussing one, two billion euros” in further cuts, Italian Prime Minister Matteo Renzi said. “The problem of €2 billion that could in theory be needed is truly a small effort” for Italy, he said.

Renzi’s government published earlier on Thursday a letter sent by the European Commission saying there was a “significant deviation” in next year’s draft budget from the debt-cutting pledges it had previously made to the EU.

Asked by journalists after the summit about the delicate situation of Italy and France, Commission President José Manuel Barroso said that he is in favour of more flexibility with the EU budget, including through an “investment clause”, but it was the EU ministers of economy and finance who had “killed” this proposal.

“We are in contact with the various governments, consultations at technical level are ongoing, to see what are their last positions concerning the draft budgets.  What the Commission needs to check before the end of the month is not if the budget is perfectly OK, but if there are or not particularly serious deviations [from the EU rules].”