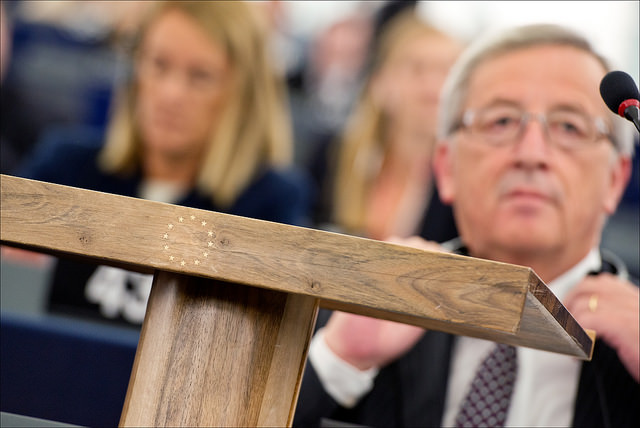 As Europe wakes up to a new executive, expected to be much more ‘political’, a chorus of reactions greets the change of structure of the new Juncker Commission, but analysts are adopting a wait-and-see attitude towards the new strategic rationale.

“This new Commission has the potential to break away from the guardianship of the Council. We count on Juncker to show such leadership,” Guy Verhofstadt, ALDE group leader said, stressing his disappointment at the number of women commissioners.

“What will play a crucial role in our assessment will be the commissioners designates’ commitment to our democratic values, the rule of law and which direction Europe should take,” Verhofstadt, referring to the hearings in the European Parliament, due for the end of September.

Juncker’s nominees are indeed subject to approval by the Parliament, which is expected to hold hearings on each appointee — but can only accept or reject the entire Commission, rather than approve some nominations, while blocking others.

In the past, the European Parliament has grilled a number of commissioners-designate. In 2004, MEPs forced Italy to withdraw the nomination of Rocco Buttiglione, whose portfolio was to include civil liberties, for his views on homosexuality and women. In 2010, Bulgarian nominee Rumiana Jeleva and commissioner-designate for humanitarian aid and crisis response – was forced to step down after making a flop of her hearing and showing little competence in the policy area.

Despite Juncker’s confidence that his team will not suffer any blow, sources point to Spanish commissioner-designate Miguel Arias Cañete.

Another candidate likely to be attacked by political opponents is Slovenia’s current caretaker Prime Minister Alenka Bratušek. A video circulating in social media shows her singing “Evviva il comunismo e la libertà“, the best-known line from “Bandiera Rossa”, also known as Avanti Popolo, one of the most famous songs of the communist era.

Beyond individuals, the structure of the new Commission makes analysts wonder whether it will achieve all it promises to achieve.

The European Commission, the EU’s executive, has evolved into dens of intrigue and bitter personality clashes. Above all, it has become an institution where individuals are not encouraged to speak up about its weaknesses or the incompetence of senior, tenured, and very well-paid staff, commented Carnegie Europe’s Judy Dempsey.

One wonders if Juncker’s new structure is aimed at cutting out the bureaucratic heaviness of the commission so he can deal directly with the vice presidents and get things done faster. Whatever the reason for the rejigging, power struggles cannot be ruled out, added Dempsey.

Juncker’s decision to give vice presidents a boosted role and making Dutch and Italian foreign ministers Frans Timmermans and Federica Mogherini, his right and left-hands, might create friction among former ministers, who might want to shine and drive their own portfolio rather than being dictated by a vice-president.

Commission sources insist that the new project teams comprising one vice president and the assigned commissioners will meet once a month and the vice president will have a coordinating role rather than a top-down approach.

“The idea is to prepare the work together so that there is better coordination on initiatives, that’s the role of the vice president,” the source added.

The new Commission College will have seven vice presidents, each leading a project team that the executive said mirrored political guidelines, such as Energy Union; Jobs, Growth, Investment and Competitiveness and Digital Single Market.

Observers though question the new combining of portfolios, like climate action and energy.

There is no strategic rationale for this and, if confirmed, it reduces our capacities to respond adequately to the global climate crisis both at home and abroad, said Mark Johnston of the European Policy Centre.

Also, the merger of the environment and fisheries portfolios, environmental protection overall has also been weakened by the new line-up, he added.

“Everywhere else in the European political arena environment and energy matters are with good reason handled separately. Greenhouse gas pollution and energy systems are quite different phenomena and so are measured and regulated in different ways,” he argued.

As ever with EU appointments, much will depend on the teams who will support the commissioners, analysts concur. But the big question is the role the EU’s new foreign policy chief will play. Mogherini, takes over that job from Catherine Ashton on November 1.

“With Juncker focused on jobs, growth, and the future of the euro, this could be a chance for Mogherini to give the EU the strategic direction and focus it sorely needs. If not, the EU can forget about being a real foreign policy player,” said Dempsey.

Surely, Juncker bets on that as he bets on the Dutch Timmersman to restore confidence and trust of European citizens in the EU.

Following Jean-Claude Juncker's announcement of his proposed new commissioners, the Socialists and Democrats in the European Parliament welcomed the balance of the team but warned that the new commissioners must be up to the job – the S&D Group will scrutinise the new Commission carefully.

Gianni Pittella, the president of the S&D Group, declared: "This is a balanced new Commission that will hopefully open up a new phase for the Commission, with an innovative structure and new development plans to overcome the crisis. However, the S&D Group is worried about the financial services and education and culture portfolios.

"Europe has to show its political strength and rise to meet the challenges of the current crises. "We are confident that with the appointment of Federica Mogherini, Europe will for the first time have a real foreign policy," he added.

MEP Georgi Pirinski (S&D, Bulgaria), expressed his disappointment for what he sees as an unbalanced Commission, in which the centre-right is given dominant positions. Pirinski, a former Foreign Minister, hints that the support of his group for the Juncker team in Parliament should not be taken for granted. Speaking to EURACTIV, he stated:

“The test for Jean-Claude Juncker was to propose a Commission which would clearly meet the demand of European citizens to turn to a new course for the European Union. This course would give priority to a social market economy, which would put an end to stagnation by stimulating demand through both investment growth and improving real incomes, thereby boosting the creation of attractive jobs. In short – the objective is to put an end to "business as usual".

“The first impression from the candidates’ portfolios announced by Juncker today is that he did not give clear signs of his readiness to deliver on this necessary and desirable change. On the contrary - through what appears as a new organization of the EU executive, he in fact preserves the dominant position of the conservative vice presidents and commissioners in charge of economic and financial policy. The issues of employment and social policy are subordinated to a vice-president from this political family.

“The support the Socialists gave to Juncker in the European Parliament on 15 July was linked to the firm understanding that when he would choose his team and would fine-tune his program, he would take into account the urgent need give a leading role of the social aspects in the work of the new Commission. This is why the proposed composition and structure raises serious questions about the possible support of the Group of Socialists and Democrats in the upcoming discussions on nominations and votes”, Pirinski concluded.

Syed Kamall, Chairman of the European Conservatives and Reformists Group, said: "We welcome the fact that the priorities for the commission Vice-Presidents are broadly aimed at economic reform, and we will work with them where the reform agenda is pursued in the day-to-day work the commission undertakes. This commission needs to focus on the areas where the EU can add value, and scale back on those areas that should be handled at a more local level."

It's shocking that Miguel Arias Cañete has been given the climate and energy post in the new Juncker commission. Green groups are already concerned about combining these two portfolios, but our concerns are compounded when we look at his personal background. This is a man who has had a long career in public office but who has also enjoyed a long list of private interests. For such an important EU role, and one which is likely to be the target of a lot of corporate lobbying, I think it is outrageous to appoint a former president of an oil company. The Spanish government should reconsider their nomination of Arias and MEPs should reject his candidature,"  said Corporate Europe Observatory.

The new Commission needs to work on developing better links between Foreign Affairs and International Cooperation and Development to tackle global crises such as conflict, the economy or climate change, says a group of leading think tanks. Often the link between external and internal EU policies remain “underdeveloped” due to overlapping responsibilities between the EEAS and International Co-operation and Development.

The European Commission is the EU body responsible for proposing and enforcing legislation, implementing EU policies, and representing the EU in the world.

The Commission is elected every five years, and it is composed of 28 members informally called “Commissioners”. Every member country appoints one Commissioner. The Council nominates one of the 28 members to become the president of the team. The European Parliament then has to approve the president-elect, and later on his new team.

Jean-Claude Juncker, the incoming head of the European Commission, unveiled an EU executive team today (10 September) that handed key economic responsibilities to French and British commissioners, but overseen by others, in a new-look hierarchy.