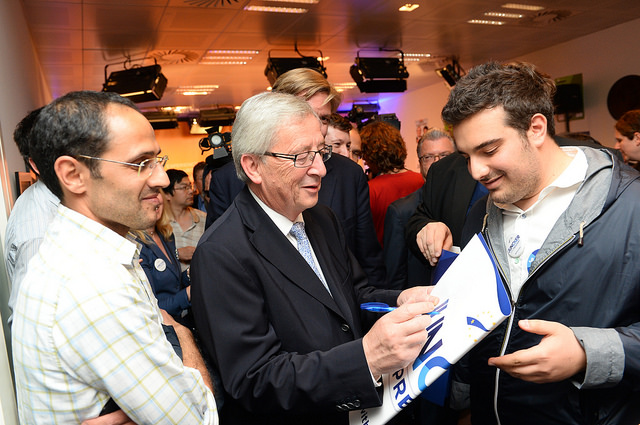 The European Union should respond to public apathy and anger with emotional intelligence, two analysts have argued in a 30-page paper which is likely to spark some debate in policymaking circles.

Heather Grabbe, director of the Open Society EU policy Institute and Stefan Lehne, a visiting scholar at Carnegie Europe, spoke to five average Europeans in Košice, Sofia, Lille and Athens to find out what people really expect from the European Union.

In the aftermath of the euro crisis, millions of Europeans have turned their back on mainstream parties and backed new Eurosceptic, populist and anti-establishment movements. The growing democratic disconnect, which brought parties like Syriza, Cinque Stelle and Podemos to the fore, is undermining the proper functioning of the European Union.

“We have witnessed real turbulence in European politics with some parties disappearing, others sprouting overnight,” said Grabbe. She noted some of these new parties were tricky, since they have no interest in getting involved in the details of legislation and are mostly absent from legislative debates, like that over the Passenger Name Records Directive.

“Instead of emotional intelligence, we risk having plain stupidity,” she said.

Europe is paying the price for promising what it cannot deliver. Liberal German MEP Alexander Graf Lambsdorff, speaking at the launch of the study, noted that politicians are to blame for promising l’Europe protectrice during political campaigns.

“But Europe is not in the business of redistribution,” he said, adding that this is a national competence.

The crisis has indeed shifted fundamentals that no government is really able to fully master, simply because the economy is now controlled by global forces. “A lot of the blame has gone to the EU. National politicians have found it convenient to blame the EU, but the reason is called globalisation,” Grabbe added.

Dimitar, a young blogger, Katarina, a factory worker and Alekosm, a pensioner, and the other two examples in the report – standing in for the 500 + million citizens – have all experienced frustrations with European democracy.

“They find local and national politics annoying and unresponsive to their needs, hopes and fears. The EU should be able to help them, in theory, but in practice it seems faraway, top-down, technocratic, obscure, unfair, and unaccountable,” reads the paper.

Some of the EU’s flaws can be tackled, but others are embedded in the EU’s structure, and would need a treaty change to be overcome.

However, trust has declined so much already that even a treaty change designed to enhance democratic participation would not pass a referendum in several member states.

Likewise, those who keep defending the EU with arguments of peace, stability and prosperity are dwelling in old paradigms, rather than embracing the societal shifts which would allow the European project to move forward into another era and get the necessary popular support, the experts emphasise.

So what are the ideas brought forward by the researchers, and their five Europeans? They stand on two democratic pillars: national parliaments and participatory democracy.

Both stood a chance with the Lisbon Treaty entering into force in 2009. But their potential has largely been underexploited.

“Politicians and institutions should become more emotionally intelligent about how they engage citizens- not just by showing that they sympathise, but by making incremental changes, however small, that enhance benefits of European integration as experiences by ordinary people,” reads the paper.

“If voters truly felt that politicians took them seriously, their confidence in the system would rise,” said Grabbe.

This can happen with MEPs engaging and connecting with the citizens through cyberspace. But since it’s not just a matter of communication, there is a need to blend more national and European public spheres by also allowing national parliaments to introduce ideas for the Commission to consider, for example.

MEPs should be given the right to speak in their own national parliaments.

“They are few enough that they would not take up excessive speaking time, and they could provide information and debate EU business with their national counterparts directly. Even better would be if the 28 commissioners addressed national parliaments on their areas of responsibility more often,” Grabbe and Lehne argued.

Up to now, EU institutions have been treating public participation as a one-way communications problem and an afterthought, Grabbe and Lehne pointed out.

Much of the participatory space has been filled by the massive lobbying industry. Investing in deliberative mechanisms can rebalance lobbying practices, Grabbe insisted.

The idea is that both the Commission and Parliament should invest more in web-based and other deliberative forums to discuss major initiatives. Commissioners could even cite opinions posted online in their speeches.

For example, the growing scepticism about the EU-US trade deal (TTIP) prompted by the perception that negotiations are only accessible to big business interests, could be avoided by organising deliberative polls.

Will the new Commission show its emotional intelligence by organising deliberative polls?

One thing is certain: The days when the preeminence of IQ as the standard of excellence is over, at least in the business world. Companies worldwide routinely look through the lens of emotional and cultural intelligence (EI and CI) in managing their business. The question is whether politicians will adapt.

The single candidates for the position of the EU Commission President was part of this attempt to spur voters' interest.