The National Front has corrected by far the most votes in the current legislature. [European Parliament]

Indecision seems to be a real problem among French MEPs, who have a habit of changing their mind after they have voted. Once a vote has been passed, the rules of the European Parliament allow members to “correct” any errors they may have made.

The French are the most frequent users of this procedure, with 24 corrections per MEP since July 2014, according to statistics from Swedish website Europortalen. 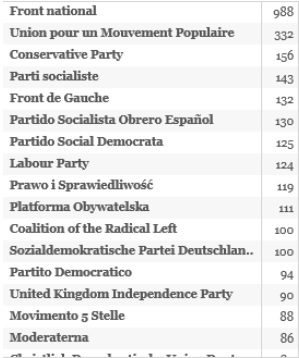 But the French National Front (NF) tops the list by far with a total of 988 corrections, followed by the French Republicans, with 332.

Once a vote has taken place, there is precious little gained by correcting an error: the result itself is not changed, just the voting record in the European Parliament’s archives.

“It is a political declaration that can be used to explain a vote or a clarify a complicated situation,” a source from the European Parliament told EURACTIV.

Voting sessions in the European Parliament can be long and complex. MEPs are supposed to be provided with a list of votes by their group or parliamentary assistant, which they are expected to adhere to.

“But they still have to be able to read it,” joked one MEP, for whom a high number of errors is a clear sign of incompetence.

These “errors” can also serve as explanations of votes that would be otherwise leave MEPs in a difficult situation with their electorate. MEPs often use the mechanism to vote in accordance with their conscience while officially toeing the party line.

This explanation certainly appears to apply to Jean-Luc Mélenchon, a member of France’s Left Front, who corrects an impressive number of votes. Of the 751 MEPs, he is joint first for the number of votes corrected, a position he shares with the National Front’s Dominique Bilde.

The two politicians often vote in line with their political groups, the radical left GUE/NGL for Mélenchon and the extreme right Europe of Nations and Freedom (ENL) for Bilde, before changing their votes to reflect their personal position in the Parliament’s records.

In a voting session in September 2015, Mélenchon corrected 14 consecutive votes, as attested by the Parliament’s official documents.

“We have a team briefing on the votes before each session. But then it is true that we reorient our votes and give explanations on many texts on our website,” Mélenchon’s parliamentary assistant said.

The NF’s leading vote corrector, Bilde, is at the forefront of the fight against animal cruelty, which is not a priority that necessarily sits easily with the rest of her political family. She recently submitted a resolution to ban the sale of key-rings containing live animals, which is apparently common practice in China.

The National Front and refugees

But the practice of correcting votes after the fact is the rule, rather than the exception, for many NF members. And on certain laws, the party seems to have made a serious number of errors.

One such example is the resolution on refugees adopted last September, which contained a package of measures aimed at helping Italy and Greece deal with the influx of refugees. National Front MEPs appeared to have been afflicted with a bout of indecision following the vote on the proposed amendments to this text: the party submitted no fewer than 45 vote correction requests on this piece of legislation alone.

Is it because they failed to understand the question, or because they did not want to assume responsibility for a vote in favour of hosting refugees? It is hard to say. Contacted by EURACTIV, the ENL group’s spokesperson at the European Parliament chose not to respond.

The numerous voting errors made by the extreme right party are undoubtedly related to the other problems that have beset the NF since the beginning of the legislature, according to a source inside the institution.

In the latest in a string of investigations directed against the National Front, French prosecutors have asked the European Parliament for details of how the party spends its European funds.

29 of the party’s European parliamentary assistants appear to have national, rather than European roles. Critics have suggested that this may explain the difficulty certain MEPs have in carrying out their work effectively.

Police searched the NF’s headquarters for evidence in this case in mid-February.

Last autumn, party leader Marine Le Pen was also suspected of voting fraud in the European Parliament, after her electronic voting machine continued to record votes in her absence.

During the most recent European elections, the website votewatch.eu highlighted the participation of certain MEPs in the legislative process, and drew particular attention to those on the extreme left and right. 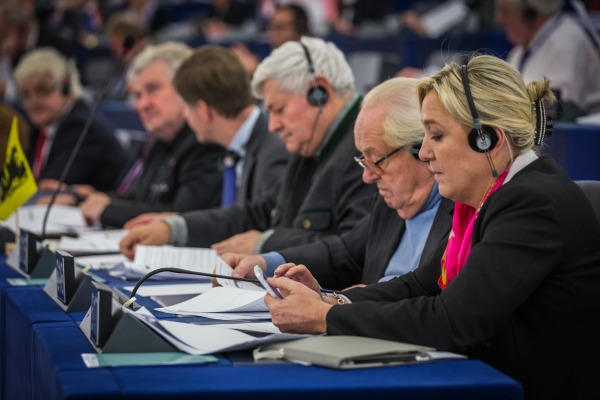 Mélenchon and National Front founder Jean-Marie Le Pen were among the most frequent absentees. Things have changed somewhat since the introduction of stricter rules, but old habits die hard.

Le Pen senior has taken part in just half of the European Parliament’s votes this legislature, leaving him in 747th place out of 751, just ahead of Nigel Farage, the leader of UKIP, in 748th place with 44%. Sergei Stanishev, the president of the Party of European Socialists is also languishing, in 722nd position.