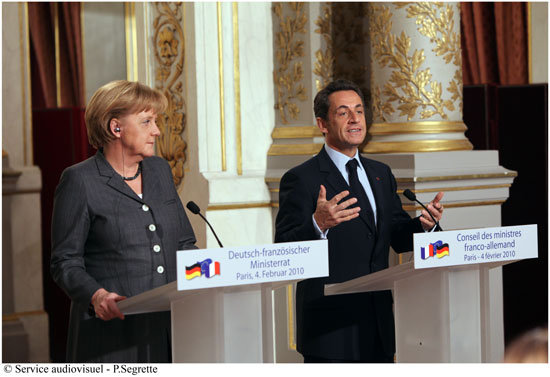 "The era of grand declarations and great treaties will begin to recede a little,"said Sarkozy, presenting 'Agenda 2020', a Franco-German blueprint for future relations between the two countries, at a joint press conference with his German counterpart yesterday.

"What is growth in the 21st century?"asked Chancellor Merkel. "We have to respond to this question together,"she said.

The announcement comes as EU leaders prepare to discuss the bloc's new '2020' strategy for economic growth at a summit on 11 February.

On foreign affairs, the pair spoke of "a common initiative for the Middle East,"preparing jointly for big international meetings like the G20 and "following up"together on Russian President Dimitry Medvedev's proposals to Europe.

"The Europe-Russia relationship is fundamental,"Merkel argued. "We have to end the Cold War once and for all."

The 10-page document of proposals for further Franco-German cooperation breaks down into six areas: the economy, energy and the climate, research, foreign policy and defence, citizenship, and institutional cooperation.

Concrete "projects"include a Franco-German storage facility to alleviate cross-border gas shortages, a joint school textbook on Europe and European integration, and the launch of a satellite to monitor greenhouse gas emissions.

Other objectives are more vague, referring only to "common implementation" of energy and climate legislation, or pre-existing initiatives such as a promise to table "common proposals for a strong food and agriculture policy".

Both nations pledged to push for EU-level action to reduce CO2 emissions, but did not specifically mention a tax on carbon. Last month, France outlined plans to unilaterally impose a carbon tax on large industrial installations from July, but the German government is known to be divided on the issue (EURACTIV 22/01/10).

Neither leader mentioned a specific timeframe or budget for implementing the new proposals.

"Some proposals are rehashes of the programme presented by France and Germany in 2003 to mark the 40th anniversary of the Elysée Treaty,"Wolfram Vogel of the Paris-based Franco-German Institute told EURACTIV France.

Vogel said around half of the forty proposals made at that time were taken up again in the 2020 agenda, including plans for French ministers to attend meetings of their German counterparts, and vice-versa.

The analyst was quick to stress that such "recycling" of old ideas is not necessarily a bad thing. "Stressing once again the desire to work together is far from negative," Vogel said.

"I think France and Germany are not so strong that they can convince the whole world to do what they want," Claira Demesmay, head of the French programme at the German Council on Foreign Relations, told Deutsche Welle.

"They are two nation states that are not all that big, and they know it. But just because you can't influence things, that's no reason not to act. They continue to try to convince the other countries, starting with the European Union and then moving further afield. But it's very difficult," Demesmay said.

As for the Agenda 2020 document, the analyst said "the focus seems to be quantitative, not qualitative. It's not a revolution".

The Franco-German relationship has long been considered an engine of European integration.

Yesterday's meeting, held in Paris between government ministers from all departments, is the twelfth time that the two countries have held joint cabinet meetings.

The Franco-German pledge to work together more closely in future comes as EU leaders prepare to meet on 11 February for a summit aimed at launching a new ten-year economic plan for Europe, known as 'EU 2020'.