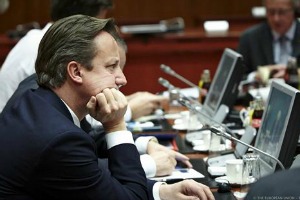 French President François Hollande said it looked unlikely that European Union negotiators would reach an agreement today (23 November) on the bloc's nearly €1 trillion budget for 2014-2020. German Chancellor Angela Merkel expressed hope that a deal could be reached at another summit early next year.

Meeting for their 25th summit in three years, EU leaders left the table at 2 a.m. and agreed to resume talks today noon, but little hope subsists that they can find common ground before another summit in early 2013.

“I believe that the positions are quite far apart, in certain respects,” Merkel told journalists, adding: “I believe that we will move forward a little tomorrow but I have my doubts that we will achieve a result … There is a high likelihood of a second stage.”

“Everyone agrees this is going to take time," Hollande told journalists. Asked whether EU leaders could fail to resolve their differences on Friday he said: “That's the most likely outcome.”

Following these meetings, Van Rompuy made changes to his proposal for the Union’s budget for 2014-2020. While keeping the overall budget figure roughly at the same level of €973 billion, he proposed an additional €8 billion for agriculture and €10 billion for cohesion.

On the other side, the new proposal is slashing €13 billion from the “Competitiveness for growth and jobs” budget category, which includes the Connecting Europe facility; €1.6 billion for justice and security; and €5 billion for external policies. In the initial proposal, this category was €152.6 billion.

“The proposal I put on the table is a moderation budget. The times call for it. Doing more with less money involves political choices. This is painful, even when cuts are evenly spread,” Van Rompuy told leaders.

Although hardly any country is happy with the latest Van Rompuy proposal, the main controversy appears to be between the United Kingdom, whose Prime Minister David Cameron wants deeper cuts, and France, which fights to preserve payments to its farmers at the level proposed by the Commission, which is €17 billion higher than the revised proposal.

France is also concerned that the cuts in the administration budget which Cameron is requesting would imply abandoning Strasbourg as one of the two seats of the European Parliament.

Hollande hit at the British rebate, won by then Prime Minister Margaret Thatcher in 1984, and introduced due to the fact that the Common Agricultural Policy benefits France more than Britain. The British rebate would remain under the Van Rompuy proposal.

“I cannot accept that the richest countries of the European Union come to request cheques, rebates and discounts and France, in addition, has to contribute to that. Everyone should make an effort,” Hollande told journalists Thursday night.

But other countries too frown at the Van Rompuy proposals. Estonia, Latvia and Lithuania, which were formerly part of the Soviet Union and need to build energy connections with the EU, will without doubt be affected by cuts to the Connecting Europe Facility.

Austria and Denmark, which have also asked for a rebate, are unhappy with the proposals. The Van Rompuy paper foresees annual “corrections” in favour of Germany (€2.8 billion), The Netherlands (€1.15 billion) and Sweden (€325 million).

Italy, a country that contributes more to the EU budget than it gets in return, is unhappy with the current proposals. Before the summit, an Italian minister threatened a veto, and in Brussels Prime Minister Mario Monti said that his country would not “accept the unacceptable”.

Poland and the other poorer East European countries fear further cuts in the budget in the course of the negotiations.

Also, Poland rejects the capping on spending on cohesion funding at 2.35% as proposed by Van Rompuy yesterday. Poland insists a return to the former figure of 2.4%, as the difference amounts to less revenue for the country of €1.5 billion.

European Parliament President Martin Schulz told EU leaders that the institution he represents is categorically opposed to the freezing of the EU budget, or multi-annual financial framework, let alone to cuts in that budget.

“You should understand that freezing or cutting the EU budget means abandoning the Europe 2020 Strategy,” he warned.

“We are looking to you to negotiate a sensible compromise today. If you fail to do so, the European Parliament will not give its approval to the MFF, because some Member States are trying to use the MFF negotiations to alter very nature of the EU. The European Parliament is categorically opposed to any such change.”

The European Commission presented on 29 June 2011 its proposals for the EU's 2014-2020 budget – the so-called Multi-annual Financial Framework.

The European Parliament declared in a resolution on 23 October that even the original Commission proposal for freezing the budget at the 2013 level would not be sufficient to finance existing policy priorities in the "Europe 2020" strategy, which comprises the new tasks laid down in the Lisbon Treaty.

The goal of the Cypriot presidency is to reach an agreement by the end of 2012, in line with the European Council conclusions of June 2012 [more].