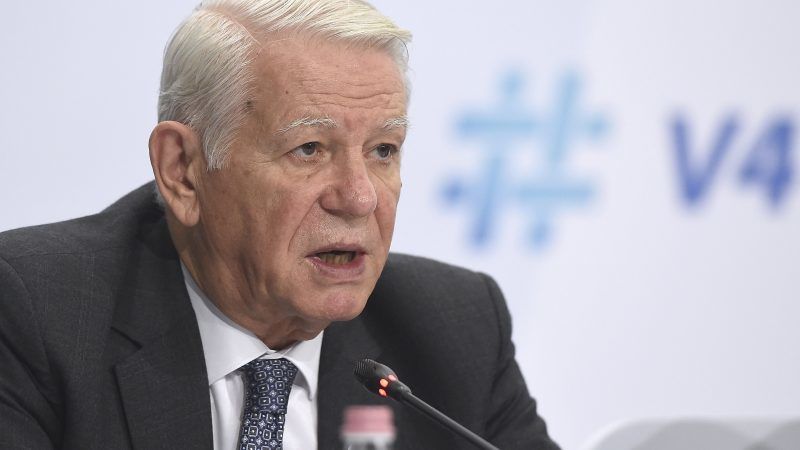 Romanian Foreign Minister Teodor Meleșcanu speaks during a press conference after the meeting of foreign ministers of the Visegrad Group or V4 countries and the Western Balkans and Slovenia, Bulgaria, Croatia and Romania at the Varkert Bazar (Castle Gardens Bazaar) at the foot of Castle Hill in Budapest, Hungary, 11 October 2017. [Tamar Kovacs/EPA/EFE]

“Linking the funds to other elements would constitute a gross violation of the EU’s fundamental principles,” Romanian Foreign Minister Teodor Meleșcanu said.

He added that the subsidies “have the fundamental aim of solidarity and convergence between economies of member states.”

He was speaking at a news conference with Polish counterpart Jacek Czaputowic who reiterated Warsaw’s opposition to introducing such conditionality, saying it “doesn’t conform to EU treaties”.

EU Justice Commissioner Vera Jourova said last week she had been tasked with “proposing a framework that would highlight the need to respect the rule of law” to benefit from EU funding in the bloc’s 2021-27 budget.

The main country to be affected by this would be Poland, the biggest recipient of EU money among EU newcomers, having been allocated €86 billion in the 2014-2020 budget.

But Warsaw is in an acrimonious tussle with Brussels over Polish legislation that critics fear will impinge on judicial independence, with the EU launching disciplinary proceedings in December.

Romania’s government too is under fire over legislation that Brussels worries will undermine the battle against corruption in the second-poorest country in the bloc.

The next budget is set to be a considerable source of friction at the next EU summit on February 23, with many member states also resisting proposals to hike budget contributions to fill the gap left by Britain.