Antonio Tajani said the EU would not ditch the Spitzenkandidaten system. [European Commission]

With just under two years to go until the next European elections, European Parliament President Antonio Tajani has sketched out campaign priorities that rebuff Euroscepticism and populism in favour of getting more people to come out and vote.

Speaking to public affairs experts during an EPC event in Brussels, Tajani singled out migration, terrorism and youth unemployment as the three main challenges Europe needs to find proper responses to before the June 2019 elections to counter populist pressures.

Putting the emphasis on the European budget and political responsibility, the president insisted on earmarking enough funds to show EU citizens that Europe is able to solve problems and can make a difference.

“The budget is a political strategy,” he said, stressing the need to have a proper political debate for the next Multiannual Financial Framework (MFF) starting to mitigate the eventual financial shortage that will arise thanks to Brexit.

As one of the biggest contributors to the EU budget, the UK’s eventual withdrawal from the Union could leave a financial gap in the EU coffers of 14-19%, or €20-27 billion.

The debate on the review of the EU budget has been going on for a while in both Brussels and the EU members, following the presentation of a “Reflection Paper” by Budget Commissioner Günther Oettinger.

But there are calls to make it much more inclusive and involve citizens ahead of the elections. Tajani seems to have received the message loud and clear.

Reading between the lines, Oettinger’s paper seems to recognise that it holds a wild card when it comes to the EU budget proposal, and that the Future of Europe debate will not actually be resolved until the key architecture of the budget is sorted. 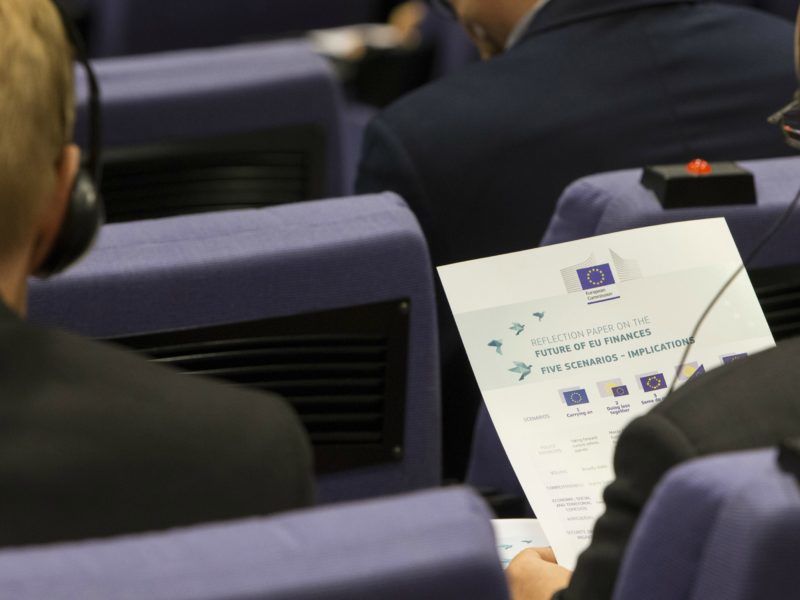 Next week, European Commission President Jean-Claude Juncker will deliver on Wednesday (13 September) his State of the Union address, revealing his vision for the future of Europe, after a number of months of reflection on five different possible scenarios.

In a veiled critique, Tajani said that “Without politicians and a political debate it is impossible to strengthen the European Union,” pointing to the European elections as the moment of truth.

Conceding there is a new political climate in Europe which seems more favourable to European integration, Tajani insisted that the opportunity should not be wasted and more politicians need to get involved in order to shape the future of Europe.

If citizens want Europe to tackle youth unemployment, terrorism and migration, European politicians need to show they can take political responsibility and forge a proper strategy.

Past successes in stemming the flow of migrants along the Western Balkans route should be translated to other routes, namely Libya, Tajani stressed, noting that migration in that part of the Mediterranean is a European problem not an Italian or Spanish problem.

That means investment. “Without the strategy for Africa it is impossible to find a sustainable solution to illegal migration,” the Italian lawmaker added.

Europe, thanks to the major turnaround brought about by foreign policy chief Federica Mogherini, is implementing instruments for investment, democratic support and capacity building, including the Trust Fund, Migration Compact and European External Investment Plan.

For the first time, there is an attempt to invest in the future of the continent. But that is not enough. So far €3.5 billion has been earmarked for Africa but €40 billion is needed, Tajani said, calling for a Marshall Plan for Africa.

Insisting there is a link between illegal immigration and terrorism, the president of the European Parliament was not shy to say that the EU should be much more present in the Balkans, where Daesh is believed to be strengthening its foothold.

“Even if I proposed a European FBI as a provocation, there is a clear need for more cooperation and more money in security,” he added.

But Tajani did not get into the institutional aspects of the 2019 elections. Briefly mentioning the Spitzenkandidaten system, he said it will not be ditched as it sets a clear and open process rather than a decision made in a secret meeting between EU leaders.

In November 2015, the European Parliament supported a reform to the EU electoral law that is intended to make the European elections more attractive. EURACTIV Germany spoke to one of the legislature’s vice-presidents about it.