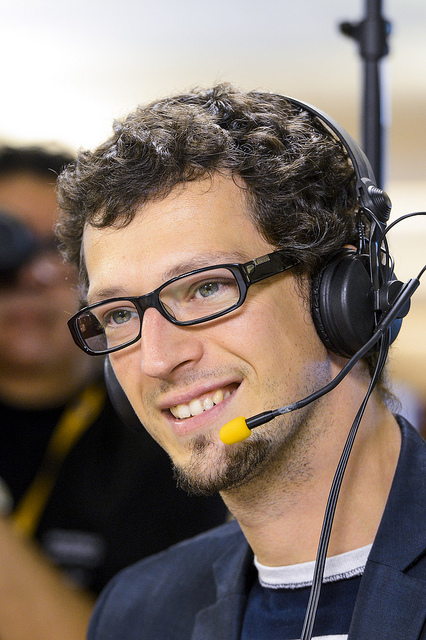 More than 5,000 young European came together last weekend in Strasbourg to discuss participation in the next EU elections, and issues important to youth, such as unemployment, education and the future of Europe. An event that top EU officials declined to attend.

Peter Matjaši? is the President of the European Youth Forum

This weekend was a moment to be proud to be a young European. The European Youth Event (EYE), which took place at the European Parliament in Strasbourg, brought together 5,300 young people from all the corners of the continent to meet and debate ideas for a better Europe.

Young people today are too often maligned for their lack of interest in politics and motivation to vote. But what we saw this weekend were young people from all or no political persuasion coming together full of interest, enthusiasm and bright ideas – from topics as diverse as unemployment and the digital revolution, through to the future of Europe. The common theme was the desire by the young people attending for their voice to be heard loud and clear by European leaders! That is why it was rather disappointing for the hoards that flocked to Strasbourg that there was lack of representation of European leaders at the highest level. Schulz, Van Rompuy and Barosso all declined the invitation to attend. This was their moment to let the youth of Europe know that their voice is heard and that their leaders are listening and, sadly, they failed to answer this call.

However, at the European Youth Forum we strongly believe that this event, as well as being an amazing opportunity to mobilise Europe’s young people, will also have a profound and lasting impact. The European Youth Forum, along with the European Youth Press – which sent 120 young journalists to cover every single debate and activity at the EYE – will produce a detailed report of the outcomes of the event. This independent report will be presented to the newly elected MEPs this summer and will be an invaluable way with which Europe’s young people can hold them to account.

The high-level debates within the Parliament were complemented by the activities and atmosphere at the YO!Fest which took place in front of the Parliament building over the three days. YO!Fest is the annual political festival run by the European Youth Forum. In its 5th edition, this year as part of the EYE, it was even bigger and better and at the concert on Friday night welcomed around 8,000 people in Strasbourg’s Place Kleber for the main act by Asian Dub Foundation.

What is unique about the YO!Fest is that it successfully manages to combine partying and a buzzing atmosphere with high-level political debates. There could be a debate about lowering the voting age to 16, meanwhile in the YO!Circus a troupe of young performers were doing a breathtaking circus routine! At the same time as young participants were trying out the skateboard park, there was a workshop on social entrepreneurship! It is this unique combination that makes the YO!Fest so special and which has proved, year after year, that young people do indeed care about politics, about important issues like voting, unemployment, education and the future of Europe.

To see this weekend as one giant party is to miss the point. The impact of EYE and YO!Fest will go beyond the happy buzz that the 8,000 young Europeans have taken home with them. It should live on and it should make this continent a better place for young people to live and grow up in.