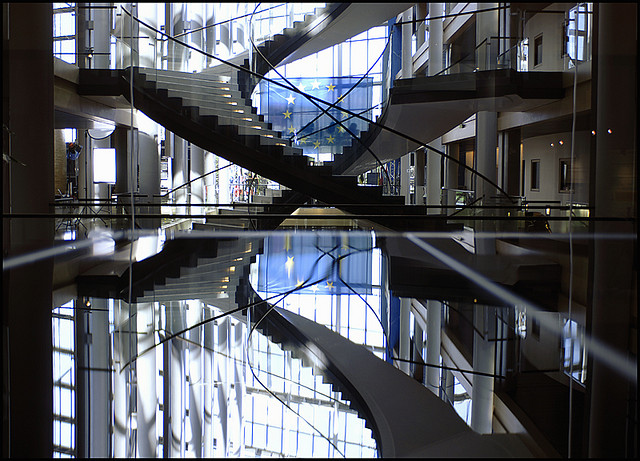 Unprecedented challenges are shaking up the European project and four distinct scenarios are possible for the future, writes Erik Peterson.

Terror in Paris.  Brussels on lockdown.  France is “at war,” says President François Hollande, while his far-right rival asserts “the French are no longer safe.” Across the region, nationalists are blurring the lines between refugees and terrorists.

Anti-immigrant sentiment is openly voiced by political leaderships in Warsaw and Budapest, while demonstrators take to the streets in Dresden.  All the while, the continent continues to face its greatest refugee crisis since the end of the Second World War.

Many are openly questioning whether border-free travel within Europe’s 26-country “Schengen Area” has reached its end.  The European values laid out in the EU’s Lisbon treaty of “human dignity, freedom, democracy, equality, the rule of law and respect for human rights” are under direct challenge.

In the meantime, there are continued concerns about the trajectory of the European economy.  Productivity continues to decline.  Investment is down.  Labor and other regulatory rigidities persist in casting a shadow over renewed growth.  And despite some improvement, unemployment is a major lingering concern—especially among younger cohorts.

Together, these elements suggest unprecedented constraints on the European experiment—especially when it comes to continued institutional development of the EU, on the one hand, and the capacity of the EU to generate support from younger citizens, on the other.

In many ways, then, the future of the region hangs in the balance.

To consider the outlook four distinct scenarios are possible, each of which envisions a compelling and plausible future for the EU, out to the year 2023–the 30th anniversary of the Maastricht treaty.

We call it “EU@30”. These contrasting visions of the future are based on two prevailing “mega-drivers” of change – the level of continued EU integration and the level of popular support for the EU, particularly among young people.

While these scenarios are not intended to predict the future, they do serve to illuminate a range of possible outcomes for Europe.  The purpose is to spark strategic discussions among leaders on where the continent can and should be heading.

The recent attacks in Paris, along with their aftermath, serve to underscore a key finding of the report – while Western unity in Europe and in the transatlantic relationship may be increasingly difficult, it has never been more essential.  Turning inward and sealing borders is simply not an option.  Strategic coordination between European governments and their allies – with support and expertise from the private sector where appropriate – is required to protect the achievements of the liberal order and values represented by the European Union.  A coordinated security approach and enhanced intelligence sharing, alongside economic efforts, such as the creation of a fiscal union, the passage of the Transatlantic Trade and Investment Partnership, and service sector and labor market reforms, all serve to strengthen the European project. The EU currently faces a great test, but to avoid the disorder envisioned in The Middle Ages scenario in 2023, coordinated and unified action to strengthen the European project must be taken now.