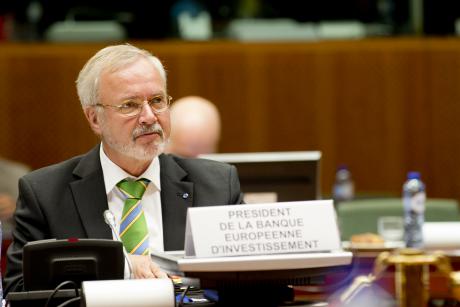 The financial crisis is not over yet but Europe has already conceptually wrapped it up, Werner Hoyer tells EURACTIV Germany in an interview.

Werner Hoyer has been President of the European Investment Bank (EIB) since 2012. From 1994 to 1998 he was minister of state in the German Foreign Office and from 2002 to 2009 he was deputy chairman of the liberal Free Democratic Party’s faction in the Bundestag.

You say Europe has conceptually wrapped up the crisis, while Angela Merkel has said the European financial crisis has still not been completely overcome. Is this a contradiction?

No. It is not a contradiction. If I say Europe has conceptually overcome the crisis, then I mean that we have taken all the necessary measures to regain control of deficits in the monetary union. We have tightened budgetary and macroeconomic surveillance in Europe and we have eliminated design flaws of the monetary Union by creating the bailouts EFSF and ESM – not to mention the fact that we are ready to begin the banking union. Furthermore, the states have improved their competitiveness and they are making progress in consolidating their budgets.

That is rewarded on the markets: Ireland and Portugal have left the bailout, Greece recently concluded a first “test-run” on the market and Cyprus intends to borrow money from investors ahead of schedule.

Naturally – and here I believe I am of the same opinion as the German chancellor – this crisis will not be over until reforms have made themselves noticeable on the job markets, when they prove to be sustainable and are not reversed after the first breath. But today we can justifiable say: Our crisis management plan that builds on the principle of “solidarity in exchange for solidity”, is bringing results.

Before the summer break, the ECB assembled a whole bunch of measures. The base rate, which has been reduced again, is almost zero at its current level of 0.15%. Is this an appropriate measure to avoid deflation in the eurozone?

At least it will set the right monetary impulses toward reaching the ECB inflation target of almost 2% in the medium term. As we saw in Japan, the “safety margin” included in this target is important regarding deflation. An adjustment of relative prices within the euro area will also be easier to reach if we maintain an overall inflation rate that is closer to 2% than 0%.

To boost economic activity in the crisis countries, Mario Draghi wants to inject up to €400 billion into the European banking system. Will this cash injection really produce the desired result?

That depends what the expectations are and how the announcements are being concretely developed. For the Central Bank, the measures are meant to recreate the transmission mechanism between monetary policy and granting credit. To boost lending to the real economy, it is also important to strengthen the banks’ abilities to take on risks. Here, the current euro-area-wide assessment of bank assets plays a decisive role in restoring trust.

Stimulation of the European market for asset-backed papers, which was strongly affected by the crisis of this market in the US and regulatory reactions to this, can also help free up credit in the banking system for new loans. All of these are possibilities that can help to boost lending again. As I said, now we will have to see how the ECB concretely develops its measures.

For the first time in the history of the monetary union, the ECB is sanctioning financial institutions in the eurozone that park their money at the ECB. Does this move make sense in light of experiences in Switzerland or Scandinavia, or does Draghi simply have no other choice?

As I already mentioned, the entire package of measures must be evaluated as a whole. Negative interest for cash deposits are flanking the new, long-term refinancing operations in particular. Of course here it is important to remember that these interest rates only apply to deposits that extend beyond the required precautionary minimum reserves. The desired result is that banks will no longer park their money at the ECB, but rather to bring this money into real economic circulation.

After Greece, Portugal and Spain, it is Italy and France who worry the ECB due to delayed reforms and low productivity. Do you share this opinion?

France and Italy have strong and quite diversified economies. Naturally both states – along with the other countries of Europe – must continue their course of reform and budgetary consolidation to increase their competitiveness. I am confident that the governments in Paris and Rome will implement the necessary measures.

Maybe just another word on Italy, which will take over the EU presidency in July: Prime Minister Renzi performed exceptionally in the European elections. As a result, he is predestined to provide new momentum in Europe, with his policies aimed at reforms and growth. I expect that we will witness important progress in the fight against unemployment under Italian leadership.

Angela Merkel is calling for a discussion in the EU to determine main points of focus for the next five years. What do you think these should be?

Over the last seven years, we have almost exclusively focused on overcoming the financial crisis. Now it is essential, after we have seen the light at the end of the tunnel, that we concentrate on the time after the crisis. Because we must not forget: We are still standing in global competition and the crisis has left considerable marks on the real economy. Let me provide a key figure on this: Still today, the Europe-wide level of investment is 15% lower than its level before the crisis in 2007. A quantitatively and qualitatively weakened capital stock is the result of this, hindering growth potential for the entire European Union.

The effects of this are most severe regarding investments for research, development, innovation and creating the network of infrastructure of the 21st century. Here the competitors, particularly the US, Japan and South Korea, have built up a considerable advantage. For this reason, we must spend more money in Europe in these areas. For me, that is the challenge of the coming years, to belong to the leading forces of technology again.

The European Commission says one of the main reasons for the economic downswing is the difficulty for SME’s to receive financing. What should the European Investment Bank (EIB) do in its role of supporting project financing to specifically provide better support to SMEs?

I can and will not leave this question the way it is. Despite our tradition of financing large projects, we have taken considerable efforts to support small and medium-sized companies as a part of overcoming the crisis. Last year along the EIB Group – made up of the European Investment Bank and the European Investment Fund – offered almost €22 billion to small and medium-sized companies as well as so-called mid caps. That benefits around 230,000 companies, employing around 2.8 million people.

That is a clear signal that we take our public duty seriously and jump into the game when financing bottlenecks constrict the real economy. And as a matter of fact that is not done with tax monies. We give out loans with reduced rates of interest and longer terms that we collect through the international capital markets. This is possible because we have a triple-A rating from international rating agencies.

You call for a tough approach to tackling high youth unemployment in Europe. What must concretely happen to do this?

The heads of state and government introduced measures last summer to fight youth unemployment in Europe. At that time, I agreed in the European Council that the EIB would contribute €6 billion for the creation of jobs and improving training opportunities. At the end of 2013, that sum reached €9 billion. In the current year we will provide at least €6 billion again.

But we must still not deceive ourselves regarding the fight against youth unemployment. Europe, and that includes the EIB, will not be able to solve the problem on its own. The main responsibility lies with the member states, who must create the necessary conditions through structural reforms to adequately prepare young people for the job market.