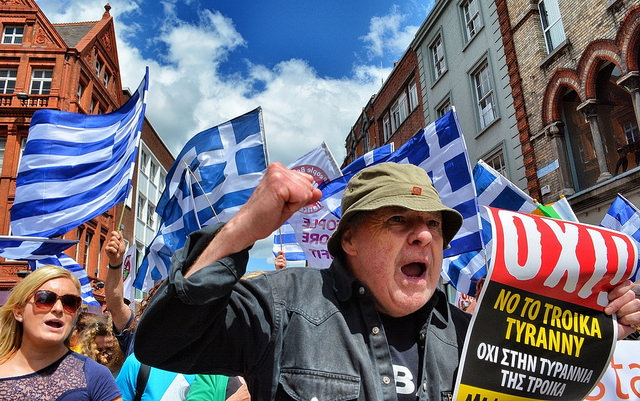 In Greece, hospitality is a concept as old as the Acropolis. But the country’s hated creditors cannot expect the usual warm welcome when they arrive this week to thrash out a third huge international bailout.

It has been more than a year since top negotiators from the International Monetary Fund, European Union and European Central Bank – together known as the “troika” – last set foot in Athens, and the symbolism of their return is not lost on Greeks.

The three institutions became a widely loathed emblem of the painful austerity demanded by Greece’s creditors in return for two previous bailouts, cuts many say brought the country’s economy to its knees.

“The troika represents pure brutalisation,” said 28-year-old Marios as he smoked a cigarette in the doorway of his T-shirt shop in central Athens.

“They make these plans that affect our lives,” he said. “But things are getting worse and worse. I don’t know when we’re going to hit the bottom of the barrel. People don’t have work, they don’t have enough to eat.”

In late January a new government led by radical-left party Syriza came to power, with Prime Minister Alexis Tsipras vowing to confront the troika and restore “dignity” to Greece.

But six months later, the negotiators are on their way back to discuss a third rescue – worth up to €86 billion euros ($94 billion) – which Athens hopes will prevent it from defaulting on its huge debts and crashing out of the eurozone. Again, the cash is conditional on more tough economic reforms.

They will come at a time when a quarter of Greeks are already unemployed and Standard and Poor’s rating agency predicts the battered economy will contract by another 3% this year.

All over Athens, graffiti reading “Oxi” (“No”) is a reminder of the 61% who voted against more cash-for-austerity in a referendum on 5 July urged on by Tsipras himself, who then went on to sign the country up for more unpopular reforms in exchange for the bailout.

Return of the monsters

The troika remains a sorely sensitive political symbol in Athens.

“Return of the troika monsters,” read a headline Saturday on Iskra, a website run by hard-left members of Syriza who oppose Tsipras on the bailout.

When Tsipras became prime minister he banned talk of the troika, insisting they be referred to as the “institutions”.

And when the creditors sent technical experts to Athens in March, his government took pains to emphasise they were junior officials who should not to be compared with the troika auditors that Syriza had accused of storming into ministries like colonial “invaders”.

Yanis Varoufakis, then the finance minister, banned the experts from his ministry and said relevant documents would be sent to their hotels instead.

Such antics may seem petty, but they are indicative of what the troika came to symbolise in the eyes of their critics: soulless bureaucrats who descended on Athens quarterly to tell Greeks they weren’t cutting hard or fast enough.

“It’s like they hate us,” said Athens market trader Sofia Politou as she sat in the afternoon sun.

“They say they’re helping us, and then they ask us to do very hard things. They need to let us develop the country,” she said.

Asked to describe to relationship between Greece and the troika, she mimed the bowing of a slave, fanning her arms up and down before imaginary creditors.

They want our head

In September, meetings with the EU-IMF mission chiefs for Greece had to be relocated to Paris because their Athens visits had become such a magnet for anti-austerity protests and strikes.

This time around, their arrival – along with representatives of the ESM eurozone bailout fund – has faced delays, reportedly over issues including whether they would be allowed to base themselves in central Athens.

A top finance ministry official insisted the reasons for the delay were “technical” rather than “political or diplomatic” and that talks would open on Tuesday.

“They’ll do their job,” sighed Fotis Konstantinidis from behind the bar of his cafe, which he set up two years ago when the crisis forced him out of work as a tailor.

Like many, his attitude towards the creditors is one of both anger and resignation.

“Greece is like bit like a cow,” he said with a smile. “They want to cut off our head. But rather than killing us, why can’t they see that we have milk to offer?”

Greece should aim for ambitious reforms in negotiations on its third bailout programme, the German finance ministry said on Monday, adding the talks should be conducted thoroughly and without any time pressure.

After a delay of a few days, Greece and its creditor institutions started preparatory talks in Athens on Monday on an aid programme from the European Stability Mechanism (ESM).

Asked about a German media report that creditors were willing to loosen austerity requirements, a finance ministry spokeswoman said: “This has to be an ambitious ESM programme because of the financial needs of the Greek government.”

“It is important that the negotiations are conducted thoroughly and it remains to be seen when these talks will be completed,” she told a regular news conference in Berlin.

Der Spiegel magazine has reported that creditors were willing to ease austerity measures for Athens because the Greek economy had deteriorated so badly that the once planned budget targets now seemed to be “illusory”.

Experts from the European Commission, the European Central Bank and the International Monetary do not expect Greece to reach a primary budget surplus this year, the report said, citing “troika sources”.

For 2016, the new primary budget surplus target would be 1% instead of 2% and the budget target for 2017 would also be lower, although the report did not give a figure.