Frankfurt and the cathedral of the euro. [Alex Guibord/Flickr]

The euro, used by nearly 340 million people each day in 19 countries, marked its 15th birthday on 1 January without celebration. A Eurobarometer report published in December shows little enthusiasm for the currency in non-eurozone countries.

The euro was launched on 1 January, 1999, initially existing only as a virtual currency used in accounting and financial transactions. Euro coins and notes were introduced on 1 January 2002.

At that time, the EU consisted of 15 member states. All the countries which joined since – Poland, the Czech Republic, Slovakia, Hungary, Slovenia, Estonia, Latvia, Lithuania, Cyprus and Malta in 2004, Bulgaria and Romania in 2007 and Croatia in 2013, are required to adopt the currency as soon as they are ready, under their accession treaties.

Such an obligation didn’t exist for older members. This is why the UK, Denmark and Sweden stayed out of the euro.

In the meantime, seven out of the 13 new members made it to the eurozone. Slovenia joined in 2007, followed by Cyprus and Malta in 2008, Slovakia in 2009, Estonia in 2011, Latvia in 2014 and Lithuania in 2015. There is a tradition that all new euro members join the eurozone on the first of the year. 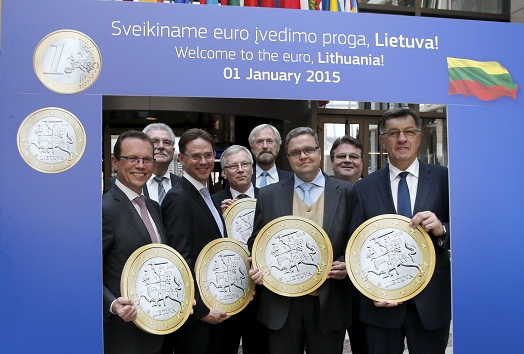 Lithuania joined the eurozone at the stroke of midnight on Thursday, hoping to anchor itself in Europe, as its former master Russia flexes its military muscle in the region.

The crises of the eurozone gave second thoughts to some of the countries outside the eurozone, particularly Poland, currently led by a eurosceptic government. None of them is in a hurry to adopt the currency.

A Eurobarometer study published last December shows that the six countries where a majority of respondents oppose the euro are all located outside the eurozone: the Czech Republic (72% “against”), Sweden (69%), the United Kingdom (67%), Denmark (64%), Poland (57%) and Bulgaria (50%).  Countries with a high opposition to the euro are Croatia (43%), Hungary (41%), eurozone member Cyprus (43%) eurozone member Italy (37%) and Romania (35%). Incidentally, Romania’s results are the closest to the EU average. In Romania, 55% approve of the euro and 35% disapprove, while in the EU-28, 58% approve and 36% disapprove.

Previous Eurobarometer studies have shown similar results, and in the midst of the eurozone crisis, the overall support (EU28) for the common currency was 52%.

In a recent speech delivered in Italy, Benoît Cœuré, a Member of the Executive Board of the ECB, acknowledged the lack of confidence of many Europeans in the EU currency, but insisted that ultimately responsibilities lie with national governments, who need to conduct structural reforms.