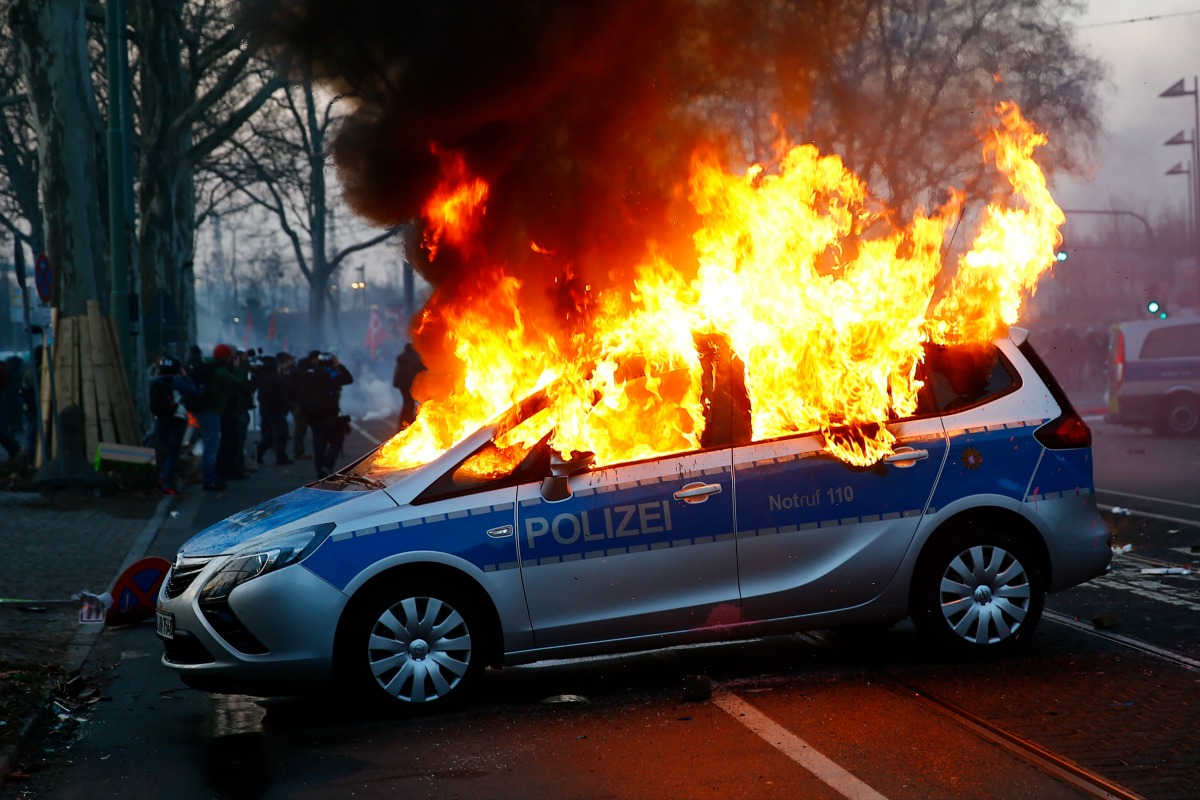 A German police car that was set on fire by anti-capitalist protesters burns outside the European Central Bank (ECB) headquarters hours before the official opening of its new building in Frankfurt March 18, 2015. [Reuters/Kai Pfaffenbach]

Violent clashes between anti-austerity protesters and German police left dozens injured and a trail of destruction in Germany’s financial capital as the European Central Bank opened its new headquarters Wednesday.

In fierce street battles that began in the early hours in Frankfurt, 14 police and 21 protesters were wounded, police and rally organisers said.

Police also said they had made 19 arrests by 1700 GMT, mostly on charges of disturbing the peace and arson after seven police cars were set ablaze and a police station was pelted with rocks.

Firefighters also came under attack during several of the 47 times they were called out to douse the flames of burning automobiles and barricades made from toppled garbage bins.

Police said 80 officers had been hurt by an irritant gas, but were later put back on duty, while Blockupy protest organisers said on Twitter that over 100 demonstrators were injured by tear gas and pepper spray.

Blockupy attempted to distance itself from the violence, which was timed to protest the official opening of the ECB’s new 1.3-billion-euro ($1.4-billion) towering headquarters.

“This is not what we in Blockupy had planned,” spokesman Ulrich Wilken told a news conference.

But he said he “understood” people’s anger at the “policies of impoverishment” being imposed on people by governments and international creditors in crisis-hit eurozone countries.

Another Blockupy spokesman, Christoph Kleine, estimated that around 6,000 activists had joined the morning’s activities, including 1,000 from outside Germany.

A march through the city centre and rally on Frankfurt’s historic Roemerberg square in the afternoon drew 15,000 people according to police, while organisers put the number at 20,000.

As the sun set the rally remained peaceful, with marchers chanting “solidarity means resistance”, even as a large police contingent looked on and police helicopters circled overhead.

The target of protesters’ anger was the ECB’s new 185-metre high twin-tower headquarters, officially opened by the central bank’s president Mario Draghi at 11:00 am.

Draghi, addressing some 100 invited guests at a low-key ceremony, rejected blame for the suffering brought by budget cuts and austerity policies amid the financial crisis in Europe.

“As an EU institution that has played a central role throughout the crisis, the ECB has become a focal point for those frustrated with this situation,” Draghi said.

“This may not be a fair charge — our action has been aimed precisely at cushioning the shocks suffered by the economy,” he said.

“But as the central bank of the whole euro area, we must listen very carefully to what all our citizens are saying.”

German Economy Minister and Vice Chancellor Sigmar Gabriel said that to blame the ECB for Europe’s woes “testifies to a significant lack of understanding about what the ECB is currently doing for cohesion in Europe”.

Draghi, referring to the protests outside, said it was a “very difficult situation” and offered “truly special and warmest thanks to the police and the security forces”.

Kleine argued that police should shoulder some of the blame for the morning’s violence, accusing them of using excessive force to provoke demonstrators.

Authorities had mobilised one of the biggest ever police deployments in the city, which has seen its share of street violence. At a rally in March 2012, a policeman was seriously injured when protesters went on the rampage in the city centre, causing around one million euros worth of damage.

Finance Minister Wolfgang Schäuble said that “no one has the right to threaten life and limb of police and firefighters”. Blockupy brings together anti-capitalist and anti-austerity protesters from across Europe. They camped out in tents at the foot of the ECB’s old Eurotower headquarters in Frankfurt for months in 2013.

Speakers at the final rally included members of protest groups such as Attac, trade unions as well as Greece’s governing leftist Syriza party, and Miguel Urban of Spain’s left-wing Podemos.

Until last year, the ECB, which took over monetary policy in the single currency area in 1998, had been housed in a skyscraper, known as the Eurotower, in downtown Frankfurt.

The European Central Bank (ECB) is the EU institution which administers the monetary policy of the 19 eurozone members. The bank is located in Frankfurt.

EU institutions and national governments are bound by treaties to respect the ECB's independence.

However, the bank's autonomy has repeatedly come under fire, especially in France, where policymakers see monetary policy as a tool for economic policy.

As the sovereign debt crisis swept across Europe, the ECB progressively took a more political role, buying up debt on the secondary market to prevent fragile eurozone countries from going bankrupt.

This culminated in January 2015 when the ECB launched an unlimited government bond-buying programme, which will pump hundreds of billions of new money into the sagging eurozone economy.

The ECB also won sweeping new regulatory powers as part of Europe's Banking Union aimed at addressing the weaknesses of the monetary union.