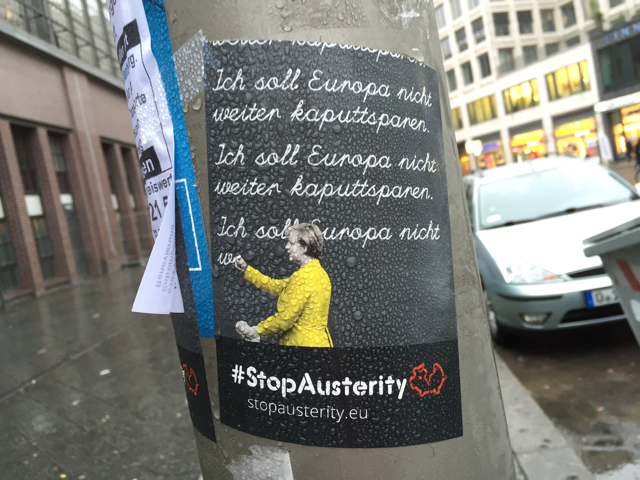 Several European countries will break their budgetary commitments this year to grow their economies. But without coordinated EU policy, any attempt to relaunch the European economy will fail. Our partner La Tribune reports.

The European Commission has been quietly relaxing its approach to member states that break the budgetary rules, in order to avoid harming the bloc’s fragile economic growth. This approach could not be more different from the years 2011-2013, when countries in deficit were subjected to severe “adjustments”, to borrow the technocratic term, which pushed the eurozone to the brink of the recession from which it is still struggling to recover.

In 2016, France, Italy, Spain and Portugal will deliberately break certain rules and abandon programmes they had previously adopted. Cutting the deficit will take more of a back seat.

Economists from HSBC calculated that Italy could have reduced its public deficit by using lower interest rates to cut the state’s financial costs. But Prime Minister Matteo Renzi chose not to do this. The Italian stability programme (of 2015) aimed to bring the public deficit to 1.8% of GDP in 2016. In reality, it will reach 2.4%. “We should still be concerned with the deficit, but less with decimal points,” the Italian premier said.

France is supposed to reduce its structural deficit by 0.8% per year in 2016 and 2017. That was the deal it made with Brussels. But the HSBC experts predict a reduction of only 0.3% this year. Austerity may be prevailing in public spending – French spending has not progressed so little for 20 years – but the Pact for Growth, Competitiveness and Employment, based on a series of tax breaks and fee waivers for businesses, has had an impact on the government’s tax revenue.

It is possible that Brussels, which approved the French budget, may impose corrective measures on Madrid and Rome in 2016. But it will not return to the austerity of 2012-2013. The time for the strict observance of the treaties appears to be over.

Germany is the only member state with a budget surplus, and is reducing its national debt faster than planned. What is more, its surplus is almost 1% of GDP, well above the 0.5% objective stated in the EU treaties. For the economists of the European Commission, Germany’s budgetary policy is too restrictive… though this analysis would hardly be aired at a political level.

HSBC’s experts see Germany’s management of the refugee crisis as a golden opportunity to push the country’s spending up by 3.8% in 2016, unheard-of in a country that has made drastic budget cuts in 2011 and 2012.

An economic recovery on the horizon?

This certainly can’t hurt the eurozone economy, but in a vacuum it will not change much: more spending is needed, particularly public investment. Even some German experts agree: an official report ordered by the Minister of the Economy, Sigmar Gabriel, put Germany’s cumulative investment gap at €90 billion. But Angela Merkel will not hear of plans to increase public investment.

Germany continues to post a record surplus in its balance of payments. At over 8% of GDP, there is clearly a strong link to the country’s growing exports. This figure explains the lack of consumption and investment in Germany, where workers produce for foreign markets and the country accumulates colossal savings.

Because of Germany’s current account surplus, a sign of a macro-economic imbalance according to the European treaties – which fix the maximum balance of payments surplus for a member state at 7% of GDP – the whole eurozone will produce more than it consumes and invests this year.

This current account surplus could reach 3% of eurozone GDP, which means European governments could easily spend more whilst remaining firmly in the black. But the Germans refuse to spend their way to growth, a policy which would pave the way for a more relaxed monetary policy.

By launching its quantitative easing programme, albeit belatedly, the European Central Bank (ECB) did all it could to support the European economy. This action brought down interest rates and devalued the euro, which was obviously beneficial for exports. But without a coordinated budgetary policy, as ECB President Mario Draghi said, this could only achieve so much.

The risk is that the eurozone may maintain this balance of underemployment, with long-term under-utilisation of its production capacity. A small economic upturn, like the one foreseen for 2016, with growth predictions at around 1.5%, will not help to rectify this situation. GDP in France has still not recovered to 2007 levels, a situation unheard of since this measure of economic activity was introduced in 1949.

Even liberal economists like Patrick Artus believe the workings of what is supposed to be an Economic and Monetary Union are under threat. In a recently published study, the Chief Economist at Natixis, a French investment bank, questioned the lack of political coordination in Europe and its consequences.

The divergence between Germany, which refuses to take any budgetary measures to encourage a real economic recovery, and the countries of Southern Europe “creates severe inefficiency”, Artus wrote. Not only by reducing overall demand, but because a country’s policy of using its budget to relaunch economic growth can also benefit its neighbours.

For the French economist, the European Commission’s 2011 decision to force countries to cut their budget deficits was also disastrous for the eurozone economy. As many economists predicted at the time, this policy pushed the eurozone into recession.

Competition on the cost of production

Then there are policies related to pay. If uncoordinated, they can lead to a situation whereby countries compete on the cost of production. This is harmful to everyone. The effects of such competition can be seen in Germany, where pay suffered greatly from 2000 to 2007. By so reducing its production costs, the German economy was able to win market share from other European economies. And overall, the eurozone gained nothing. Spain has been practicing a similar policy since 2009.

But what would have happened if these policies had been coordinated? Artus argued that wages would be higher (leading to higher demand in Europe) and inflation stronger (firmly brushing aside the risk of deflation).

Finally, tax competition – lowering corporate taxes in order to attract investment – leads to “competitive bias between countries”, according to Artus. Tax competition can bring disproportionate benefits to the mobile elements of the economy, to the detriment of others.

A Europe where governments had coordinated their economic policy in recent years, under the guiding hand of the European Commission, would now have higher wages, greater public investment and lower taxes on work and consumption. In total, economic growth would have been stronger, and Europe’s employment figures would now be healthier.

>> Read: Xavier Timbeau: ‘The Juncker Plan is not working’

0 responses to “Are we seeing the end of austerity in Europe?”