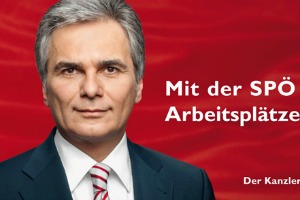 Greece should get more time to repay its debts provided that it sticks to reforms and savings targets agreed with the European Union, Austrian Chancellor Werner Faymann said, taking a softer line than neighbour Germany, which has so far opposed any delay.

Greece's future and whether it stays in the eurozone is expected to be shaped by a series of crunch meetings in September and a progress report from European Union and International Monetary Fund inspectors on public sector cuts required in exchange for billions in aid.

Germany and France both said after recent meetings with Greek Prime Minister Antonis Samaras that Greece's leaders must show their commitment to reform, and Germany is showing little inclination to consider any delay.

But Austria and others in the eurozone's stronger economies have often provided advance warning throughout three years of crisis of the line the bloc's leaders will finally take.

"I see quite a good chance that we will arrive at an outcome with Greece that the Greeks stick to their agreements with the EU but in return get more time for the repayment," Faymann, who is also chairman of the Social Democratic Party of Austria (SPÖ), told newspaper Österreich in an interview published on Sunday (26 August).

"The most important thing is that the Greeks stick to the reforms and savings targets agreed with us. If that is guaranteed, I am in favour of a delay in the repayment," he said, adding that the delay could be two or three years.

"The request of the Greeks for a half year or even two years more [to implement their reforms] cannot work because it is not only a question of time … Everybody must recognise that time always means also money," he said.

"If the reforms are not undertaken there can be no further aid," Rösler said in comments that echoed those of German Finance Minister Wolfgang Schäuble in an interview published in the Tagesspiegel newspaper.

Faymann said he was optimistic that Greece would stay in the eurozone, but said the scale of the crisis and of unemployment in Greece was so great that the country would not manage to do so without a repayment delay.

"But nothing is decided yet," he said. "After the troika's report in the middle of September we will see clearly."

Austrian Finance Minister Maria Fekter, a member of the conservative People's Party that governs in coalition with the Social Democrats, argued against giving Greece more time.

"To extend the time again now without changing something is not on," she told Switzerland's NZZ am Sonntag newspaper.

In the meantime, German Chancellor Merkel cautioned politicians in her coalition against talking up the possibility of a Greek exit from the eurozone, urging them to weigh their words "very carefully".

Merkel allies, particularly the Bavarian Christian Social Union (CSU), have stepped up criticism of Greece in recent weeks, with senior CSU lawmaker Alexander Dobrindt saying at the weekend that he expected Athens to be out of the euro zone next year.

"My plea is that everyone weigh their words very carefully," she said.

Key to restoring credibility will be Greece's attempt to push through €11.5 billion of cuts over the next two years as demanded under the €130 bailout - which Prime Minister Antonis Samaras's administration has yet to fully piece together after weeks of wrangling.

Samaras and his moderate leftist and Socialist allies have broadly agreed on the measures, but the government is still struggling to nail down the final cuts amid howls of protest over plans to slash pensions and put civil servants in a so-called labour reserve before laying them off.

European leaders say any decisions on Greece will depend on the report by inspectors from the "Troika" - the European Commission, the European Central Bank and the International Monetary Fund.

Next September, the Troika  will determine whether Athens gets the next tranche of its bailout. If not, Greece will be bankrupt.

0 responses to “Austrian chancellor breaks ranks with Germany on Greece”