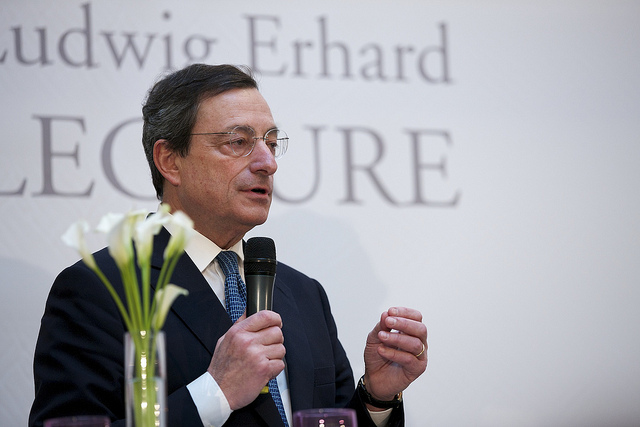 Mario Draghi has struggled to get banks lending to businesses. [INSM/Flickr]

European Central Bank (ECB) plans to bolster lending to business were dealt another setback on Friday after banks decided to repay billions of euros of cheap ECB credit, sapping money available to lend to business.

The news came a day after the central bank’s fresh offer of up to €400 billion of low-cost loans fell flat, casting doubt on its plans to shore up the eurozone’s faltering economy.

On Friday (19 September), the ECB announced that banks would repay almost €20 billion euros of similar credit, known as long-term refinancing operations, that the ECB had advanced at the height of the eurozone’s debt crisis.

That could signal that money from the central bank’s latest round of cheap credit is simply being recycled to pay back old loans, rather than being lent to companies.

In any event, the unexpected spike in the weekly repayment of the ECB loans, handed out to avert a credit crunch, erodes funds available to lend now.

“This money will probably not get to the real economy,” said Michael Schubert, an economist with Commerzbank, commenting on this week’s round of cheap four-year loans. “That’s in large part due to weak credit demand.”

The ECB has slashed the cost of borrowing to near zero and flooded banks with cheap credit, but it has been unable to coax them into lending more. That means much is now riding on its pledge to buy repackaged debt, known as asset backed securities.

ECB President Mario Draghi is expected to outline how this will work in the coming weeks. Many experts believe the market for packages of loans, often secured on homes, is too small to have much impact on lending.

One reason for low bank lending in many of the 18 countries in the euro zone is nervousness among businesses, made worse by the conflict in Ukraine and the sluggish economy. That can be seen in low price inflation, which plumbed new lows in August. Friday brought more bad news as one closely watched measure of inflation expectations hit its lowest point this year.