Cyprus to get bailout from EU, Russia: President 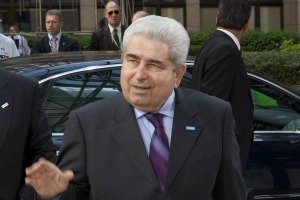 Cyprus President Demetris Christofias said today (5 July) that his country, which has just taken over the rotating EU presidency, would seek financial assistance from both the European Union and Russia. While EU conditions were harsh, Moscow’s help was “not forbidden by EU law” and has no strings attached, he said. euractiv.com reports from Nicosia.

“We have asked Russia and the European Union [for a bailout] at the same time,” Christofias said.

Christofias said there was “nothing wrong” with taking a loan from a country that is not member of the EU, saying Russia has “very good, traditional relations” with Cyprus and is ready to assist it “unconditionally”.

He added that his country was still waiting for Moscow’s reply.

Cyprus is expected to seek and obtain a €6-billion bailout from Russia. This would not be the first time that the island country would turn to Moscow – last year Russia gave Cyrpus a €2.5-billion loan.

At that time, the authorities said there were no political strings attached. Asked to comment over the possible new Russian loan, a European Commission official said EU countries had the right to seek financing on the world market.

Christofias condemned the negative stereotypes about  Russia and said he had discussed his intention to ask for Moscow's help with other EU leaders at their 28-29 June summit, in order to avoid “rumours”.

“I asked the members of the European Council, if you were in my position, if you had a problem as we do have a problem with the banking system, and if you address yourself to a country with which you have a very good relationship … and if you succeed [to obtain] very good terms, unconditionally and without compromising your independence and sovereignty, to take this loan, are you going to say no?”

The Cypriot president, who is the leader of the Communist AKEL party and studied in the former USSR, said “Russia is not the Soviet Union of yesterday or the day before yesterday”, but a country trying to develop a capitalist system.

While last year's Russian loan to Cyprus had no strings attached, Christofias indicated that in contrast, he expected the terms of the EU bailout aid to be tough.

“However, we did address ourselves to the European Stability Mechanism, the Troika [Commission, ECB and IMF] is here. We are going to have serious discussions with the representatives of the Troika, for the terms of the assistance on behalf of the ESM, and nothing is wrong in my opinion,” Christofias said.

He stressed that his country was going to repay for all the assistance it would get.

The Cypriot president spoke through an interpreter to 63 journalists accredited to the EU institutions who were invited on a press trip to Cyprus. Christofias spoke at length about his unsuccessful efforts to advance reunification talks in the divided nation.

Dervi? Ero?lu, who was elected leader of Northern Cyprus in April, has been pushing for the establishment of two separate states, instead of reunification, Christofias said. Ero?lu told him that reunification talks were “taking a break” until the elections in Cyprus, eight months from now, at which Christofias will not seek re-election.

Christofias had harsh words about Turkey, which invaded the northern part of the island in 1974.

He advised Turkey to stop behaving as “a colonial power”, accusing the EU candidate country of  bringing Turkish nationals from the mainland to boost the population of the north. The North has now some 280,000 inhabitants, while the overall population of the island is around one million.

Christofias insisted that the northerns and southerners shared the same culture and civilisation and are much closer to each other than Cypriots from the North are to  mainland Turks.

Northern Cypriots, he added, were worried about loosing their Cypriot identity as the result of Ankara’s policy of assimilating this population to Turkey.

The second half of 2012 marks the first EU presidency for Cyprus, which joined the EU in 2004 and became a eurozone member in 2008.

The country sees its EU stint both as a challenge and an opportunity. As a relatively new member state, it hopes to enhance its image as a credible and responsible member of the Union.

Cyprus assumed the rotating presidency of the Council of the EU in difficult times and in a tense atmosphere with Turkey, an EU candidate country that doesn’t recognise and has occupied the northern part of the island since 1974.

Despite the occupation, Northern Cyprus is technically EU territory. The so-called Northern Cyprus Turkish Republic is recognised only by Ankara and its only air link is with Turkey. It is also excluded from international sport, finance and trade, and is heavily subsidised by Ankara.

Turkey stated that it will boycott the Cyprus presidency, or freeze relations with the EU, and even warned that it could annex Northern Cyprus if no agreement was reached on the reunification talks.

Cyprus is heavily exposed to the Greek crisis and is in search of a bailout to salvage its banking system.

0 responses to “Cyprus to get bailout from EU, Russia: President”