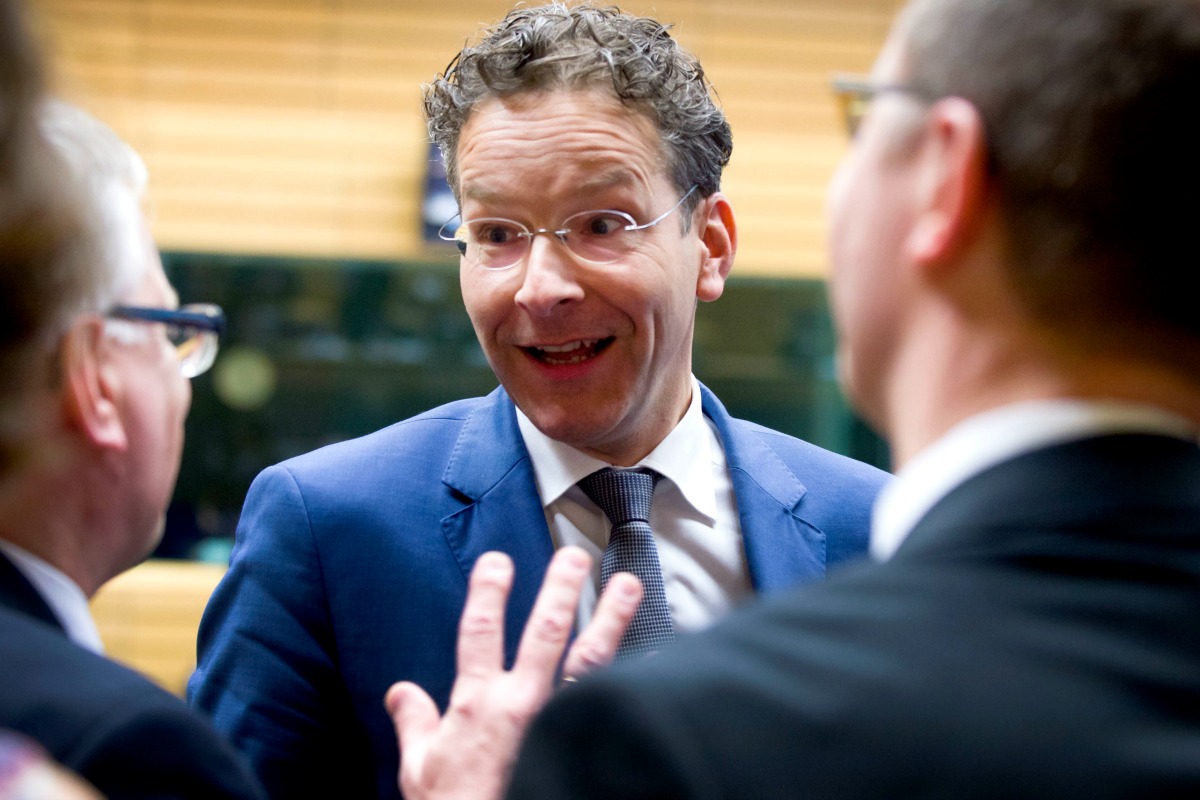 Jeroen Dijsselbloem, President of the Eurogroup. 10 July, 2015. [Council of the European Union]

Dutch Finance Minister Jeroen Dijsselbloem, re-elected on Monday (13 July) to a second term as Eurogroup chairman, has in two years risen from virtual obscurity to a respected and unflappable dealmaker who helped guide Europe through the worst hours of the Greek debt crisis.

Only two months after elected as Dutch finance minister in November 2012, Dijsselbloem, now 49, was thrust into heading the powerful Eurogroup of 19 finance ministers – and headlong into his first debacle, the crisis in Cyprus.

In a baptism by fire, the bespectacled and straight-talking Dijsselbloem afterwards drew criticism for his handling of Cyprus’ cash crisis, put down mainly to his inexperience in global economic affairs.

The deal, in which Dijsselbloem orchestrated a bailout loan in return for tough reform conditions, was criticised when a major Cypriot bank was forced to close down and major investors lost money.

Dijsselbloem then sent markets into a tail-spin with a comment that the Cyprus model could serve as a template for future bailouts. He later clarified that Cyprus was “a specific case with exceptional challenges.”

Equally ill-considered was a jibe at his predecessor Jean-Claude Juncker, whom he in typical Dutch straightforward fashion called an “inveterate smoker and drinker”.

The curly-haired Dijsselbloem – pronounced “day-sell-bloom” – stoically weathered both storms and has since become respected for his cool and calm approach – sometimes to the major irritation of others.

However Dijsselbloem has paid close attention to criticism over the past year, which saw him bloom into a skilled and no-nonsense negotiator.

His first breakthrough came in early 2014, when he put together Europe’s banking union, an ambitious project devised to protect taxpayers from forking out public funds in case banks go bankrupt.

Against the odds, Dijsselbloem found agreement between different European institutions as well as France and Germany.

Since then, the ever-growing Greek euro-crisis has taken up much of “Mr Euro’s” time.

But amid his sparring with the hot-headed Varoufakis, Dijsselbloem has maintained dialogue with Athens, even travelling there directly to discuss the issue with Greek Prime Minister Alexis Tsipras.

His bid for re-election received a blow however when Germany officially announced it would back his main opponent, Spain’s Luis de Guindos, as his successor.

Dijsselbloem’s strong views on financial austerity however has won him a friend in German Finance Minister Wolfgang Schaeuble.

At the same time, his French socialist counterpart Michel Sapin recently praised him for doing a “very good job”.

The Dutch financial daily, Financieele Dagblad, has called him “business-like and patient”, while the centre-left De Volkskrant once described him as “a little stuffy and as loyal as a guide dog”.

But mainly “it’s his frankness that makes Dijsselbloem loved or hated. Whether friend or foe, nobody disputes his qualities,” the Algemeen Dagblad said.

Dijsselbloem studied agricultural economics in the Netherlands and business in Ireland and early on acquired a reputation as a back-room strategist, quietly working out of the limelight.

Positioned on the right of the Netherlands’ left-of-centre Labour party, Dijsselbloem shares his party’s pro-European vision, while backing balanced budgets and austerity measures.

Dijsselbloem was born in the southern city of Eindhoven, into a mostly apolitical family.

His political awakening came aged 15 when he took part, against his parents’ will, in a 1983 protest against a Cold War nuclear missile installation.

A father to a teenaged son and daughter, Dijsselbloem is an admirer of trumpet great Miles Davis and of the British comedy series Monty Python’s Flying Circus.

In an interview at the end of December 2012, shortly before being appointed Eurogroup chairman, Dijsselbloem told De Volkskrant he was a “Father Christmas in reverse”.

“Because I have to make sure that no presents are handed out, and that everyone pays up on time,” he said of the unenviable role that no doubt will continue as one of Europe’s most powerful financial officials.

Dutch Finance Minister Jeroen Dijsselbloem was appointed President of the Eurogroup on 21 January 2013. The Dutchman was elected by his eurozone peers for a two-and-a-half year term that can be renewed.

Dijsselbloem (pronounced ‘die-sell-bloom’) succeeded Jean-Claude Juncker, who has chaired the Eurogroup since 1 January 2005 and was its first-ever permanent president. Prior to Juncker, the group was chaired on a rotating basis.

Dijsselbloem was initially criticised for his relative inexperience - he had been finance minister of the Netherlands barely six weeks when his name was first floated as a Eurogroup contender.

The Eurogroup president is elected by a majority of its members, in line with the Protocol on the Eurogroup, which was introduced by the Treaty of Lisbon (protocol No. 14).