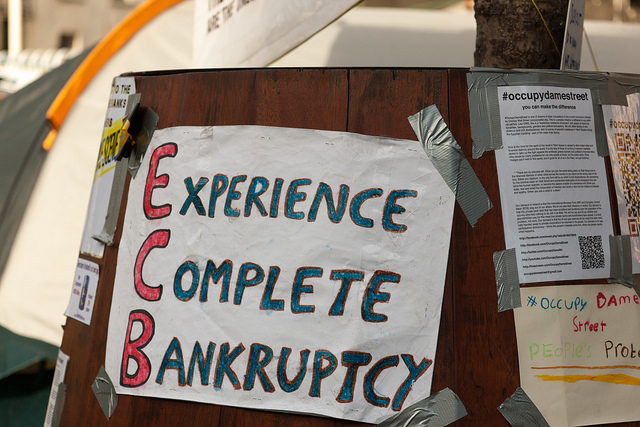 Roughly one in five of the eurozone’s top banks failed landmark health checks at the end of last year, with nine Italian lenders falling shorts in a comprehensive assessment released on Sunday (26 October) by the European Central Bank.

Painting a brighter picture than had been expected, the ECB found the biggest problems in Italy, Cyprus and Greece but concluded that banks’ capital holes had since chiefly been plugged, leaving only a modest €10 billion to be raised.

Italy faces the biggest challenge with nine of its banks falling short and two still needing to raise funds. The test, designed to mark a clean start before the ECB takes on supervision of the banks next month, said Monte dei Paschi di Siena had the largest capital hole to fill at €2.1 billion.

The exercise provides the clearest picture yet of the health of the eurozone’s banks more than seven years after the eruption of a financial crisis that almost bankrupted a handful of countries and threatened to fracture the currency bloc.

While 25 of the eurozone’s 130 biggest banks failed the health check at the end of last year with a total capital shortfall of €25 billion, a dozen have already raised €15 billion this year to make repairs.

A recent investor survey by Goldman Sachs found they believed the ECB ought to ask lenders to raise an additional €51 billion of capital for the tests to be credible.

Although investors may take heart, it remains to be seen whether the exercise can spur banks to lend more as the region’s economic growth stutters to a virtual halt.

“There is some pick up (in demand), but it is still slight,” Constancio told Reuters. “All this now can really start to change the environment and we hope it will also change the reality.”

Alongside Italy, regulators said three Greek banks, three Cypriots, two from both Belgium and Slovenia, and one each from France, Germany, Austria, Ireland and Portugal had also missed the grade as of end-2013.

Analysts generally gave the results a cautious welcome, saying they marked the beginning rather than the end of a banking clean-up in Europe.

“However, important challenges remain unsolved. The stress test alone will not end the credit crunch for small and mid-sized companies in Southern Europe.”

Some were more critical. “This seems as if it has been pretty unstressful,” said Karl Whelan, an economist with University College Dublin.

“The real issue is the size of the capital shortfall and that is very, very small. I don’t feel a whole lot more reassured about the health of the banking system today than last week.”

The exercise nonetheless provided a snapshot of banks’ vital statistics and forced them, for example, to revise the amount of risky loans – which have not been serviced in 90 days – upwards by €136 billion to €879 billion.

Only the beginning of a cleanup

The exercise is is credible, said Nicolas Veron of Brussels think tank Bruegel. “But it is only the start of a longer sequence of cleanup that will extend well into 2015.”

The ECB’s passmark was for banks to have high-quality capital of at least 8 percent of their risk-weighted assets, a measure of the riskiness of a banks’ loans and other assets, if the economy grows as expected over the next three years, and capital of at least 5.5 percent if it slides into recession.

Banks with a capital shortfall will have to say within two weeks how they intend to close the gap. They will then be given up to nine months to do so.

The ECB staked its reputation on delivering a thorough assessment in an attempt to draw a line under years of financial and economic strife in the bloc.

For many banks, the biggest impact of the tests was not in identifying capital holes but in finding that their assets, such as loans, had been overvalued.

In total, the ECB said banks had been valuing their loans and assets at €48 billion more than they are really worth. This was because they had not recognised €136 billion of bad loans.

That accounted for €11 billion of the €25 billion banks were collectively short of at the end of last year. It also eroded €37 billion of capital amongst the banks that passed.

Among the major listed banks, the biggest hits were to Greece’s Piraeus bank, whose core capital fell by 3.7 percentage points after the ECB adjusted the bank’s capital to reflect the new asset valuations.

Monte dei Paschi’s capital was reduced by almost a third. There was also a big impact on Austria’s Erste Bank.

The adjustments put many banks in an uncomfortable position. Thirty-one had core capital below the 10 percent mark viewed by investors as a safety threshold, while a further 28 were had ratios just 1 percentage point above.

The ECB will not immediately force lenders with overvalued assets to take remedial action but they will have to hold more capital eventually, leaving less room to expand, lend or pay dividends.

For overall lending, the more fundamental question is whether the demand for credit is there in a moribund eurozone economy. (Additional reporting by John O’Donnell and Paul Carrel in Frankfurt, Huw Jones, Steve Slater and Clare Hutchison in London, Carmel Crimmins in Dublin and Michelle Martin in Berlin. Writing by Mike Peacock and John O’Donnell, editing by Alexander Smith and David Evans)

Gerry Rice, Director of the Communications Department at the International Monetary Fund (IMF), issued the following statement: "The IMF welcomes the successful completion of the ECB’s Comprehensive Assessment of banks in the euro area. The exercise has used a common framework to assess the capital needs of banks and marks the substantial progress that has been achieved towards a banking union. The high level of transparency and comparability of the results will enable market participants to make their own assessments of bank health, which should help boost confidence. Altogether, the exercise provides an important basis for further strengthening bank balance sheets, dealing with weak institutions, and additional lending to support the recovery.

"We agree with the ECB that this is an important first step and support its determination to repeat the exercise annually and constantly enhance the process."

Speaking shortly after the publication of stress tests, the Chair of the Economic and Monetary Affairs Committee of the European Parliament (the ECON Committee), Roberto Gualtieri, said: "Since the beginning of the financial crisis, the European Parliament has been fighting hard to create genuine, strong financial supervision at EU level. Today’s announcements are a crucial step towards the full implementation of the Banking Union that will put an end to market fragmentation. The importance of the work of the ECB and the European Banking Authority cannot be overemphasized: the tests are not an academic exercise, but part of a larger effort to put the EU banking sector on solid footing and to make credit flow to the real economy and bring back growth and jobs."

"The European Commission will have to ensure that the State Aid rules are fully respected and we look forward to hearing Commissioner Margrethe Vestager at the ECON Committee on 11 November. It is extremely important to ensure a level-playing field."

The ECB, which takes over as supervisor for the region's top 120 banks on 4 November, has had officials trawl more than 40 million individual bank figures. The exercise had two parts - a strict review by the ECB of assets such as loans, followed by a wider test of how banks would cope with a new economic crash.

It is the fourth attempt by Europe to clean the stables of its financial sector and has been billed as much the most rigorous.

Previous efforts failed to spot problems, giving lenders in Ireland a clean bill of health shortly before a banking crash drove the country to the brink of financial collapse.